There is strikingly good news this year about the Bay’s oxygen-deficient “dead zone,” both in the Maryland and Virginia portions of the Bay.

In Maryland, the Department of Natural Resources (DNR) reports the second-smallest dead zone seen since monitoring began in 1985. In Virginia, it was smaller than 80 percent of dead zones reported in the 35 previous years, according to the Virginia Institute of Marine Science (VIMS).

The “dead zone” refers to anoxic (no oxygen) and hypoxic (little oxygen) areas in the water, which stem from nutrient-rich runoff, where marine life struggles to survive. This year’s dead zone started later and ended earlier than it has in the past several years. Additionally, no anoxic areas were noted in the mainstem of the Bay this year.

In the June 2020 dead zone forecast, the Chesapeake Bay Program and its research partners predicted a slightly smaller than average dead zone this year due to reduced spring rainfall and thus, reduced runoff from the watershed. They were right, and the Bay did even better than the prediction thanks to the addition of unseasonably cool temperatures we saw in May and September.

“The amount of hypoxia is a key indicator of Bay health. After two years of extremely high flows and greater than average hypoxia, it is encouraging to see improved oxygen conditions in our bottom waters providing suitable habitat for fish, crabs and oysters. It is Maryland’s goal, along with our Chesapeake Bay Program partners, to reduce nutrients and sediments entering the Bay to levels that support good water quality for our iconic Bay species,” says Bruce Michael, DNR Director of Resource Assessment Service.

Strategies put in place to reduce nutrients and sediment in the Bay are working, and the Chesapeake Bay Foundation says now is not the time to let up. In a statement, CBF Director of Science Beth McGee says:

“We’re encouraging states to figure out new ways to reach pollution reduction goals, including by adding more natural filters to the landscape such as trees, grass pastures, and wetlands. Doing so will increase the resiliency of the Bay and help it handle the influx of nitrogen and phosphorus pollution.”

CBF points out that the overall trend of improvement suggests the Bay is “responding to pollution reduction efforts by starting to help itself.”

A 2018 University of Maryland paper show that as the dead zone grows smaller, bio-chemical changes take place that leave less fuel for algae and oxygen-consuming bacteria. 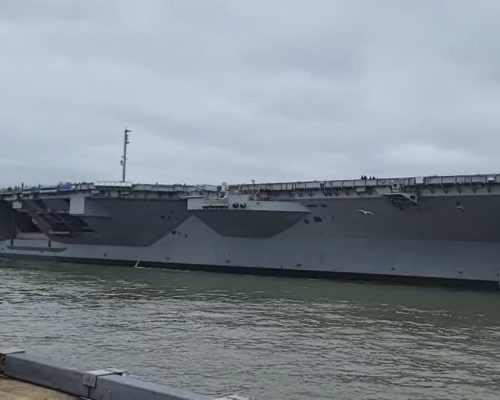 With surprisingly little fanfare, the future of the U.S. Navy’s aircraft carriers left the pier

A family outing on the boat turned dangerous off of Kent Island this past weekend.

You’ll want to leave your high heels and handbag at home for this ladies’ brunch.