Fatigue was evident in the voice of Captain Jake Hiles when he spoke to Bay Bulletin the day after setting a new Virginia state record for bluefin tuna. The owner of Matador Sport Fishing Charters had good reason to be exhausted—the beastly fish weighed 708 pounds and measured 109 inches long. That in itself is an impressive feat but the entire experience was chock full of wild events.

Hiles was with his friend and mate Jeff Landis (from Ocean City, Maryland) aboard Hiles’ boat Toro out of Rudee Inlet when they caught the bluefin that bested the late Chase Robinson’s 2015 record of 606 pounds. Hiles was a friend of Robinson’s, and happened to be part of that record-setting crew in 2015. After breaking his old friend’s record, Hiles acknowledged Robinson, posting on his Facebook page, “This one’s for you Chase. Rest in Peace buddy.”

The significance of the record Hiles broke isn’t the only remarkable part of the fish tale. Their fishing trip was unusual from the start.

Saturday morning, Hiles and Landis “steamed from Rudee Inlet determined to catch a giant bluefin tuna,” Hiles says. The bite was four hours away, so the pair ran approximately 80 miles to an area off North Carolina Hiles calls “the tuna hole.” In sloppy, confused seas they trolled through a warm-water eddy that spiked off the Gulf Stream, and pretty quickly were hooked up.

“Right away I knew it was a really big bluefin,” he told Bay Bulletin. But this catch wasn’t meant to be. In a bizarre ending to the battle, the fish went ballistic and committed a kind of piscatorial harakiri by impaling itself on the boat’s rotating propellor. Hiles said he was sad watching the sonar as the “amazing creature just drifted to the abyss.”

After nightfall they drifted dead bluefish and a 3-D printed soft plastic tinker mackerel imitation they made called “Stinky Tinky.” After they safely released a 10-foot scalloped hammerhead shark, they reset the baits back out and soon hooked into a really strong fish. Yet something seemed off, Hiles explains. It turned out a mature bottlenose dolphin was entangled, but not hooked, in their lines. This was a first for him in twenty years of professional fishing. They untangled the marine mammal and it swam away unharmed.

Exhausted, Hiles tried to nap but was roused by Landis’s shouts around 4 a.m., “We’re on!” Pandemonium ensued with multiple hook ups. Landis cleared one rod, then quickly released a 100-pound mako shark. Hiles was hooked into a large tuna on an eight-foot, unlimited class rod built by Anglers Envy that was matched to a two-speed Penn 130vsx spooled with nearly a mile of mono. The rest of the rig included twenty feet of 250-pound Momoi extra-hard monofilament leader, a Spro 370-pound wind on swivel on one end, and an Eagle Claw 10/0 Trokar hook on the other. This was the right outfit to land a giant bluefin.

Instantly, the massive tuna headed for the depths. Here’s an excerpt from Hiles’s account of the catch on Facebook: “After losing nearly a mile of line, I was able to stop the fish with about 100 feet of line remaining on the reel…The saying is, ‘break his will or break him off.’ I broke his will without breaking him off, and now I had a still-very-angry fish, a very long ways away.”

Finally, the fish made one final strong but short run and was now, literally, dead weight.

Defeated, the monster bluefin was secured with a swim tool in the fish and the flying gaff cleated off. They waited for the sun to come up.

“I sat there and thought about Chase for a few minutes, thanked God first and Chase second for watching over me, for giving us such a beautiful morning, and giving me that fish,” he shared on Facebook.

Then the real work began. Hiles says it’s easier to hook a 700-pound fish then drag it aboard, especially for two exhausted anglers. Their problem was compounded because Jake didn’t have his chain fall (a type of hoist) or a ratchet strap on the boat. At first they tried to horse it through the tuna door, even putting the boat in reverse to try and squeeze it through. No dice.

Necessity being the mother of invention, Hiles brought the anchor line from the bow and cleated one end at midship. Then he ran the other end through the fish’s mouth and out the gill, pulled the rope tight and tied it firmly to the base of the greenstick. He stuck a gaff in between the two ropes and started twisting.

“I think that’s called a rope screw, but either way it worked,” he said.

After nearly two hours, they finally set a course for home. Weigh-master Charlie Laurens and a crowd had gathered at the Virginia Beach Fishing Center. They cheered when the scale pushed past 700 pounds. Lewis Gillingham, director of the Virginia Salt Water Fishing Tournament, arrived later to begin the certification process.

Because Hiles caught the record bluefin recreationally and not with his commercial permit, he could not sell it. So he spread the word via social media he was giving away fresh sushi-grade bluefin tuna. Within an hour a huge crowd gathered at the fishing center to see the behemoth fish and take home dinner.

“I thought it would be neat for people to come experience this amazing fish. Hundreds of people went off with sushi,” he shared in a post. “Not an ounce of the fish was wasted.” 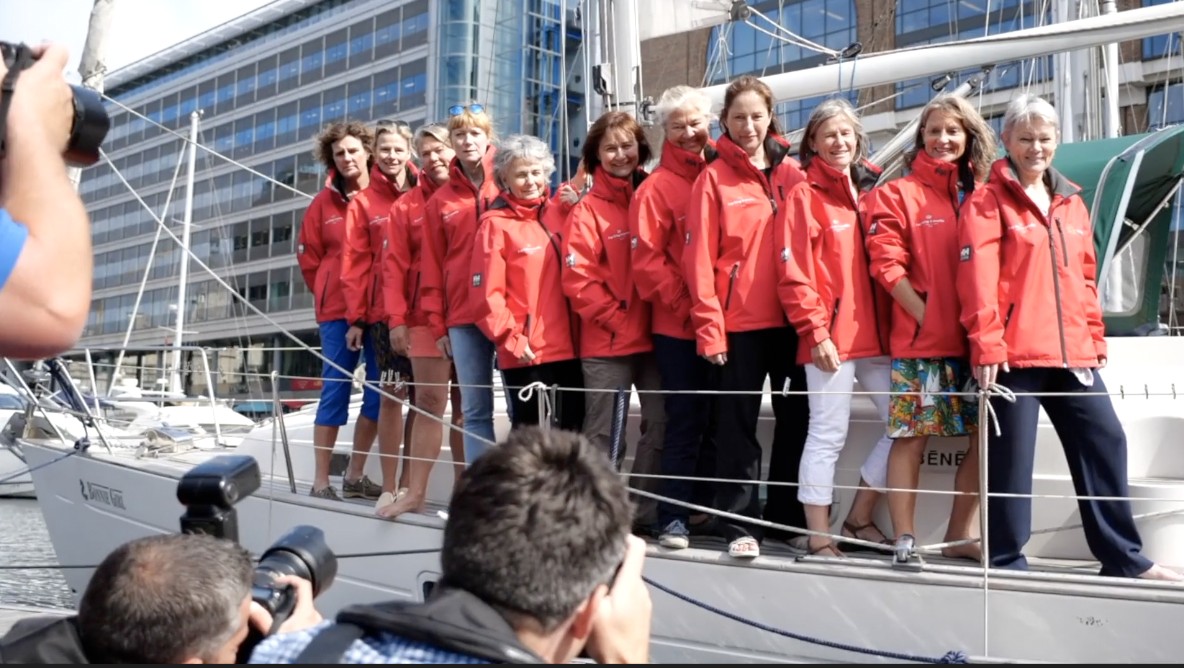 "If I Can Do This, Anyone Can": The Chesapeake Bae Sets Sail