Yock—this peculiar name is attached to history, culture, tradition, and big flavors. It’s a delicious bowl or carry-out box filled to the brim with tangy, spicy noodles, broth, soy sauce, meat (sometimes shrimp), and a hard-boiled egg topped with chopped onions. Variations of its basic ingredients (and spellings) are found as far away as Canada and as close as Maryland and Virginia. In New Orleans, the culinary second-line staple is known as yaka mein or Old Sober (for its ability to loosen the grip of the previous night’s revelry). In Baltimore it’s sold in Chinese restaurants as yat gaw mein. Tidewater Virginia restaurants sell it as a box of yock, which translates loosely to a box of noodles. In Cambridge on the Eastern Shore of Maryland, it’s simply known as yock.

The provenance of this dish is as varied as its many phonetic spellings and ingredients. New Orleans history traces yaka mein to the arrival of Chinese immigrants. Food historians attribute its Virginia origins to the state’s segregation laws that prevented Chinese restaurants from opening anywhere but in African American communities. Chef Will Leung-Richardson of Richmond’s KudzuRVA agrees. “Those circumstances created a dish that bounced back and forth between the African American and Asian communities,” he says. “The result was a culinary fusion that would have not otherwise come together. As someone who is half Cantonese, half Virginian, yock is a point of pride for me. I believe that yock has a history that deserves to be recognized. Culturally and socially, yock has the power to bridge more gaps than ever before.” Chef Will’s connection to yock is firsthand. He grew up in Chesterfield, Va., where his grandparents owned the Moon Gate I. “I’d get off the bus after school and go to the restaurant. If I didn’t have a cheeseburger or sweet and sour pork, it would be a bowl of yock.”

At the same time it was a staple in African American soul food restaurants, alongside fried chicken, pork chops, and ribs. Yock as the centerpiece of African American church fundraising dinners may be the best example of this unique blending of food, history, and culture. Where outsiders might expect the traditional chicken or fish with a side of greens and macaroni and cheese, a box of yock stands that notion on its head. Instead, patrons get a box of Tidewater lo mein noodles with chicken, pork, shrimp, or even sausage. In 2014, The Southern Foodways Alliance, part of the University of Mississippi’s Center for the Study of Southern Culture, published an oral history interview with the culinary staff of the Tabernacle Christian Church in Suffolk, Va. Their yock was always in such demand that people called in, lined up, and travelled from all over to purchase a box from the church’s kitchen. With one-day sales of nearly 300 boxes, it’s no wonder yock deserves the description of Chinese soul food.

Right off the Choptank River in Cambridge, Md., Victoria Taylor, Executive Director of Groove City Black Heritage and Cultural Group, shares her past and present experiences with yock. “Back in the day, most people cooked it at home.” Or bought it from a man nicknamed Florida Boy, who cooked the dish and sold it out of his house. “It was always available,” Ms. Taylor recalls. “We don’t know if he was from Florida or Jamaica, but he definitely wasn’t from Cambridge.” When Streeters Bar and Club was in business, yock was always on the menu. Florida Boy and Streeters were tied for the best yock in town.

As far as Ms. Taylor knows, Cambridge yock has no Asian connection, nor is it similar in taste to Baltimore’s yat gaw mein. On a trip to the city she sampled the version offered in a Pennsylvania Avenue Chinese restaurant. “It was made with thick noodles, spring onions, a brown sauce with soy sauce, and no tomato base—it had a totally different taste.” Cambridge yock, she says, is made from spaghetti noodles, tomato-based sauce, soy, and sometimes Worcestershire sauce. Added to the mix is a choice of meat, a squirt of ketchup, some onions, and a hard-boiled egg to top off the dish. It is seasoned with salt and pepper, hot sauce, and tomato sauce on top. Ms. Taylor’s own menu of chicken and pork yock now includes a vegan version. “We’re well known for our yock,” Ms. Taylor says. “People come from nearby towns to buy from us.”

Although the dish is unavailable in local restaurants, the home cooked, word-of-mouth tradition of Florida Boy and his fellow creators still exists. In this era, the word is spread via Facebook, Instagram, and text messages with a few simple words: “We’re cooking yock. Pre-order by messenger.” In fact, yock culture is so strong in Cambridge that a cook-off became part of the city’s 2018 Groove City Cultural Festival. Out of five contestants, Karen Camper, Vicky Johnson, and Ms. Taylor were named the top three winners.

“Some people try to make it from taste,” she says. The results are often met with the universal, three-word put-down from purists everywhere: “That’s not yock.” These defenders of tradition can be very picky about their regional dish—the ingredients and “the hands that prepared it” are of equal importance. Chef Will can relate. “I’ve been told that my version isn’t authentic,” he says. He describes it as an elevated, even a little “bougie” version of the traditional dish, but still a tribute to the original flavors. Instead of spaghetti, he uses a higher quality noodle and a soy sauce whose ingredients will forever remain secret. It still retains the traditional elements of soy, ketchup, and chopped onion but can be customized to taste with the option of Creole seasoning or different hot sauces. And unlike other yock creators, “we use a soft-boiled egg.” Although KudzuRVA’s menu changes almost weekly, they do run a version of yock fairly regularly.

Greg Shia’s Norfolk Yock Nook customers can relate. “What are you cooking today?” It’s the first question asked when they call or show up at the building at 2400 Florida Avenue. Shia’s foray into the culinary world followed a career in international banking and the purchase of what had once been the Norfolk Noodle Company, since then renamed Fiber Foods. Not only did Shia continue the manufacture of yock, ramen, and wonton wrappers for national and international trade (including Tidewater creators of yock and local Asian restaurants), he began to cook. Instead of creating a traditional Tidewater yock, he decided to “try my own way.”

The Yock Nook, a cash-only, small seating area located in a corner of his manufacturing plant, was born of the desire to discover how his way would be received. Just don’t expect ketchup in any of Shia’s dishes. His is made more from a soup base and a hot spicy noodle bowl that includes his blend of soy sauce, along with meat, chicken, and vegetables.

“The hot and spicy broad noodles are very popular,” he says, adding that New Orleans yaka mein is most similar to his creations. As a side dish, Shia offers “beef bunnies,” meat-filled wonton wrappers whose tops are tied together to resemble bunny ears.

The Yock Nock is seasonal, so check before you go. Potential summertime customers should know that Greg Shia hates flies. When the weather warms up and the buzzing begins, he stops cooking.

If your taste buds have been piqued, try some of these flavor combinations at home. With simple ingredients to build a dish, it’s hard to go wrong. If your happy place is at the intersection of food history and memorabilia, go on the hunt for a copy of La Choy’s 1935 cookbook and its recipe for Yet-Ca-Mein. If you’re looking for a thoroughly modern version, try Food Lion’s Tidewater Virginia recipe at foodlion.com/recipes/tidewater-virginia-yock-a-mein. KudzuRVA keeps their schedule up to date on Facebook, and Groove City Culture Fest’s website and Facebook page are other great resources for Cambridge events.

Niambi Davis was raised on the Eastern Shore of Maryland and takes every opportunity to share her love of the Land of Pleasant Living through words and pictures.

This base recipe only takes about 2 hours in a pressure cooker (should you decide to make your own broth) or as little as 20 or 30 minutes if you use store bought. The best thing about this recipe is that it can be made with any kind of broth, from beef to vegetable, and you can incorporate any proteins and vegetables you choose.

Place all ingredients in pressure cooker and fill with 3.5 quarts water, or to just under the max line on a 6-quart pressure cooker. Cook on manual pressure (high setting) for 1.5 hours and slow release.

*If you don’t have a pressure cooker, you can place all ingredients into a stock pot with the same amount of water and simmer at medium low for 3.5 to 4 hours.

We prefer specially made yock noodles from Fiber Noodles in Norfolk (www.fiber-foods.com), a family owned noodle company that’s been making noodles for almost 100 years. However, any noodle from spaghetti to ramen can be used.

The version we serve at Kudzu has included toppings like collard greens, pulled pork, cracklins, even Virginia peanuts. At home, we use whatever we have on hand: meat pulled from a whole roasted chicken, scallions (vidalia or sweet onions are great, too!), togarashi (a Japanese ground chili and sesame seed blend), a soft-boiled egg (hard boiled is also common), and Crystal hot sauce.

Using this recipe as a guide, you can satisfy that yock craving right at home any night of the week. Cheers and enjoy!

Chesapeake Chef: Barbara’s on the Bay

How one woman started on Wall Street and ended up owning a shoreside restaurant in Betterton, Md. 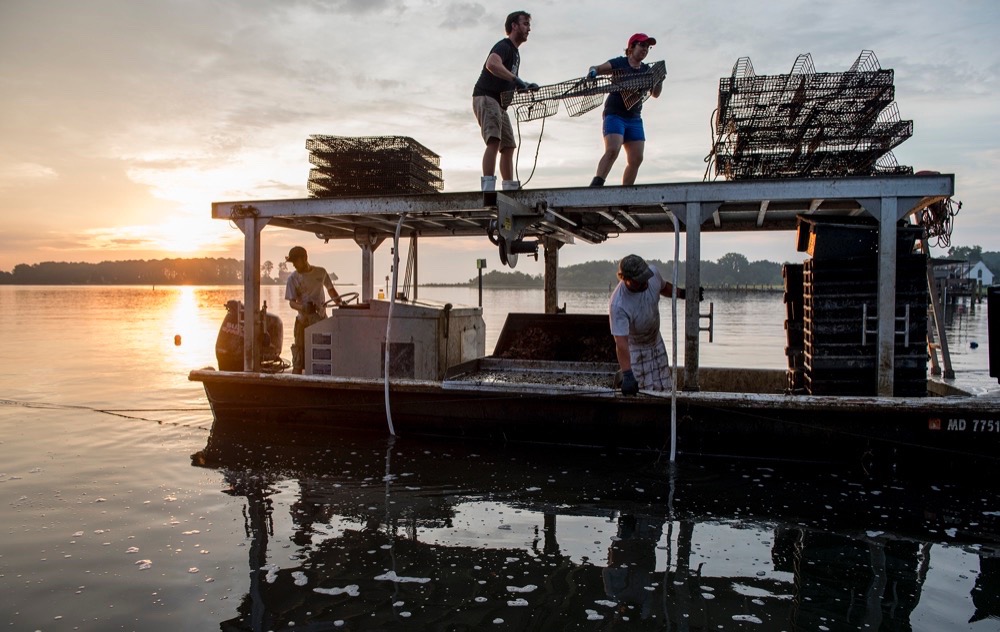