Everyone who grew up in St. Mary’s County knows about Scheible’s fish camp. Built in 1946, this family-run fish camp and restaurant was a favorite for charter captains around the Bay for 50-plus years. So when Oklahoma-born, D.C. transplant Peggy Binzel decided to turn it into something else, she knew she needed to tread carefully, respecting the past while birthing a new concept. The result is Pier450, a mid-century style motel and restaurant with a cheeky feel that nods to its roots while offering something completely different.

If you haven’t been to St Mary’s County in a while, you’ll find that not much has changed—and that’s exactly the appeal. There are no big-box stores, no traffic jams, no hustle and bustle; just acres of rolling farmland, plentiful boat launches and back roads, a few mom and pop shops, and some of the prettiest beaches around the Bay. It’s the latter that first drew Peggy Binzel to St. Mary’s County back in 2007, when she was working in communications in Washington, D.C. and looking for a weekend escape.

“I was looking for a beach house that was two hours from Washington and didn’t involve crossing the Bay Bridge,” said Binzel. “I knew nothing about St. Mary’s County. By process of elimination, I ended up finding this house that needed renovation in Scotland. I saw the photos, and said to the realtor, ‘This is it.’”

She started coming down on weekends and fell in love with the area, as did the friends who accompanied her. She decided to buy a second house on a larger plot of land, intending to renovate it and sell the first. Then came the real estate crash of 2008—so she changed tack. “It was very early in the vacation rental business. But I thought I’d give it a try, and it worked.”

That impulse eventually turned into Scotland Yards, a collection of 10 luxe vacation cottages tucked in a quiet neighborhood just down the road from Point Lookout State Park. Guests love the tranquil setting, but when asked if they had any suggestions for improvement, she consistently heard the same request: more dining options. Courtney’s is a nearby staple that serves up seafood in a down-home, no-frills setting, but for variety you need to drive 30 minutes back up the peninsula, to Leonardtown.

Enter Scheible’s Restaurant and Fishing Center. The family-run fish camp flourished for decades, running charters off of its long pier. Generations of kids and adults worked there seasonally, managing boat traffic, helping clean the catch, or feeding hungry fisherman. After the charter fishing business took a tumble in the late 1990s, the Scheibles sold it. It went through a few iterations as a restaurant, but then sat empty, like so many businesses in rural parts of the region.

“It was probably two or three years that it sat vacant on the market,” said Binzel. Folks suggested she buy it, but she had never run a motel, let alone a restaurant. “We always talked about it, and worried that if someone bought it and used it for some other purpose, we’d lose it forever,” she said. So she secured the financing and went to work.

Renovations began in summer 2019. Local building codes meant they had to keep the property’s existing structures and footprint, which was both a blessing and a challenge. For example, each motel room was a scant 246 feet, with shower-stall bathroom—all that a fisherman needed on a charter in the 1950s, but not ideal for today’s vacationers.

“I love designing for small spaces; it’s one of my passions, because I really do think we can live smaller,” said Binzel, who did the interior décor with help from collaborator Paul Haynes. She raised the ceilings in the rooms and restaurant, revealing the wooden beams beneath them. In the motel, now renamed The Quarters at Pier450, colorful Moroccan-style tiles brighten up the bathrooms, and organic cotton mattress offer a sweet sleeping spot. Each room has its own theme and decor, like the Texoma, which nods to Binzel’s roots with a longhorn mount and a cowhide rug. Many of the furnishings were acquired at estate sales, collected with no plan but ‘That’s cool, let’s get it!’ In the lobby, an antique sofa gets new life with a perky striped fabric. The Union Jack armchair in the bar sits opposite a painting by a MICA graduate, who reached out to Binzel one day thinking she might like it. It sounds disparate, but it works.

Transparency was key to Binzel and her team, so throughout the 15-month renovation process they shared their progress on social media. “We wanted people to be excited, but we knew that there would be skepticism, too,” said Pier450 partner and chief marketing office Cathy Austin. “This was childhood for a lot of people.”

“We had a lot of interaction with Scheible’s alum—people who worked there and people who had been customers,” said Binzel. “We talked about how we wanted to maintain some things—continue the focus on seafood, for example—but also said it wasn’t going to be the same.”

The new Pier450 debuted in fall 2020, and the restaurant, named POV, is at the heart of it. The bright, cheery dining room connects to a cozy bar, and a half-open kitchen. Outside are bistro tables, an outdoor dining deck, and a lawn with plentiful fire pits that leads down to the beach. The original Scheible’s sign hangs in the back, while a colorful mural from local artist Molly Hewitt reminds visitors, “The world is your oyster.” The namesake pier extends 450 feet out into Smith Creek, perfectly primed for sunset viewing.

Binzel’s aim, food-wise, was for “casual fine dining” that fits the Bayside setting. The kitchen is led by chef Carlos Gomez-Starnes, whose background includes The Mayflower and Hay-Adams hotels in DC. His menu features Bay-centric dishes such as Maryland-style crabcakes and gumbo topped with pan-seared rockfish, and he brings an international influence with his stellar Spanish paella, as well as weekly themed dinners focused on cuisines from Cuba to New Zealand. They source as much as they can locally, and have big plans for the onsite garden.

Despite opening off season in a pandemic, Pier450 is already a hit. Reservations are strongly suggested on weekends, when dinner specials and brunch bring people down for the night or the weekend. Summer will bring a whole lot more, including loaner kayaks for exploring, live music, and sunset cruises.

“I am incredibly excited about Pier450 and proud of the work that they have already done,” says District 1 Commissioner Eric Colvin, who helped Binzel and her team navigate the county’s Byzantine regulatory restrictions. “They were able to overcome multiple hurdles in order to create an absolutely stunning experience. The desire of the owners to honor and respect the history of Scheible’s is a huge part of the success [and] …creates a true gem in the southern part of St. Mary’s County.”

I went down for a midweek stay in early February, to meet up with the original Scheibles. Captain Bruce and his wife Sally live just down the road from Pier450, and daughter Ellen had flown from Boston for the occasion. When I got there, they were clustered around a low table in the corner of the bar, happily digging into some local oysters and crab balls as they waited for some friends to come by. “I poured these floors by hand,” Captain Bruce said, directing my attention down. “That floor that you’re standing on is 15 inches deep!”

His daughter Ellen agreed. While the bones of the original Scheible’s are evident at every turn, Pier450 is something new, in a good way. “The only way that somebody could make a place like this work is to do something radically different from what it was as originally,” she said. “By turning it into something different, you maintain that space and respect that space but turn it into something that’s your own. That’s when you have the opportunity to move it forward.”

Susan Moynihan writes about travel and food, and is the author of 100 Things to Do in Annapolis and the Eastern Shore. Follow her at @susanmoynihan.

A Different Kind of Trail

If you what you crave is food for the soul, look to the Northern Neck Artisan Trail. 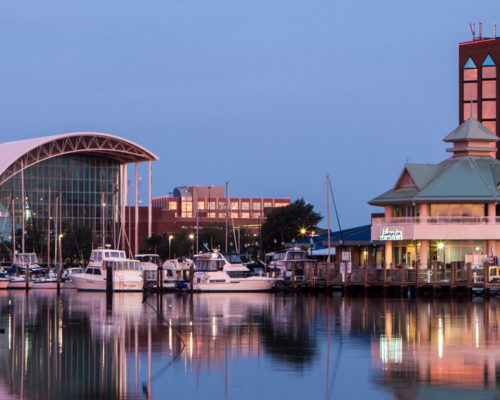 Fast facts Located at the southern tip of the Virginia peninsula, at the mouth of