For this travel-themed issue of Chesapeake Bay Magazine, On Boats offers Bayliner’s new Element M17. Why? Well, it’s roomy and stable enough to carry six adults or a family but relatively inexpensive, fuel-efficient, simple to care for, and most of all, it’s easy to tow to launch ramps all over the Chesapeake behind a mid-sized SUV or small pickup.

The M17 qualifies as a small deckboat because its M-hull shape carries the beam forward, creating a spacious bow compartment for two forward-facing lounges or seating for four. The cockpit offers a helm console to starboard, with the skipper sitting on an upholstered bench that extends across the transom. In place of a port console is an aft-facing seat. A square cushion can drop into the space between it and the aft bench to create a lounge. The after side of the transom has a pair of cushioned seats molded in port and starboard for lounging while at anchor or beached. The loungers’ feet fall naturally onto the two swim platforms on either side of the outboard. The starboard platform holds a telescoping stainless swim ladder with a handy grab handle molded into its base. In between the two lounge seats, there is a molded-in cooler for food and beverage, and just behind it, a sturdy mount for a ski pylon. Bayliner places cupholders and grab handles in appropriate locations throughout the boat. Storage includes space inside the two consoles, in open wells on top of the consoles, and under the bow seats.

True to deckboat tradition, this overall layout makes the Element M17 a good choice for exploring new waters, swimming and tubing, and enjoying picnics or sunset cruises. While the standard Mercury 60 EFI Four-Stroke is superb engine (I own one and love it), it’s too small for most uses of the M17. The best choice is the Merc 90 EFI Four-Stroke that powered our test boat. It’s strong, smooth, quiet, and efficient, with the right amount of shove to carry six people or tow tubes, boards, and skis. The stock propeller is a Mercury Spitfire aluminum four-blade, which offers great lift, acceleration under load, and trim control (my Merc 60 runs one).

Nevertheless, there are qualifiers. The M-hull is inherently stable, a characteristic we noted while drifting side-to a 1–2′ chop in the Potomac off the mouth of the Occoquan River below Mason Neck. The trade-off is that the broad center section of the hull came down hard in that chop if driven fast. It’s a typical afternoon condition on the broad sections of the Chesapeake’s tidal rivers, so the M17 requires some adjustments to be comfortable.

First, there’s the issue of balance. Bayliner’s engineers have mounted the 18-gallon fuel tank and the battery under the transom seats, with the cooler between them, and the helm seat is far aft, essentially in the cockpit. With DJ Phillips of Prince William Marina and me sitting there, our tester was stern-heavy, causing the bow to rise high enough as the boat climbed onto plane that we lost sight of the water ahead. The situation improved greatly when DJ moved to the port bow lounge. Adjusting passengers’ seating locations will be critical to satisfactory performance. Storing normal gear such as skis, tools, first aid kit, and anchoring gear on board in the two compartments under the bow lounges will also help counteract the weight in the stern. With the test boat’s balance adjusted, the Merc popped it up onto plane quickly with minimal bow rise and good sight-lines. The Spitfire propeller helped the rig stay on plane down to around 10 mph, which eased the ride into the Potomac’s wind-driven chop. That capacity to stay on top comfortably at low speeds will be important for an owner sooner or later when confronted with a run home in a typical Chesapeake afternoon southerly breeze. Running with the wind in the more protected water of Belmont Bay, the boat topped out at 36 mph and cruised happily at speeds throughout the 20s. Acceleration is strong enough to make sure passengers make use of the well-placed grab handles.

Balance played a role in one last trick on test day. At lower planing speeds running into quartering seas, the M-hull threw spray up high enough for wind to blow it aboard until DJ and I shifted our weight. That move raised the windward side a bit, which helped damp the spray and smooth out the ride. On a larger boat, trim tabs come in handy for adjusting side-to-side trim, but on a boat like the M17, careful weight-shifting works just fine.

One aspect of the M17 was too simple, though: The dash includes an analog speedometer with gas gauge and voltmeter but no tachometer. In addition, the speedometer proved to be off by about five mph at higher rates but did not begin reading until about 15 mph. Yes, the Element M17 is considered a good boat for beginners, but part of learning safe boating is paying attention to getting the best performance out of a hull and its engine. Having a tach to match engine rpms with operational “feel” is fundamental to that process. Fortunately, Mercury and Bayliner (both brands of Brunswick Corporation) offer a solution: the optional VesselView Mobile system. It’s actually a smartphone app, so it’ll require a dash mount for the phone (which preferably has a splash-proof cover). VesselView is a Mercury SmartCraft system that provides comprehensive engine information including not only rpm but also fuel consumption (instantaneous and cumulative), operating temperature, and engine hours—all useful for learning to operate and maintain a significant investment like the Merc 90. In addition, the phone can become an instrument for at least rough navigation with an inexpensive annual subscription to a C-MAP or Navionics charting app (around $15).

For those who might be tempted to question the quality of Bayliner boats, please understand that whatever the brand’s history (the company is celebrating its 65th anniversary this year), under Brunswick’s ownership, it has won seven consecutive Customer Satisfaction Index awards from the National Marine Manufacturers Association. Both of its Chesapeake dealers, Prince William Marina in Woodbridge, Va., and Riverside Marine in Essex, Md., are multi-generational family businesses with strong reputations for good service. Both report minimal problems with warranty claims on their customers’ Bayliners.

So how does Bayliner keep the cost of an Element 17 down? Construction is simple. For example, the seat cushions fit over storage areas but drop into place without hinges, which saves not only hardware but also assembly time in the plant. The base model is stripped down, as a look at the company website’s Build & Price section will reveal. Our test boat, which had just been sold, included the M Comfort Package ($3,125), including a 6′ Bimini top with boot, a 500 gph-automatic bilge pump, hydraulic steering, a waterproof 120-Watt AM/FM stereo with Bluetooth, a snap-on bow well and cockpit cover, a ski tow pylon, a bow filler cushion, stainless-steel fittings, and a port-side lounge seat. It also included twin acrylic windscreens ($260); SeaDek cushioned, nonskid cockpit flooring ($725); and a digital depth sounder in the dash ($360). To those options, I recommend adding a galvanized trailer ($290, instead of the standard painted one) and the aforementioned VesselView Mobile engine data system ($250). All told, the MSRP for such an Element M17 would be $30,265 excluding dealer preparation fees, taxes, registration fees, or other fees that may apply. It makes a nice, multi-purpose package for exploring the waterways in this TRAVEL issue of Chesapeake Bay Magazine. See you on the river! 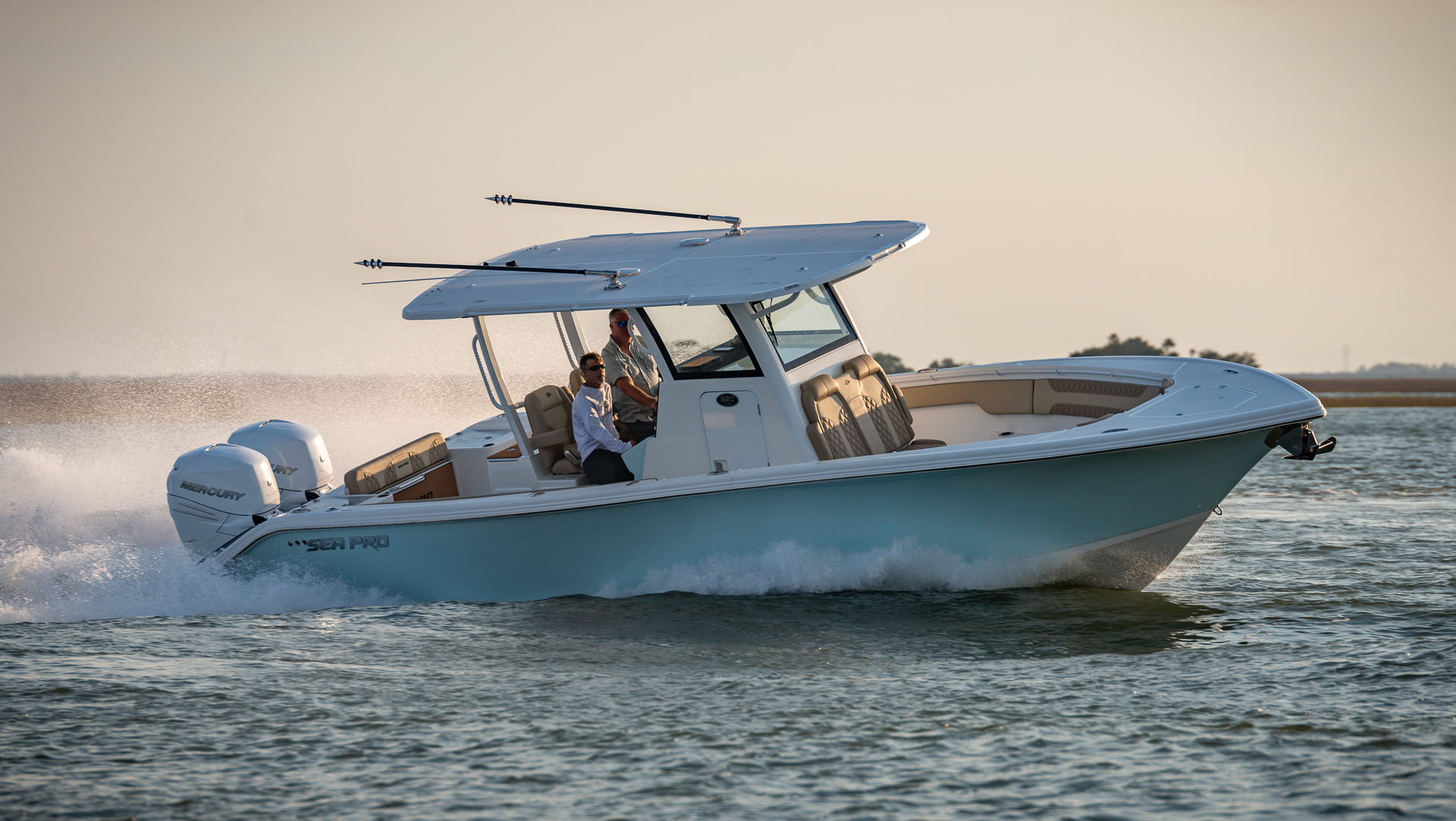 “If there’s a way to include more functionality per foot, our engineers will find it.”