Boston Whaler’s new 360 Outrage is a 21st-century hardcore fishing boat that can also serve well as a dayboat for a family or a group of friends. The console is large enough to offer a climate-controlled cabin with standup headroom, an electric toilet with holding tank (10 gal.), a freshwater sink, and a comfortable berth for children’s naps or even Spartan cruising for a couple. The characteristic unsinkable Whaler hull offers enough buoyancy to host up to 14 people.

These engines turn dual-mode 48V/12V alternators to feed Navico’s integrated, digital Fathom e-power auxiliary management system, including lithium-iron-phosphate batteries and an inverter (120V), allowing features that would otherwise require a generator. The Fathom system drives digital steering and controls (including a joystick), air-conditioning for the cabin and helm, a Seakeeper gyro stabilizer, lighting and plumbing, a pressurized freshwater system (45 gallons, 6 hot), a refrigerator/freezer, an optional electric grill on the transom, a stereo system with satellite radio, a bow thruster and an anchor windlass.

A monitoring system at the helm keeps track of everything through a complex wiring harness based on a marinized version of the electronic cables that undergird our cars and trucks. It’s housed in twin Simrad electronic displays (16” or 19”) connected to a GPS, detailed digital charts, a VHF radio with Automatic Identification System (AIS), high-power sonar with down-scan and 3-D display, digital radar, thermal night vision and a theft deterrent system. Our test boat included also a full upper helm with steering, joystick, controls and a single Simrad display.  Optimum cruising speed for this boat/engine combination is 30 knots with top speed over 50. With a fuel capacity of 415 gallons, cruising range at 30 knots is over 300 miles, assuming a 10% safety margin.

Our sea trial showed this high-powered, big water beast is civilized enough to excel at simpler angling challenges. Rick Boulay Jr. of Chesapeake Whalertowne and I took our tester up to the eastern rock pile at the Bay Bridge off Annapolis and up the Severn River. Jigging for rockfish and big white perch at the former requires maneuvering carefully through the eddies formed by powerful currents and holding position to keep anglers’ lines vertical in that deep water. For that job, the 360 was a sweetheart, with the huge but silky-smooth Mercs idling quietly, shifting in and out of gear smoothly. She was even maneuverable enough to position for an angler in the bow to cast and swim a bucktail precisely along the underwater ledges of the bridge pilings. Up in the Severn, she held perfectly over corners and patches of fish on the river’s restoration oyster reefs in 12–25’ of water.

We throttled her up to run from place to place, and the 600 Verados are remarkable. They’re amazingly quiet and smooth, thanks to Mercury’s dedicated Noise/Vibration/Harshness (NVH) engineering laboratory. The torque from the big-block V-12 powerheads and the dual propellers comes on immediately, thanks to the low first gear in the two-speed transmission. As the boat accelerates, the transmission shifts imperceptibly to the higher gear, as smoothly as the best modern automotive transmissions. We’ll take it on faith that they’ll push this 20,000-lb. rig over 50 knots, since we were happy cruising in the 3,200–4,000 rpm range (15–30 knots), where Mercury’s Active Trim system kept the hull cleanly on plane. The 360 Outrage clearly showed a wide range of efficient speeds that will allow her skipper to adjust to any sea conditions she should be out in. 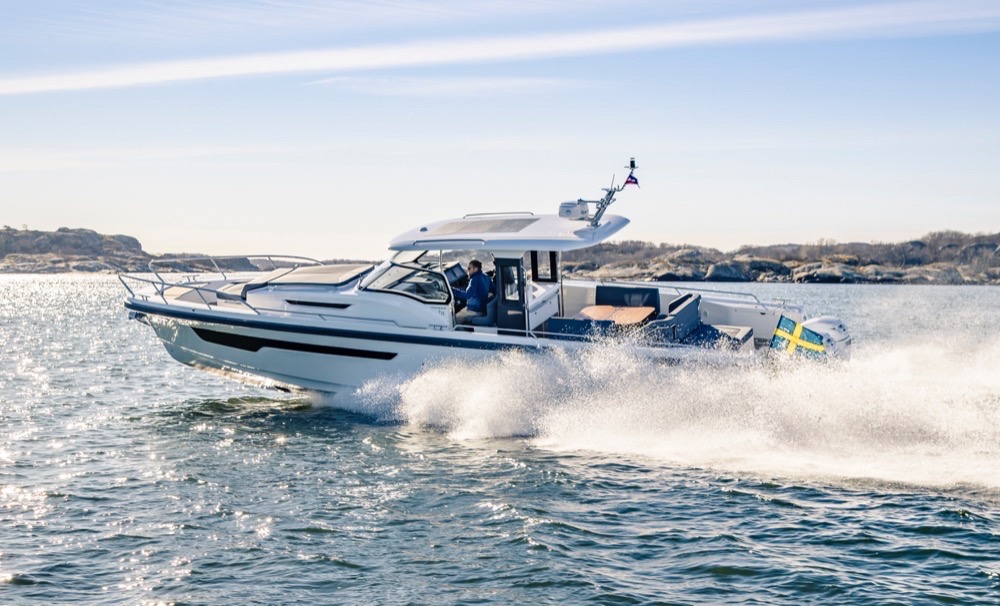 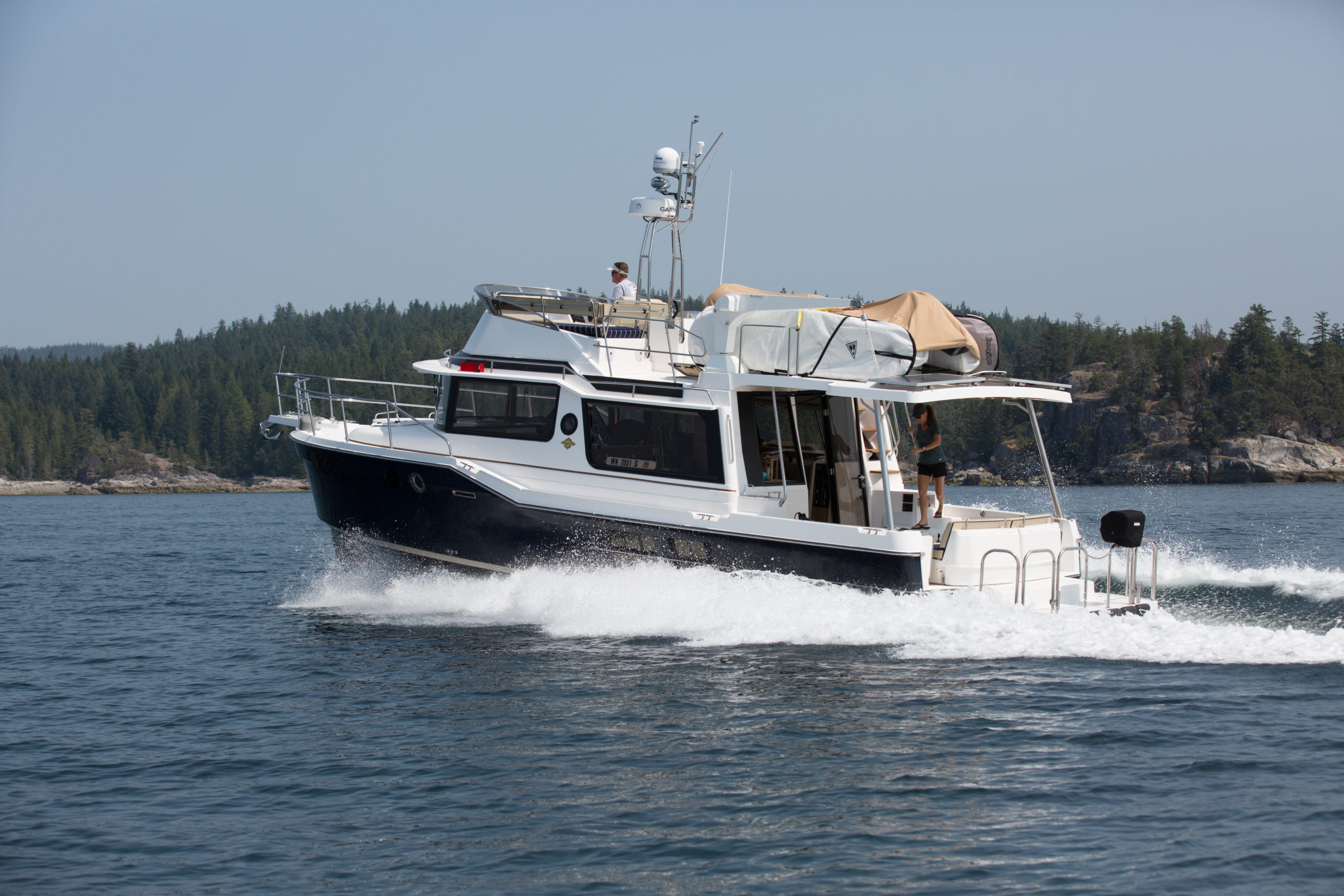 by Capt. John Page Williams When we took a sea trial of a Ranger R-43

The EdgeWater 230CX makes it all work in a handy package.