The director of the Chesapeake Bay Program (CBP), Nick DiPasquale, got a holiday surprise at a routine committee meeting this month.

The secretaries of Maryland’s Department of the Environment and Department of Natural Resources, respectively, Ben Grumbles and Mark Belton, respectively, recognized DiPasquale for his numerous achievements in Chesapeake Bay conservation, and gave him the ultimate honor of being named the latest Admiral of the Chesapeake.

That title is described as:

“A lifetime achievement award, and the highest honor the governor of Maryland can bestow on an individual for their environmental contributions. It is awarded to those who have demonstrated an extraordinary commitment to the conservation and restoration of the Chesapeake Bay, its surrounding landscapes and the life that inhabits them.”

DiPasquale, who plans to retire at the end of the year, oversaw the development of the Chesapeake Bay Watershed Agreement in 2014. The agreement brings together the six Bay watershed states plus Washington, D.C., the federal government, and the Chesapeake Bay Commission. The nine entities work together to conserve and restore the Bay watershed, looking at the whole ecosystem, not just water quality.

Under DiPasquale’s leadership, the Watershed Agreement has seen upgrades to water treatment plants, thousands of miles opened for fish passage, and reductions in nitrogen in the air. In the three years since it started, underwater grasses, water clarity, crab populations, and sediment pollution have all improved.

CBP’s director has also looked to the next generation of conservationists, spending countless hours speaking at colleges and universities.

Before becoming director of CBP, DiPasquale worked in Pennsylvania and Delaware’s environmental agencies as well as private groups. He also once served as U.S. Navy nuclear submarine reactor operator on the U.S.S. Stonewall Jackson.

In retirement, DiPasquale promised he would continue to be a vocal champion of Chesapeake Bay issues. 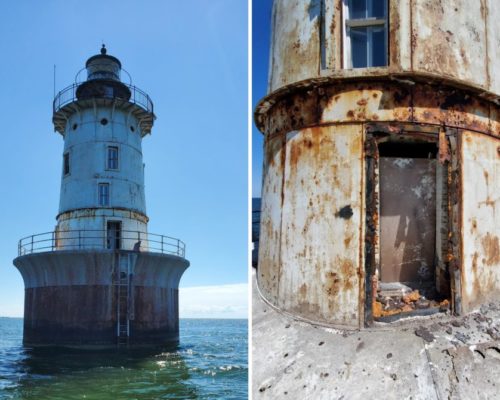 It’s a surprise ending for the public auction of a 120-year-old Chesapeake Bay lighthouse. When

After a year-long hiatus, the Schooner Sultana will raise her sails in Chestertown, Md. once