Bald eagles don’t need a long runway to take flight, but they appear to enjoy hanging out on one anyway.

That’s the case for a convocation of as many as 50 eagles that have been gathering on the airstrips at Naval Air Station Patuxent River on fall mornings—causing problems for the aircraft that need those runways to take off.

Conservation officials at the base have begun a months-long study of the birds to better understand why they’re spending more time in the area and on some of its most mission-critical stretches of asphalt.

Crews already band and monitor the activities of resident bald eagles on five nests on or near the 7,000-acre airfield. But the group of birds that spends time on the airstrips appears to be just passing through, showing up in large numbers on cool mornings in September and October.

More information about these eagles would help the base avoid another midair—or mid-airstrip—meeting between bald eagles and the base’s fleet of flyers, including V-22 Ospreys, F/A-18 Hornets and P-8 Poseidons.

In October 2019, a bald eagle caused nearly $4 million worth of damage to the engine of a large E-6 Mercury that struck the bird during takeoff. No personnel were injured, but the $141-million aircraft was grounded for weeks while it was repaired.

“We have always known that eagles have the potential to cause damage, but that was a big one,” Rambo said.

This isn’t the first clash between birds of prey and planes at the air station, which juts into the Chesapeake Bay at the mouth of the Patuxent River. An airplane struck an eagle there nearly 30 years ago. But the base has seen nine additional eagle strikes in the last decade or so, Rambo said. Almost all of them have occurred in September and October.

Over that same decade, the military base began banding and studying the nesting bald eagles and their young that were born on or near the property. None of the strikes so far have involved those resident eagles, Rambo said. That leaves unanswered questions about the traveling eagles that visit their runways each fall.

The base is working with the Center for Conservation Biology, a research arm of the College of William & Mary and the Virginia Commonwealth University, to study this eagle phenomenon over the next year. The effort started with trapping and banding about 10 of the eagles in October.

Bryan Watts, director of The Center for Conservation Biology, said eagles are very sociable and often hang out in clearings near wooded areas, especially in the mornings. It’s “like retired men coming to Hardy’s to jaw and have breakfast,” he said.

Watts’ researchers observed some “classic migration behavior” in mid-October when a group took off from the base on some midday thermals and headed south. Watts said the gatherings on the runways are unique, though, because the mouth of the Patuxent River is not known to host high concentrations of migrating eagles. Eagles from Florida, Eastern Canada and New England are known to congregate in the upper reaches of several Bay rivers, including the James, Potomac, Rappahannock and the area between Aberdeen and the Conowingo Dam.

“We have studied all of these. All are within the lower saline reaches of the Bay and we assume all depend on [eating] spent spawning fish like herring and shad,” Watts wrote in an email. The Patuxent gatherings are unusual, he noted, because they are near the mouth of river where the food sources would be pretty different.

Rambo and his team will use satellite tracking devices to follow the eagles for the next year, which will give them a better idea of why they are coming to the base—and whether they can nudge them toward a better hangout.

Managing bald eagles is a challenge for other airfields in the United States, where the birds are growing in number but still benefit from federal protections. Bald eagles are no longer endangered, but they are protected by the federal Bald Eagle Protection Act of 1940.

The population growth of eagles in some parts of the Bay watershed, especially along the James River, has exceeded expectations in recent decades. That’s true near the Patuxent naval air station, too.

“I started working here in 1981, and it was a rare sight to see an eagle. Now, you can’t walk outside without seeing them,” Rambo said.

Once crews know more about the recent gatherings, they have several options to prevent collisions. One option, Rambo said, is to modify features of the airfield that are appealing to the birds. Already, for example, they keep the grass around its airstrips cut to a height of 7-14 — too long to attract flocks of Canadian geese and black birds.

Crews can also actively deter the birds — think fireworks, whistlers, bangers and bird distress sounds — and got a permit to use some of those tactics on the eagles three years ago, with varying degrees of success.

Another option, especially if the eagles turn out to be at the airstrip for limited periods of time, is to modify flight plans around their presence.

New technology may help, too. The naval air station recently purchased a radar system devoted to identifying and avoiding birds in the air. Getting bird-specific radar and hiring crews to study them is expensive, Rambo said, but so are collisions.

“You could run that radar for 30 years for the cost of that one aircraft mishap,” he said. 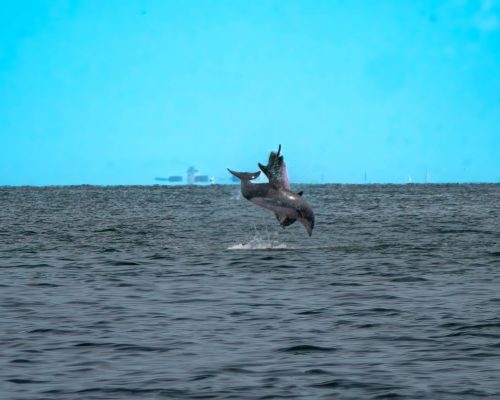 As the Chesapeake DolphinWatch citizen science project wraps up its fifth season on the Bay,

On Thursday, January 9, the Maryland Department of Natural Resources (DNR) will hold a public

On Tuesday in Annapolis, the Coastal Conservation Association of Maryland (CCA-MD) will show a shocking