Getting restless while your boat’s on the hard? You don’t have to. Winter is a great time to cruise around the Bay, even if you need to do it in a car. Instead of summertime crowds, you’ll encounter a whole new set of visitors in the form of locals out enjoying their own towns and wildlife happy to have the run of the place for the season. Here are a few ideas offering unique locations, cozy features and a bonus: discounted rates over what you’ll find at peak season. But great escapes await all around the region. So pack up the car and discover that beauty that is off season.

WEEKEND AT THE WHARF: The Pendry, Washington DC, The Wharf

If you need a reminder that our nation’s capital of marble monuments and grassy expanses is also a riverfront city, head down to The Wharf. This Southwest section along the Potomac has a long history of waterfront commerce that continues today. The piers are home to a working marina, with plenty of slips for residents and transients, as well as ferry service (reopening in March) that connects you with spots like Georgetown, National Harbor and Alexandria.

The complex is edged at the north end by The Municipal Fish Market, the last vestige of the country’s oldest fish market, which still sells fresh and prepared seafood to go. (It opened in 1805, 17 years before that more famous one at New York’s Fulton Street.) The rest of the area has been transformed into a blocks-long waterfront boardwalk with a slew of shops, theaters (including The Anthem, one of the city’s top concert venues) and restaurants, many floor-to-ceiling windows and decks to take in the views. The area is hopping in summer months, as D.C. denizens and visitors come to take in the energy. In the winter, it’s a more serene affair, which is exactly the appeal.

The 131-room Pendry Washington DC towers over the southern Phase 2 of the complex, just finishing completion.It’s a breath of fresh air. Interiors are modern and chic, with emphasis on the views of the Potomac River or the capitol skyline. (Book a riverfront room and you can watch the comings and goings on the river and at DCA from bed.) The stunning penthouse restaurant Moonraker—named after the mast topper, not the James Bond film—features sharable sushi and Japanese whiskeys, with stunning views in every direction, both from indoors and the open-air wraparound deck. Or go old-school with drinks and nibbles by the fireplace in clubby Bar Pendry, just off the lobby. The second-story pool deck is a sweet place to soak up Vitamin D on sunny winter days, and the hot tub beckons the brave all year round. Or hit the eucalyptus steam room before getting a treatment in the spa. And while The Wharf gets quieter in colder months, it never closes. Keep an eye out for events like Curling and Cocktails, and touring bands making a stop at The Anthem, which is a five-minute walk away.

The Middle Peninsula of Virginia’s Chesapeake region is still somewhat of a secret. Although it’s less than three hours from the nation’s capital and half that from the world’s largest naval base at Naval Station Norfolk, you’d never think so by driving the rural byways that wind through the low landscape, home to farms, small towns and myriad small marinas that cater to working watermen and recreational boaters along the abutting York and Rappahannock rivers and their myriad creeks and bays.

Even when you’re driving in, you’d be well served to bring along some inflatable kayaks; Mathews County is considered one of the top kayaking spots along the Virginia coast. And winter is a great time to visit places like New Point Comfort Lighthouse. This 63-foot sandstone tower was commissioned by Thomas Jefferson in 1801, and is the 10th oldest lighthouse in the country. It’s not accessible by land, so drop in a pair of kayaks and explore it at your own pace, without the crowds. If you want to stroll, Bethel Beach Natural Area Preserve’s sandy shoreline is ever-changing and a great spot for beachcombing. Boater’s favorite (and repeat CBM Best of the Bay winner) Hole in the Wall Grill at nearby Gwynn’s Island stays open all year, offering fresh seafood and full-on views of the Bay.

Overlooking a scenic tributary of the East River, Inn at Tabbs Creek is a restful home away from home. The family-run B&B has seven rooms, all unique in style and all with water views. Winter stays are up to 25% off summer rates (and even better on weekdays), which means you can upgrade to one of their three oversized suites, each with its own patio and firepit, plus kitchenette and jacuzzi tub indoors. Ask owners Greg and Lori Dusenberry about their special that includes a complimentary bottle of wine and cheese board on arrival, just to make it that much cozier. If you didn’t bring your own kayaks, no worries; they have some on hand, as well as bicycles for exploring.

Let’s admit it: Kent Island is loads of fun but it can be a challenge in the summer, between Route 50 backups, recreational boaters galore and hopping dock bars at the Narrows. In the winter it’s an altogether mellower affair, a small community left mainly to the residents who live there year-round. Its prime position as the connecting point between Maryland’s Western and Eastern Shores also makes it a magnet for migrating waterfowl, who kick back here on vacation like we humans do in summer.

There are ample ways to see them. Climb the towers at Chesapeake Heritage and Visitors Center for views of the Narrows and Chester River and Eastern Bay beyond, or walk the boardwalk at Ferry Point Park, where swans and snowy owls make regular appearances in the off season. The Cross Island Trail is a paved bike path that runs the length of Kent Island. It gets crowded in warmer months but from January through March you may have it all to yourselves, which means taking it at your own pace with lots of impromptu stops along the way.

Located just off the first east-bound exit from the Bay Bridge, The Inn at Chesapeake Beach Club is a cozy and convenient place to check in.  The inn is a favorite for wedding groups in the summer (their venue is tops in the region) but in winter it’s more low-key, with couples and families looking for a scenic staycation. Choose from rooms in the main lodge, 18 rooms in The Barn or five cottage suites; all are decked out in clubby, homey style. After a day exploring, take a seat by one of four firepits located in across the grounds, and enjoy bites and drinks from the onsite to-go Market or their flagship Knoxie’s Table, known for stellar food sourced from local purveyors. Or stroll across the marina to Libbey’s Coastal Kitchen + Cocktails, which opened in summer 2022 (in the former Hemingway’s space) to regional acclaim. You can use the average $100 off summer rates for treatments at the spa, along with time in their eucalyptus sauna.

Back in the mid-1600s, when Bohemian merchant and cartographer Augustine Hermann was running his farm in what is now Cecil County, Md., he thought that connecting the Delaware River to the Chesapeake Bay would be a game-changer for the region. He was right, but construction on what is now called the C&D Canal didn’t begin until 1824, with the earliest version (hand dug and only 10 feet deep) opening five years later. In 1919, the federal government took over the private project, and today the 14-mile long, 35-deep canal is one of the busiest in the world, bringing freight, cruise ships and recreational vehicles along the watery corridor that saves them approximately 300 miles from going “the long way” around the Delmarva Peninsula.

You can’t visit the C&D Canal Museum in the winter—it’s only open weekends from Memorial Day through Labor Day—but you can walk alongside it; the Ben Cardin C&D Canal Recreational Trail runs 15 miles along the north side of the canal, ending at Delaware City. In winter, canal traffic is more freighters and cruise ships than recreational boaters, and watching them squeeze down the narrow channel and slide under the arcing bridge is a must-see experience. Chesapeake City’s historic downtown, located on the southern bank, is one of the prettiest towns on the Bay. Much of it dates to the mid-1800s, and wood-frame cottages and stately granite halls have been turned into shops, restaurants and B&Bs. The town has winter pop-up events, like the mid-February Sip and Stroll.

Built as a private residence in 1920, the 10-room Ship Watch Inn is the only lodging directly overlooking the canal. Every room has a sundeck facing the water, and most of them have jacuzzi tubs as well, a great place to warm up if you work up a chill. Come weekdays for solitude and pricing specials, or visit on weekends and mingle with other guests in the communal sitting room. You’re a short stroll from historic Bayard House Restaurant, as well as Chesapeake Inn Restaurant and Marina, a popular spot for dock and dines. You’ll have to drive to get to Chateau Bu-De Winery; built on the former land of the visionary Hermann, but their cozy tasting room is a great place to toast to his vision, and to the melding of past and present.

Contributing Editor Susan Moynihan is a longtime travel writer and the author of 100 Things to Do in Annapolis and the Eastern Shore Before You Die. 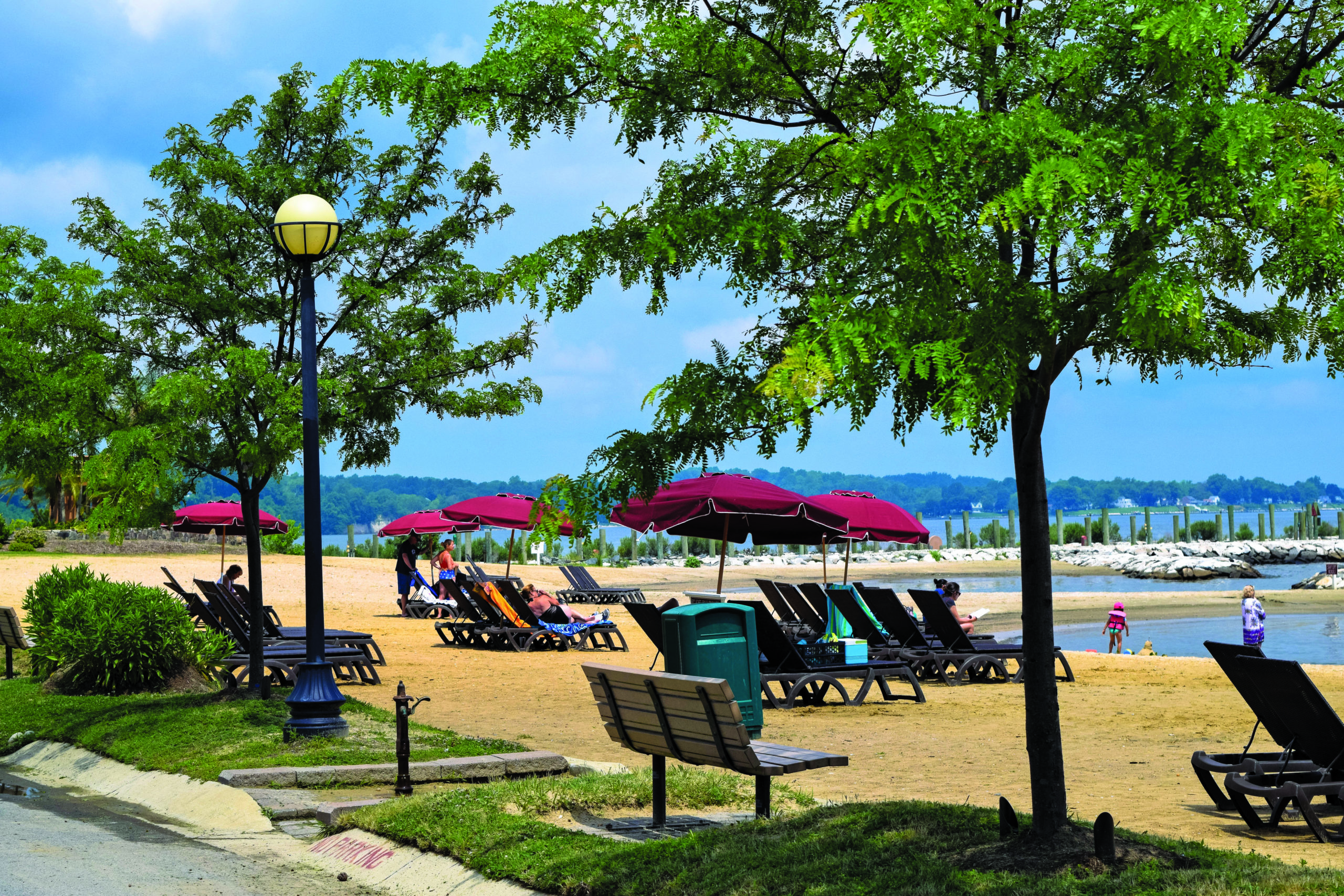 A Different Kind of Trail

If you what you crave is food for the soul, look to the Northern Neck Artisan Trail.