The seasonal churn of wind and water that fuels the Bay

For most of us, it’s easier to think about Bay ecology in terms of biology rather than physics. Plants, critters, and salinity are easier to get wrapped around than complicated mathematics describing fluid dynamics and the like. But basic physical oceanography can teach us a lot about how our Bay works, because those processes dictate much in the lives of those plants and critters.

Water temperature and wind are cases in point, especially this month. The water equation is not so hard to figure out. Essentially, as it cools it becomes denser and thus is more able to hold oxygen in solution. The wind effect is harder to quantify. In the 1970s, Bay researchers built a concrete scale model of the Bay the size of several football fields in a large steel building on Kent Island. It was poured to contours lofted from navigation charts by the Army Corps of Engineers, and it included all of the tidal rivers in remarkably accurate detail. It was fascinating to walk around the model and see the faithfully simulated 50-foot hole at Kingston Landing and the 55-foot hole at Leedstown on the Rappahannock or the 100-foot slot in the Chickahominy just above the mouth of Nettles Creek. However, the Bay research community abandoned the model because they couldn’t get it to accurately simulate the Chesapeake’s flows. Today, the building is gone, and the model was demolished to make way for an industrial park.

The problem was, the model couldn’t simulate the effects of wind very well. The Bay watershed flows for 500 miles from Otsego Lake in Cooperstown, New York, the source of the Susquehanna, to Virginia Beach, with the Chesapeake covering roughly 200 miles of that sweep. Now imagine you shrank that watershed down to the size of a football field. If you’re standing at Virginia Beach, the Bay is now a puddle in front of you, extending maybe forty yards north and seven yards across between Smith Point and Onancock. At the scale of that football field, the average depth in that Chesapeake puddle is the thickness of two dimes. 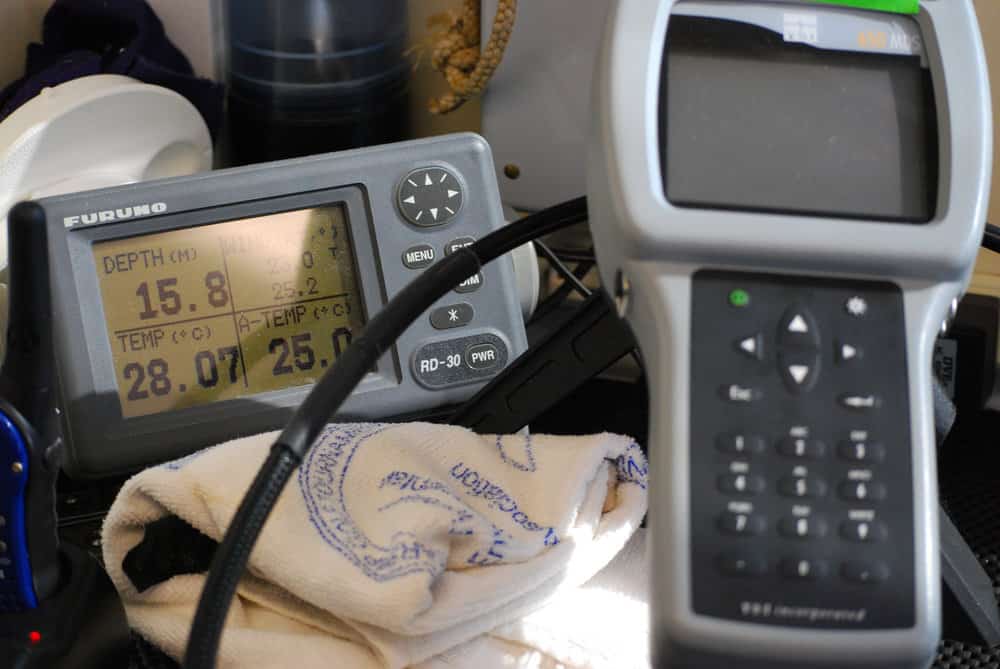 At Earth scale, our Bay is a very thin settling basin catching all the water flowing down its many rivers before sending it to the Atlantic. No wonder wind affects it so dynamically. Think about how a couple of days of strong northwest winds can “blow out all of the water,” especially if they come on the back edge of a weather front around the time of October’s full Hunter’s Moon. Strong winds push water around very effectively in the Chesapeake. Since the mid-1980s, the Chesapeake Bay Program has developed, and continues to refine, a computer-based model that integrates wind with the physical shape and weather patterns of the watershed. It is arguably the most sophisticated and useful ecosystem model in the world.

So, back to October on the Chesapeake. As the surface water cools, it becomes denser. Gradually, the upper layers will reach the density of the deeper layers and, as surface cooling progresses, they will begin to sink and mix with the bottom water, forcing some of it toward the surface. This turnover process is natural, and it occurs all over the Earth as the seasons change.

The other mechanism that drives turnover is, of course, the strong northwest winds that come with weather fronts in the fall. The big rivers of the Chesapeake’s western shore lie roughly northwest-southeast, so they are particularly susceptible to these winds, but they affect the Eastern Shore rivers too. That said, the timing of turnover varies from river to river from year to year. For the past four years, I have closely watched the Severn River above Annapolis by running weekly vertical water quality profiles from April to December at one-meter intervals on a 25-foot-deep reef as part of an oyster restoration project. The profiler has a 10-meter cable with a probe at the end that measures temperature, salinity, and dissolved oxygen. I’m able to collect backup wind strength and direction data from NOAA’s Annapolis Buoy within the agency’s Chesapeake Bay Interpretive Buoy System (www.buoybay.noaa.gov). This exercise has given me a fascinating look at how these physical processes affect the river’s water column as well as oyster and fish habitat on the reef.

Those data show warm-weather oxygen depletion off and on from mid-May into September. Periodic thunderstorms and winds mix the river even in summer, and the fish show the effect on my skiff’s depth-sounder. When it’s mixed, they go deeper to get into cooler water. When the weather stabilizes and heats up for a week or two, the river stratifies and they move up in the water column, squeezed between water that’s uncomfortably hot for them and water depleted of oxygen. Striped bass, for example, tend to avoid 80- to 85-degree water. This year’s  heavy rains and winds in late July mixed the river, but two weeks without rain early that month and a week-long dry spell in early August locked the stratification back in. If you’re running a boat with a recording depth sounder, watch where you see bait-balls and larger predator fish. If you see them uniformly suspended at, say, 10 to 15 feet in deeper water, they are avoiding the “bad water” below. That blank screen underneath is what a dead zone looks like.

Want to follow this remarkable process yourself? The Eyes on the Bay (eyesonthebay.dnr.maryland.gov/) program at the Maryland Department of Natural Resources is your best source. Even more, the Eyes on the Bay team created and maintains a unique Click Before You Cast page to help anglers plan successful trips depending on water conditions.

Physics matters on the Chesapeake. There’s a lot going on in our waters as the seasons change. It’s fascinating stuff, especially if you’re looking for fish or crabs.

November in this part of the Bay will turn anyone into an avid birdwatcher.