We’re scooting out of Grays Inn Creek toward a 24-foot barge off Eastern Neck Island in Scott Budden’s 21-foot Carolina Skiff. It’s mid-August, and the Chester River is like glass. Nonetheless, Budden, who owns Orchard Point Oyster Company, wears chest waders and a thick, long-sleeved shirt. “I get cut up by the shells if I don’t,” he explains.

Aboard the barge, Budden and Sean Corcoran will process eight cages of oysters they hauled out of Budden’s five-acre oyster farm earlier today. Budden starts a generator, and one-by-one, they heave the 150-pound cages onto the culling board and dump the sharp-edged contents. Corcoran scrubs the algae and growth off of the cages to improve water flow, while Budden inspects the shells, culling worms and small crabs, and he scoops the oysters into a tumbler where the shells are washed and the fine edges are chipped off by the tumbling. “Taking off that edge encourages them to put shell on to make a deeper cup and fatter oyster,” Budden explains.

Next, they load the oysters back into the cages, and with the help of a small hydraulic crane mounted in the skiff, the cages are levered off the barge, stacked in the skiff, ferried into position and lowered into the river. It’s heavy work. Cages full of market-ready oysters can weigh as much as 300 pounds. Budden puts in 12 to 14 hours most days. “We come out in everything, unless it’s a gale,” he says.

Budden grew up on the Chester and Sassafras rivers, and at thirty-two-years-old he could be working in an air-conditioned office earning an enviable salary with benefits as a financial analyst, something he did for eight years, the last six at Booz Allen Hamilton. But in 2015, he quit. “I wasn’t fulfilled,” he says. “Oyster farming made sense both personally and from a business perspective.” But stepping off the MBA trail was more than existential ache. He’d seen firsthand the deterioration of the rivers’ water quality and wanted to improve it. “It’s the biggest single personal thing I could do to help. And the market is good now!” he adds, grinning.

But it was hardly smooth sailing. His application for a lease on the Chester River, approved in 2014 by the Maryland Department of Natural Resources, provoked opposition, which delayed his first seeding [see “If at First You Don’t Succeed,” Talk of The Bay, July 2015]. A compromise enabled him to plant his first crop in 2015 on a temporary lease, but he had to move the operation, including markers, floats, lines, 100 cages and seven ground-screws planted five feet deep that he and a cousin had hand-turned into the riverbed, to another location and start over.

Oyster farming is more than just plonking oysters down and waiting for them to grow to harvest size. As with any animal husbandry endeavor, each stage is managed from the seed oysters, which must be washed every day or two, to seeding, to thinning out the oysters as they grow and crowd the cages. For a sense of scale, he recently planted 200,000 oysters, bringing the field to 1 million, which is slightly more than half of the 1.7 million he intends to plant. It’s all hands-on work.

Today’s three-inch oysters are ready for the market. Legally, he can sell farmed oysters at 2.5 inches, “which is what the restaurants like,” he says—a succulent half-shell bite rather than a mouth-filling glob.

Budden keeps an accountant’s track of the operation (orchardpointoysters.com)while working toward greater efficiencies. Now in his third growing season, the business’s trajectory is up. And he loves being on the water. “There are really good days out there and some really not great days,” he says “but most days I like it more than the office. And
the commute is nicer!” 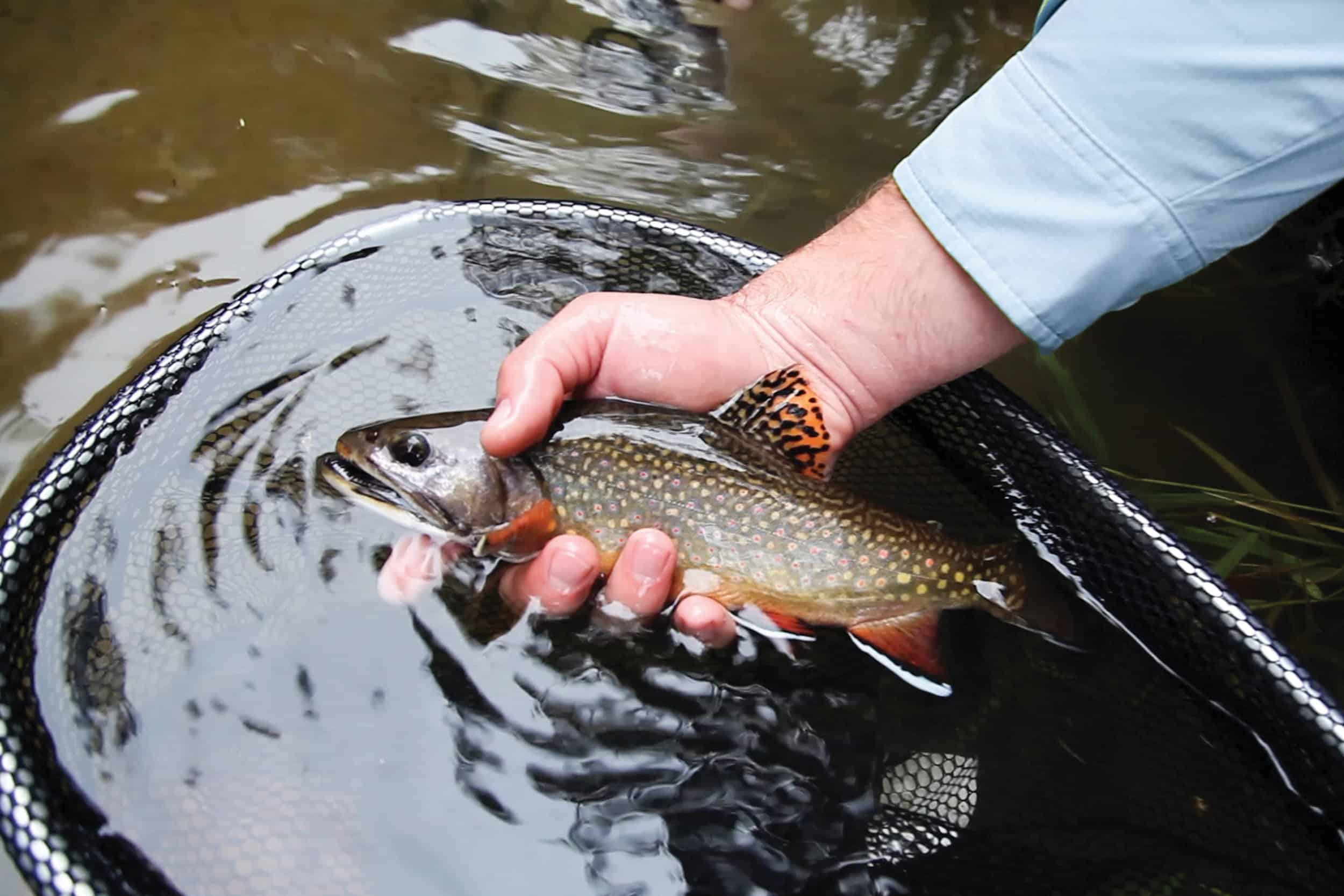 The watershed’s native trout are an early indicator of Bay health.