A pair of new documentaries breaks new ground on the lives of Maryland’s two most famous abolitionists, relying on experts right here on the Bay. And you can get a first look before they air on TV.

Harriet Tubman and Frederick Douglass are described as towering figures in the fight for self-liberation and the abolition of slavery.

“Both Frederick Douglass and Harriet Tubman had such wide-reaching and powerful voices,” says Jill Ferris, Senior Director of Engagement, Learning, & Interpretation of the Chesapeake Bay Maritime Museum in St. Michaels, “but this area fiercely claims an important connection to them both.”

Harriet Tubman: Visions of Freedom and Becoming Frederick Douglass are two new documentaries that go beyond the standard narrative to explore the parallels and differences between these two Americans who made such an impact on the nation’s history. Co-produced by Firelight Films and Maryland Public Television, the films are directed by Oscar nominee Stanley Nelson and Nicole London
and voiced by actors Alfre Woodard (record-holding Primetime Emmy winner) and Wendell Pierce (“The Wire”).

“Because Tubman and Douglass were almost complete opposites in the way they lived, we had to be creative in the way we approached the films,” London says. “As an example, Tubman had never been literate. Someone else wrote her memoirs and with that took a lot of dramatic license. And we only had seven images of her.”

To tell who Tubman was, filmmakers translated her vision through paintings and imagery creating a beautiful, layered view of time and place.

For Becoming Frederick Douglass, the opposite was true. Douglass, who escaped enslavement in 1838, taught himself to read and write. He became a powerful author and orator who mastered the art of controlling his narrative. Not only was he the most photographed man of his era, but the orator most heard by Americans, both Black and White.

“With Frederick Douglass, we could lean into the abundance of imagery and texts available,” says London.

More than 20 historians and experts served as consultants for both films. Among them were local scholars Adam Goodheart, Anthony Cohen, and Dale Green. Goodheart is the Hodson Trust-Griswold Director of the Starr Center for the Study of the American Experience at Washington College in Chestertown.

Cohen heads The Menare Foundation, an organization dedicated to the exploration and promotion of the history of the Underground Railroad.

“In 1996 I walked from Montgomery County to Canada along one of the routes discovered in my findings,” Cohen says. “I’ve been involved in the Harriet Tubman Byway, and the Harriet Tubman Underground Railroad National Historical Park in Dorchester County as a consultant since 2003.”

Dale Green is a professor at Morgan State University and descendant of Rev. Samuel Green, an Eastern Shore Underground Railroad conductor sentenced to 10 years in jail for possession of the book Uncle Tom’s Cabin.

At the Chesapeake Bay Maritime Museum in St. Michaels, Ferris says “we aim to build the programming to examine Tubman’s and Douglass’ international significance but also to bring them back home to the Chesapeake and the Eastern Shore.”

On Sept. 8, the museum hosted a pre-screening and panel discussion of Becoming Frederick Douglass, including members of The Frederick Douglass Honor Society, an organization located in nearby Easton and dedicated to developing programs that continue the Douglass legacy of human rights, education, personal growth, and involvement of citizens.

“The Honor Society is an incredible community resource to bring together so it was important to me that they were a partner in putting together the program,” said Ferris.

This Thursday, Sept. 22 from 5:30-7:30 p.m. the museum will host a screening and panel discussion of Harriet Tubman: Visions of Freedom. Historian Anthony Cohen and filmmakers George Burroughs and Lauren Giordano will explore how self-liberators used nature to forge a path to freedom.

“There are no two people more important to our country’s history than Frederick Douglass and Harriet Tubman. We are honored to share their stories with a country that continues to grapple with the impact of slavery and debate notions of citizenship, democracy, and freedom,” says Nelson. 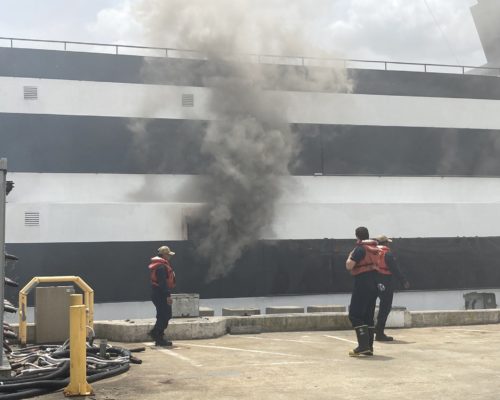 It was a scary situation, but responders were widely praised for coming together to get