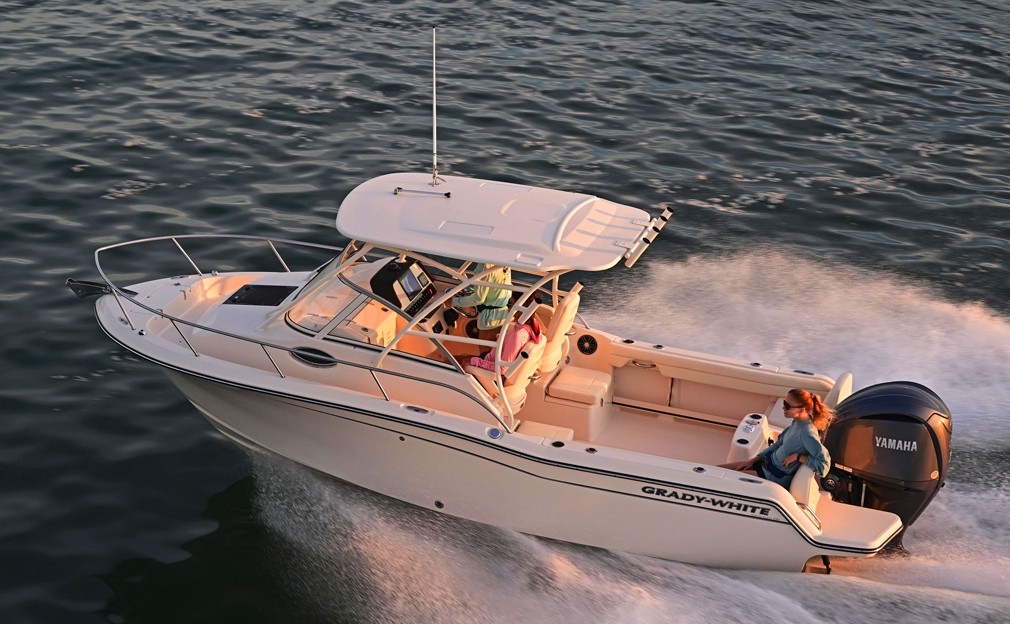 Greenville, NC— Grady-White Boats has reimagined a beloved classic. At the 1974 New York
Boat Show, Grady-White unveiled one of the first walkaround cabin boats – a concept that quickly
became a signature member of the company’s legendary lineup. Nearly half a century later, Grady-
White proudly introduces the Adventure 218, stepping into a new era for boating.

A 21-foot walkaround cabin boat, the Adventure 218 honors the heritage of the classic Grady-White
walkaround that defined a generation of boaters. Today, its unique, luxurious, and spacious layout, with sleek updates and added creature comforts, takes us in a new direction for both the young and young-atheart that are looking for adventure on the water. With a focus on maintaining the most beloved aspects of the walkaround concept, the Grady-White design team thoughtfully engineered the 218 to increase usable space and versatility, all while transitioning to sleeker lines and modernized detail in every area of the boat.

A widened beam, the largest of any 21-foot boat in its class today, accommodates a roomy cockpit complete with cushioned deluxe helm and companion chairs. With cushioned fish boxes behind the helm seats, and aft seats with Grady-White’s patented reversible self-stowing cushions with non-skid safety treads, the 218 allows multiple passengers to ride in comfort. The 218 also boasts an extended and modernized helm dashboard. The added area provides ample space for electronics and other features needed for both day and night travel.

The addition of two integrated platforms aft, along with easy access from Grady-White’s patented
pivoting seat backs, make fighting fish from the stern as effortless as along the walkaround sides and bow. For families that enjoy water sports, the platforms provide easy access to and from the water with Grady’s stainless steel four-step ladder off the starboard platform. The addition of an optional retractable ski pylon, a popular feature not offered on previous walkaround boats, makes setup a snap for wakeboarding, water skiing, and tubing.

The roomy cabin interior includes cozy cushions with spacious storage hatches below, as well as a
covered head to the starboard side. With enough space for overnighting, or for children to rest out of the elements during the day, the 218’s cabin tops off the updated creature comforts on this model. Two side windows and a forward hatch keep cabin air fresh, and indirect lighting on a remote switch illuminates the way after the sun sets. Above deck, you can watch the sun rise or shooting stars at night while resting comfortably on the optional foredeck cushions that cover the flush mounted hatch.

Other definitive Grady-White features in the 218’s design include well-placed, abundant storage space in the cockpit and cabin, as well as removable drop-in boxes below the aft seats that provide easy access to the bilge and batteries. Two insulated fish boxes, 120-quart at starboard and 126-quart at port, provide plenty of room for the day’s catch. With storage for 10 rods, six stainless pull-up cleats, and stainless overboard draining cup holders strategically placed throughout the boat, the 218 shines with Grady- White’s legendary attention to detail. Customers can suit any boating lifestyle with optional features such as a painted aluminum frame hardtop with four additional leg-mount rod holders, a 31-gallon livewell, a stainless anchor roller, and a 10-gallon freshwater shower.

“Grady-White has many loyal customers that already prize the functionality and versatility of our
walkaround cabin boats,” says Joey Weller, Vice President of Sales. “We’re excited to introduce this
new model that enhances both its usability and style. The increased size will offer those seeking a
walkaround cabin model more space, more amenities, and ultimately more enjoyment. New boaters
who haven’t tried a cabin boat, and Grady fans who already have, will both love this all-purpose new option!”

Grady-White is proud to introduce this next-generation boat with a perfect blend of vintage appeal and modern taste. Exploring, camping, fishing, cruising, or water sports – with the new Adventure 218, you can truly have it all.

Founded in 1959, Grady-White builds boats from 18 to 45 feet at its plant in Greenville, NC. The
company has been under private ownership by National Marine Manufacturers Association Hall of
Fame member Eddie Smith since 1968. In 1974, Grady-White pioneered one of the first walkaround
cabin boats, which became a catalyst for their early growth. Today, led by 45-year company veteran, President Kris Carroll, Grady-White produces 25 models in five different designs including coastal explorer, center console, dual console, walkaround cabin, and express cabin boats. The company has been awarded every third-party customer satisfaction award ever presented in the marine industry, including all 8 of the J.D. Power and Associates Customer Satisfaction Awards for their category and all 20 years of the NMMA Customer Satisfaction Index awards consecutively.