Virginia’s clam fishery is the largest in the nation. Why don’t we hear more about it?

Why is the “world your oyster” but people tell you to “clam up?”

There is a double standard at work in the world of bivalves that needs to end so we can begin to truly appreciate the culinary delights of one of the Chesapeake’s most succulent and versatile native species, the hard clam (Mercenaria mercenaria).

Oysters are delicious and oyster merchants have done a masterful job marketing their product. A mystique has been spun around the oyster that involves provenance, merroir, luxury, gastronomy, libido, and evocative names from Shooting Point Salts to Little Bitches. There is even a Virginia Oyster Trail (virginiaoystertrail.com).

No comparable attention has been paid to the clam. Clams are graded by size and sold in sacks. That’s it.

It’s high time the clam gets its due as a co-equal of the oyster—a top-quality food product with unique characteristics, outstanding culinary potential, and the ability to increase your IQ by up to 25 points! (I made that last part up, but I suspect the “oysters increase libido” thing is a marketing gimmick, too.)

There is a simple explanation why clams have not risen to the pinnacle of Chesapeake cuisine: The small, tender clams marketed today in grocery stores and available atop pasta at restaurants are a relatively new product that have not had centuries to become fully ingrained in our regional foodways.

For thousands of years, clams harvested in the Chesapeake and nearby seaside were predominantly full-sized chowder clams or slightly smaller cherrystones or top necks. These large clams were most easily gathered using the technology of the day: treading with feet, signing (looking for air holes in the sand) then digging with iron rakes, and later dredges.

Some smaller clams were caught and eaten, but the bulk of wild-caught clams brought to market were big, tough chowder clams (called quahogs in New England). These big clams are best for traditional (and delicious) recipes like chowder, fritters, and stuffed clams. Too tough to eat whole, they are chopped or minced before serving.

Much smaller and much more tender, the one-inch middlenecks or 7/8-inch littlenecks you see in mesh bags at the seafood counter can be eaten on the half-shell or cooked in myriad ways our grandparents would never have imagined. Virginia clam farmers even sell tiny 5/8-inch “pasta necks,” harvested specifically to be eaten on linguine.

The cultured clam industry in Virginia was an offshoot of the catastrophic oyster die-off of the 1980s caused by dermo disease and the MSX parasite. As oysters became exceedingly scarce, seafood companies like H.M. Terry Co. looked for an alternative product to market. “There was a seafood void that needed to be filled,” confides Terry.

In conjunction with the Virginia Institute of Marine Science, H.M. Terry Co. and a handful of others on Virginia’s Eastern Shore pioneered the growing of seed clams and the process of planting, protecting, and harvesting marketable clams in the crystal-clear waters of Hog Island Bay, which is designated a United Nations Biosphere Reserve.

The result is hundreds of millions of tender, young clams being sold annually by Virginia clam farmers. That enormous volume of tiny clams had never been seen before and literally spawned a new industry. In 2018, Virginia was the number-one U.S. state in hard clam production, generating a value of nearly $39 million compared to just $14.5 million for Virginia oysters. Over half a billion clams were planted in Virginia waters in 2018.

Clams are also nutritional powerhouses. A three-ounce serving of clams contains just 126 calories and 2 grams of fat, but 132% of your recommended daily intake of iron, an astronomical 1,401% of your daily required B12, and 78% of your needed daily selenium. (Selenium may help prevent Alzheimer’s disease, heart disease, and certain types of cancer.)

“We ask ourselves, who is eating all of these clams,” says Heather Lusk, fourth-generation shellfish grower. “On a big day we might be selling 400,000 clams. If so many people are eating them, why don’t they talk about clams like they do oysters? Why are they not getting any love?”

There is evidence that clams may even have the potential for merroir, a taste of the waters in which they were grown that is so valued by oyster aficionados. Virginia Sea Grant graduate research fellow Ann Ropp has identified six distinct genetic populations of hard clams on the Eastern seaboard with differences in salt tolerance, growth rates, and shell strength. Why not taste and texture? Maybe a clam can be bred to taste like garlic butter!

To enjoy clams, there are few places in the Chesapeake region better than The Great Machipongo Clam Shack in Nassawaddox, Va. The Great Machipongo Clam Shack has been serving up local hard clams in many delicious ways for over 25 years and is a treasured stopping point for locals as well as travelers from Delaware, New Jersey, and New York heading up and down the East Coast to the Outer Banks. Local clams are available steamed and in homemade creamy chowder. The Clam Shack is also the place to pick up bags of live clams to go for an easy, beachy dinner on your first night at Duck or Corolla.

“The whole northern section of the East Coast has their clam shacks and they fry their clams,” says Clam Shack co-owner Jean Mariner. “We would get complaints ‘there are no fried clams.’ But these are not the same clams. We had to educate people about our clams,” she says. “Littlenecks—you just pop them in butter. So wonderful, just like popcorn!”

What to drink with clams? Beer may leap to mind, but if we are going to elevate the eating of clams to a fine art, I propose we pop a cork and pair our local clams with outstanding local wines. Mills Wehner at Chatham Vineyards in Machipongo suggests a glass of award-winning Church Creek Steel Fermented Chardonnay with raw, steamed, or fried clams; Oak Chardonnay with chowders and clam dishes involving a rich creamy sauce; and their Church Creek Vintners Blend with clam dishes featuring red sauce.

Hard clams are a Chesapeake treasure—delicious, sustainably harvested, versatile in the kitchen, and good for you. Let’s give the hard clam a fresh look, eat them in abundance, and put them in a place of honor in our Chesapeake cuisine.

Robert “Gus” Gustafson lives on the Eastern Shore of Virginia by way of Chicago, Harvard University, and a career on Capitol Hill. In his spare time, he coaches the Broadwater track and field teams and cultivates heirloom vegetables and fruits from the Chesapeake region. 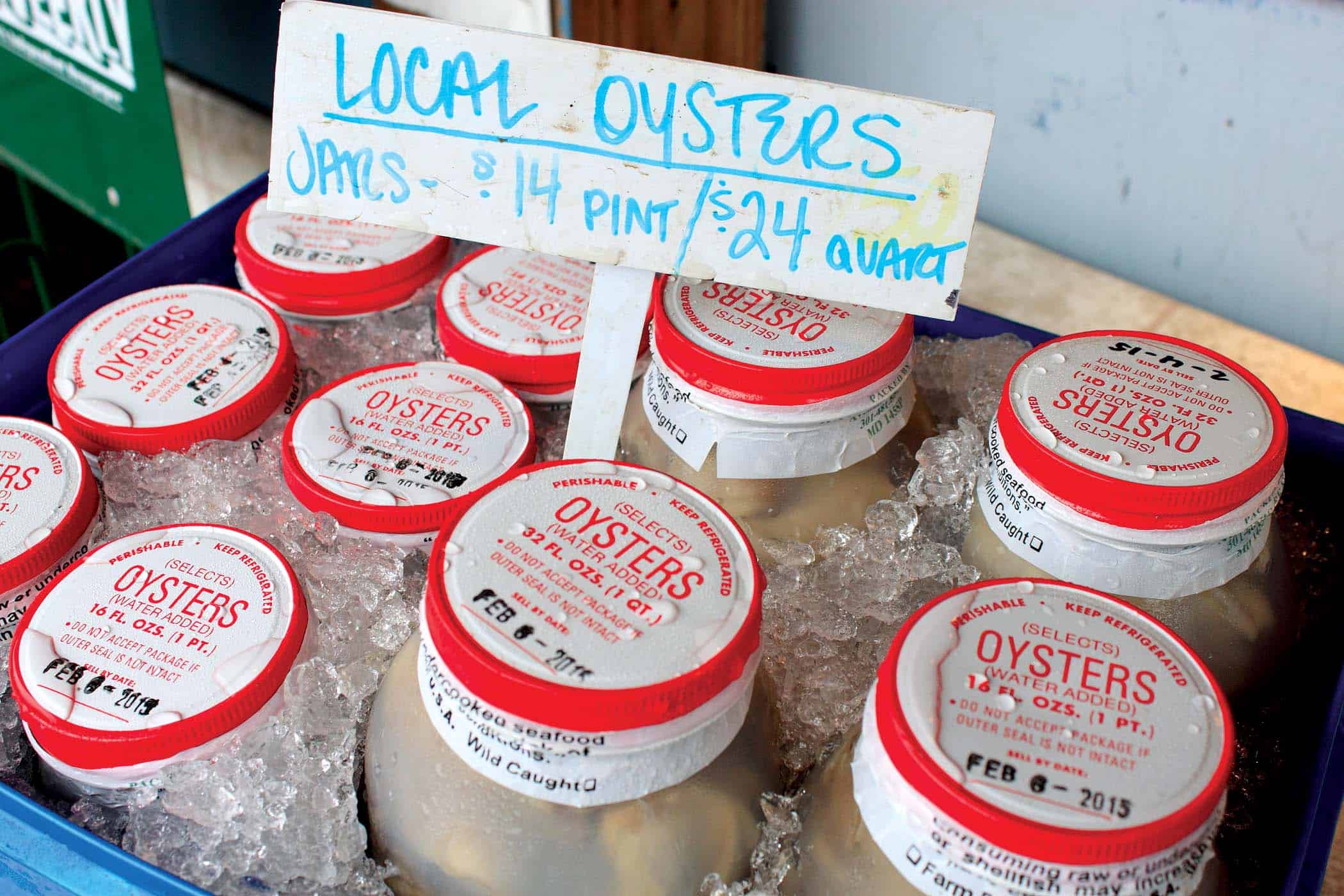 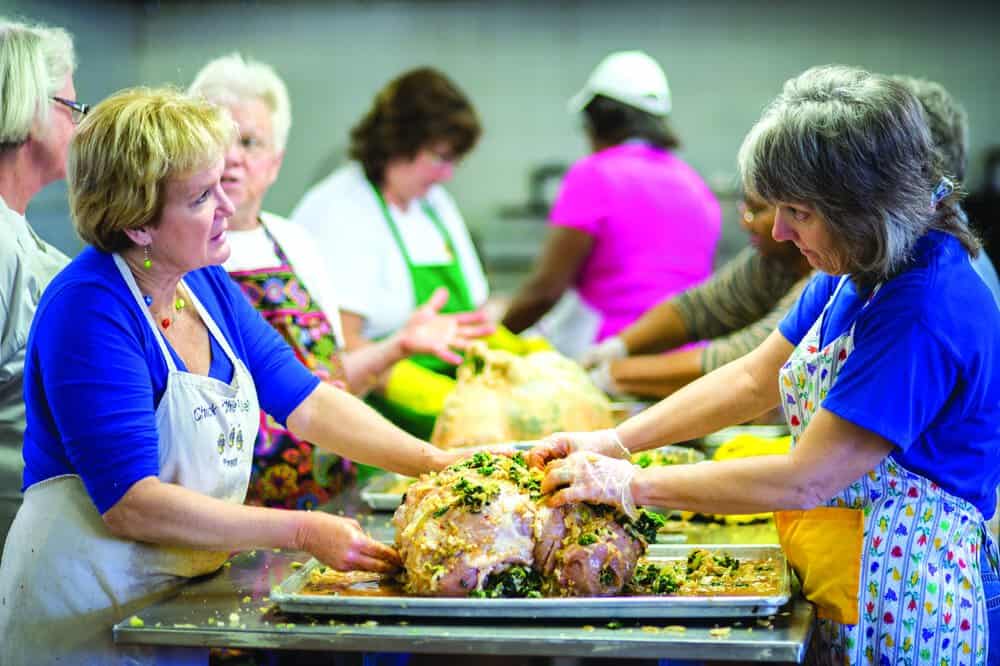