The long, contentious tug-of-war over the future of Maryland’s oysters is playing out on two fronts these days.

The state Department of Natural Resources is taking public comments on a new plan for managing the state’s oyster population, but lawmakers in Annapolis are weighing legislation that could foreclose some options in the plan — and possibly even require the department to take a whole new approach to drawing it up.

The DNR issued a press release Tuesday announcing that it had drafted an oyster management plan and would take public comments on it through March 19. It has been posted on the DNR website since Feb. 19, with the department allotting 30 days for the public to review and submit comments. The DNR’s announcement said that it hoped to finalize the plan in late spring.

The 86-page document is intended to serve as a blueprint for the state’s efforts to maintain a sustainable wild fishery and promote aquaculture, while also seeking to restore the Chesapeake Bay’s depleted oyster population for its overall ecological value.

“The work leading to this initial draft has been developed in consultation with scientists, academics and a variety of stakeholders, including the environmental community and commercial watermen,” Acting DNR Secretary Jeannie Haddaway-Riccio said in the press release. “We welcome input from the public as we work through the process of finalizing the plan.”

The draft plan is the first update to the state’s oyster policies since 2010. That’s when the DNR greatly expanded its network of oyster sanctuaries — a move that has drawn fire from watermen upset about being barred from harvesting in them.

In early 2017, with watermen saying they needed new reefs to work as their catch declined, the DNR floated a plan to reopen some of the sanctuaries and allow “rotational harvest” in them. That technique, practiced in Virginia for more than a decade, only permits harvesting on reefs on a staggered basis every two or three years, so the oysters can have time to replenish their population through reproduction.

But at the urging of environmentalists, the General Assembly blocked the DNR move. Lawmakers decreed then that no sanctuary boundaries could be changed until the DNR produced a new oyster management plan, one that relied on a scientific assessment of the bivalves’ abundance and the sustainability of the commercial wild harvest.

That assessment, produced in collaboration with the University of Maryland Center for Environmental Science, was completed late last year. It found that the stock of market-size oysters had decreased by half since 1999 and that overharvesting was occurring in a little more than half the public fishery areas.

The draft plan incorporates the results of that stock assessment, according to the DNR.  It calls for using the harvest targets and thresholds identified in that study to set limits on the fishery.

The plan doesn’t specify those limits, but instead lists about 20 different management options, including harvest caps, season or size limits, and more. Besides proposing rotational harvests, it also suggests “stock enhancement” to maintain or boost the harvest, by shifting juvenile seed oysters around the Bay and planting hatchery-reared baby oysters in other depleted areas.

Given the ongoing debate between environmentalists and watermen over oysters, initial reactions to the draft plan are mixed.

Jim Mullin, executive director of the Maryland Oystermen Association, called it “a good start” and said he had no major concerns with it.

“It’s going to obviously need some tweaking to work over time.  But at least we have something we can work with, something on paper,” he said. He particularly liked the plan’s proposal for rotational harvest.

“Virginia’s had such success with that,” he said, “and we’d like to try it here.”

Others had issues about what the report says and doesn’t say.

Allison Colden, Maryland fisheries scientist with the Chesapeake Bay Foundation, said she saw “very little new” in the draft plan as to how the DNR would manage the commercial fishery. For instance, she said, the DNR already has the authority to establish “harvest reserve areas,” which can be opened and closed periodically in a way that’s very similar to a rotational harvest.  The only difference, she said, is that the DNR is now proposing to do that by reopening some sanctuaries now closed to harvest.

Colden also said she was disappointed that the plan didn’t speak more plainly about ending the overfishing that was found through the stock assessment.

David Sikorski, executive director of the Coastal Conservation Association Maryland, said the plan contained “a lot of good information,” but didn’t do enough to spell out what steps the DNR would take to end overfishing.

A similar debate has been playing out in legislative hearing rooms this winter, as lawmakers mull a number of oyster bills that would affect the DNR’s management plan. One (HB298/SB448) would fix in law as sanctuaries the five Bay tributaries targeted for large-scale restoration efforts, so that only the General Assembly could open them for harvest.

At a hearing Friday, the DNR’s acting secretary noted that while restoration work is either finished or under way in three of the state’s targeted tributaries, officials are still working out plans for the other two in the St. Mary’s and Manokin rivers. Haddaway-Riccio urged lawmakers to allow her department discretion on setting the boundaries for those.

Another bill (HB720/SB830) would require the DNR to convene a group of stakeholders, including watermen, conservationists and oyster farmers, to develop a set of recommendations for future Baywide management of the shellfish. The bill is inspired by OysterFutures, a similar exercise led by UMCES that forged agreement on how to manage oysters in the Choptank and Little Choptank rivers on the Eastern Shore.

Watermen and environmentalists both endorsed the OysterFutures process and outcome as a potential remedy to the seemingly endless back-and-forth debates, and most have offered guarded support to the intent of the bill. But the bill would continue the prohibition on altering the state’s sanctuaries until the stakeholder group produces recommendations.

Haddaway-Riccio warned that, if not amended, the bill could stall work on either restoration projects or making harvests more sustainable. The CBF’s Colden, whose group backs the bill, said that it would just prevent chang es to sanctuaries until an agreement is reached on future management, and that it wouldn’t prevent the DNR from taking steps to limit harvesting and continue restoration.

Some watermen have bitterly denounced the oyster legislation backed by the CBF and other environmentalists, saying it breaks faith with the consensus reached by the OysterFutures group. That group, which included Colden and Sikorski, called for allowing the hand-tonging of oysters in some parts of the Little Choptank River that are now off limits in a sanctuary.

But Colden countered that the DNR management plan “cherry-picks” some of the OysterFutures recommendations most favored by watermen while ignoring or glossing over others, such as instituting stronger enforcement efforts to prevent poaching. She said that she’d agreed to opening that sanctuary as long as it was combined with other conservation measures, including the completion of the large-scale restoration originally planned in the Little Choptank. She also noted that the OysterFutures effort only applied to a portion of the Bay, while the DNR plan would cover all of the state’s waters.

Even as lawmakers are being pushed and pulled over oyster legislation, Haddaway-Riccio told them her department is forging ahead with its draft plan.

“I have a feeling we’re going to get plenty of public comment,” she said.

In the next 80 years, winter on the Chesapeake Bay could be half as long 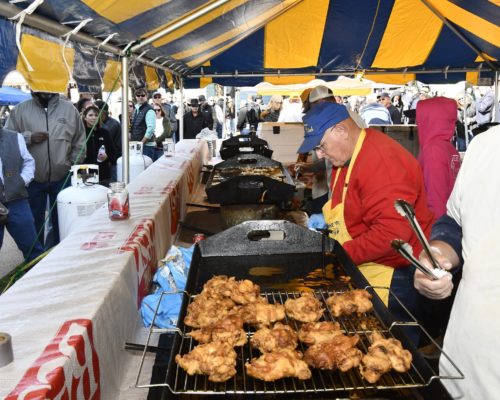 If you’re planning one of the town’s biggest events of the year, you hope and