Hooray for summer! Time for paddling, sailing, crabbing, fishing, tow-sports, and swimming. But the strong sun brings cautions too, and not just to our UV-ray-sensitive skins. July heat causes ecological stress in the Chesapeake and its rivers, and in this otherwise happy season, we do well to take some extra precautions with our waters and their critters, as well as ourselves.

Ever notice how brown the water gets this month? Here’s why: strong summer sunlight drives high levels of photosynthesis, the process by which plants absorb solar energy and convert it into sugars that fuel metabolism and create body tissue. In Chesapeake waters, the primary recipients of these rays are algae, microscopic single-cell plants, which grow in staggeringly large concentrations from hundreds to millions and even billions of cells per liter of water. We refer to a heavy growth of algae as a bloom, and the total collection of algae cells drifting in the water as phytoplankton, which produce more than half of the oxygen in our atmosphere.

Some phytoplankton blooms appear green, but many in the summer Chesapeake are brown algae, called dinoflagellates, which typically live for three days, die, and sink to the bottom in huge numbers. We call the largest of these blooms mahogany tides. Because of the Chesapeake’s dissolved nitrogen and phosphorus pollution (essentially fertilizer from many human sources—too much of a good thing), they have become standard features this month in most of our waters, and they cause a variety of ecosystem disruptions.

The major problem from blooms is turbidity, which is increased cloudiness that steals light from underwater Bay grasses growing in shallow waters. From the eelgrass and widgeon grass in salty Mobjack Bay and Tangier Sound, through the sago pondweed and redhead grass at mid-salinities, to the wild celery on the Susquehanna Flats, these grasses play key roles in the Chesapeake, but they are complex flowering plants that require many times more ambient light than algae cells, which can quickly grow to shade them out.

The warmer the water, the less oxygen it can hold in solution. Thus, summer water temperatures in the mid- to upper 80s become crunch time. For one thing, algae blooms cause dissolved oxygen levels to rise and fall in a rapidly repeating cycle. During daylight, photosynthesis from an algae bloom drives dissolved oxygen levels very high. At night, the algae don’t produce oxygen, but they use it just the way fish and crabs do. In their astronomical numbers, they can pull the oxygen down to dangerous levels just before dawn, when they begin photosynthesizing again. Thus, the critters living in the water get whipsawed between very high and very low levels over a 24-hour period. This phenomenon can be particularly lethal to young fish and crabs living in headwater creeks and coves.

Meanwhile, this warm water accelerates the metabolisms, and thus oxygen needs of cold-blooded critters that can’t regulate their body temperatures. For blue crabs sloughing their shells this month and in August, the squeeze between high metabolism and low oxygen is especially stressful as this demanding growth process drives their oxygen needs way up. Soft crabbers in the heat of summer spend a lot of time making sure the water in their floats gets adequately aerated for the peelers inside to survive shedding their shells. The combination of high metabolism and low oxygen also hits hard for the fish we catch but don’t intend to keep. The stress of fighting a rod and line in such water makes them particularly vulnerable to dying after being released, unless we take special care to handle them gently and carefully. Lifting a fish from 85-degree water into 95-degree air, even for a minute, can kill it, no matter how gentle the handling.

Throughout the Chesapeake system, the most serious hot weather issue is the way the water column stratifies. It’s a natural process. The warmer the water, the less its density. Also, the fresher, the less its density. Sunlight and rain ensure that the upper layers are less dense than the deeper layers. Hot, stable weather brings stratification, in which the warmer, fresher upper layer closes off the cooler, saltier lower layer. This “lid” prevents oxygen from diffusing into the deeper water, while dying algae cells from exhausted blooms sink all the way to the bottom. There, aerobic (oxygen-using) bacteria decay the biomass of dead algae, which measures in tons. Give that process a couple of weeks at July or August temperatures and the deep layer’s dissolved oxygen will drop to hypoxic (less than two milligrams per liter) and even anoxic (less than 0.5 milligrams per liter) levels. By contrast, rockfish need at least five milligrams per liter for normal growth and reproduction, and anything less than three can be lethal.

We refer to these oxygen-starved layers as “dead zones,” and they are easy to see on an electronic fishfinder screen where all the fish, both bait and predators, will be suspended above the “bad water.” Those fish get squeezed into the coolest water that offers adequate oxygen. One problem with the squeeze is that it concentrates them, often in stressful conditions of marginal temperature and oxygen, where pathogens can spread to infect large numbers of them. Warm water also grows pathogens that can infect humans. Vibrio and Mycobacteriosis, also known as “fish handler’s disease,” are the two most common on the Chesapeake. Both require immediate medical attention.

Fortunately, this bad news is countered by recent good news. Although far from complete, our efforts to clean up the Chesapeake’s waterways are bringing significant, scientifically verifiable progress. Dead zones are shrinking and even disappearing in some cases, while underwater Bay grass meadows are spreading. We anglers are gradually learning how to catch and release fish more carefully, and we’re paying more attention to waterborne diseases. We still have a lot of cleanup work to do, but the progress is encouraging. If we realize that summer on the Bay requires more than sunblock, and if we keep our restoration efforts going, we might find the wisdom to deal with the consequences of hot water and enjoy a grand future of summers on the water.

John Page Williams is a licensed captain and Maryland fishing guide. He has been on staff at the Chesapeake Bay Foundation as an educator, writer and senior naturalist, saving the Bay since 1973. In 2013, the State of Maryland proclaimed him an official Admiral of the Bay, something we knew all along. 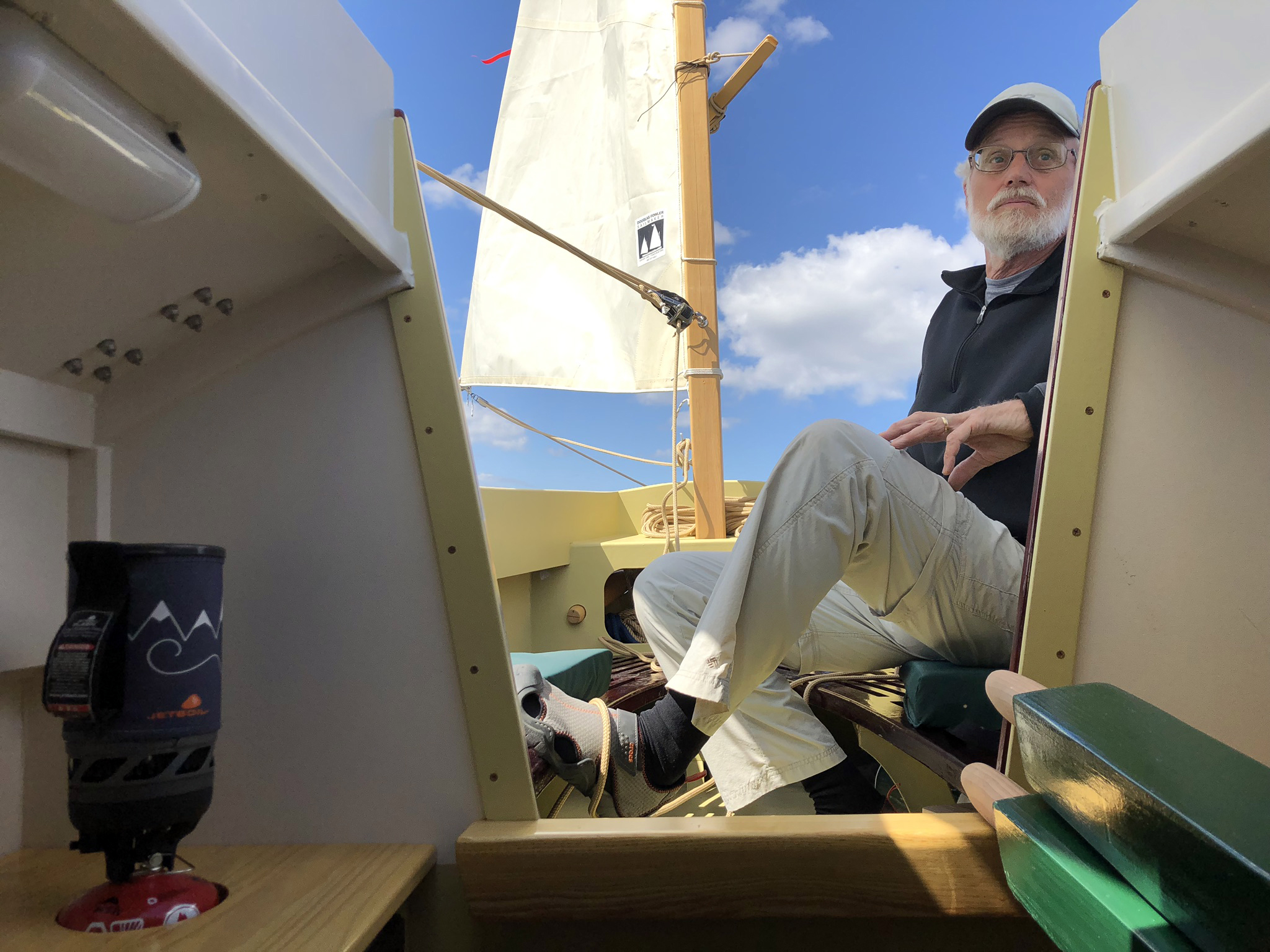 In Praise of Small Things