On the trail of oddball Chesapeake sport fish.

T .S. Eliot didn’t have the current pandemic in mind when he penned the  words, “April is the cruelest month…” But so was May and June, and man,  it remains an appropriate sentiment for the times. Almost no one has been spared some degree of pain and hardship. Those of us who make a living taking people fishing are trying to figure out what this will look like when some sense of  normalcy returns. Also, and unrelated to the pandemic, tighter restrictions have fallen on some popular game fish, most notably stripers and bluefish. This has me thinking about getting off the beaten path to chase fish that aren’t normally top of mind.  Here are a couple of them:

Some time ago, we were out in my Jones Brothers skiff prowling along the Poquoson Flats, one the Chesapeake Bay’s major underwater grass beds located on the south side of Virginia’s York River. I cut the engine and let the boat drift silently past the meadows of eel grass. Three fishermen from three generations were aboard, and we marveled at a pod of bottlenose dolphins that frolicked along the deep edge of the flats. My enthusiasm was tempered by the suspicion that this meant the houndfish we were searching for would be laying low to avoid becoming dolphin dinner.

Houndfish have been an obsession for me for more than 20 years, and for that, I have to thank or blame Dean Bieri, my occasional Virginia angling and beer-drinking co-conspirator. He and other locals call them “Poquoson marlin” due to the fish’s propensity for launching their slender bodies skyward like the pelagic billfish found off of our Atlantic Coast.

“We discovered these fish while crossing the [Poquoson] Flats after a failed cobia trip in the mid-1980s.” Bieri recalls. “Their aggressive strikes and grey-hounding runs quickly turned them from a save-the-day species to a fish I love to target. They have a colorful and exotic appearance, almost gator-like. They have been a treat for my experienced angling buds as well as novices. I understand they pickle and eat them in Louisiana, but their green and odd-smelling flesh maintains their sport-fish-only status in my book.”

Between late May and early August around the lower Chesapeake and Atlantic Coast, houndfish rarely disappoint as they recklessly chase metal lures. They seem to hang out in small packs and take turns attacking baitfish and fake baitfish lures. They close ground with lightening speed, and once in range, they use their narrow beaks to thrash at the lure, often times sending it sailing out of  the water.

It isn’t easy to hook them. It depends on the angler’s skill, and the usual scenario is something like this—dozens of strikes with about a 30-percent hook-up rate and lots of blow-ups and laughs. Landing success is typically a fraction of that. Patience pays off in bringing one of these critters alongside to be quickly admired and carefully released.

Before you start casting, approach the flats very slowly, and look for swirls among the bare patches in the grass beds. These voracious aquatic wolves prefer spoons dressed with white, yellow, or chartreuse bucktail fibers with plenty of flash tied in. Hopkins spoons and Shorties, Specialized Baits Li’l Bunkers, and the new Rain Minnow from G-Eye Jigs work well. My preferred weights range from half-ounce to one ounce. I also like slow-sinking or topwater swimming lures such as the Yo Zuri Crystal Minnow, the Super Spook, Jr., or Rapala’s Saltwater X-Rap.

One technique that has worked for me is the old “pop n’ swap” whereby you cast a hookless topwater plug as far as you can and rip it back in as fast as you can. A second angler casts out a shiny metal spoon and reels it back hot on the trail of the plug. Occasionally pause the spoon for a moment to allow a possible hound to catch up. The fish might initially hit the offering like a Mack truck, but usually it’s the second strike from that fish or one of its pack mates that results in a solid hookup. Any bit of slack in the line will guarantee a lost fish, however.

Houndfish are about as docile as fifth graders on Skittles, so beware of their leaping ability, strength, and teeth. On one memorable trip, a rambunctious houndfish tried to exact revenge by rocketing out of the water, heading directly toward me with teeth bared. You bet your bottom dollar I flinched! Rows of razor-like cutters tearing toward your face will have that effect. Injury and even (very rarely) death has been caused by a houndfish, and more frequently by their close cousin, the needlefish. This usually happens at night when, attracted by artificial lights, they leap over small boats and impale an unsuspecting angler. Ouch.

I strongly advise against pulling a houndfish over the gunwales without gloves and a fish gripper. They are stronger than you think, despite  their skinny bodies. Nets aren’t that effective in my experience because the fish thrashes and the lure gets tangled in the net. It’s best to let the fish calm down in the water, then use extra-long, needle-nose pliers to extract the hook.

If you’re wondering if houndfish are good table fare, consider that  Vic Dunaway wrote in his landmark Sport Fish of the Atlantic that they  are “quite good, surprisingly.” I’m  told by reputable angler/cooks that houndfish is pretty good smoked  or pickled. I’ll take their word since I have not eaten one, nor do I  intend to. Either way, come summer, I’ll return to the Poquoson  Flats to subject myself to more  rude behavior.

Another visitor that doesn’t show up on many Chesapeake and mid-Atlantic anglers’ wish-lists is the Florida pompano, a tasty little fish that swims our way in late summer. Perhaps they should be, since they’re showing up more frequently in our waters. According to Scott Lenox, host of the popular online Fish in OC report, 2019 was a banner pompano year. “Last summer, we saw a bunch of them, much more so than in previous summers,” Lenox said. “Mostly surf and back-bay fishermen caught them while fishing for croaker or whiting.” According to Maryland Department of Natural Resources biologists, pompano are swimming further north into the Chesapeake Bay as well, and they expect more will come.

Fourteen-year-old Scott Hartzell Jr. of Easton recently gained pompano experience with a 3.375-pounder he caught to become Maryland’s first official state record holder for that species. His fish hit a gold Clarkspoon while he was fishing with family and friends over the Stone Rock off of Tilghman Island. “We’ve caught crazy fish before, but never this,” said Scott Hartzell Sr..

Pompano are good fighters on light tackle, peeling line in a way that belies their small size. (Most are under a pound.) Better yet, you don’t need a fancy center console boat or expensive gear to reach them. Bottom fishing from the surf, off of piers, or along inlets is the most popular method.

Silver bodied with olive green backs and bright yellow coloring along their undersides and lower fins, they’ll eat shrimp, clam, crab, or squid cut into small pieces. Experienced surf anglers say mole crabs, which you can dig out of sandy Atlantic beaches, are the best pompano bait. Small Kahle or circle hooks work well for most situations, whereas long shank hooks rigged with floats that keep the bait off the bottom are preferred by surf anglers. When the ocean is calm and pompano bunch up, you can use small jigs dressed with brightly colored hair rigged in tandem. Tip them with small chunks of shrimp and work them along the bottom.

These are just a couple of out-of-the-ordinary fish to fulfill an angling bucket list. Give them a try and you might experience a renewed passion for the chase.

by Chris D. Dollar Waterfowl conservation versus waterfowl harvest—I’m the first to admit that I 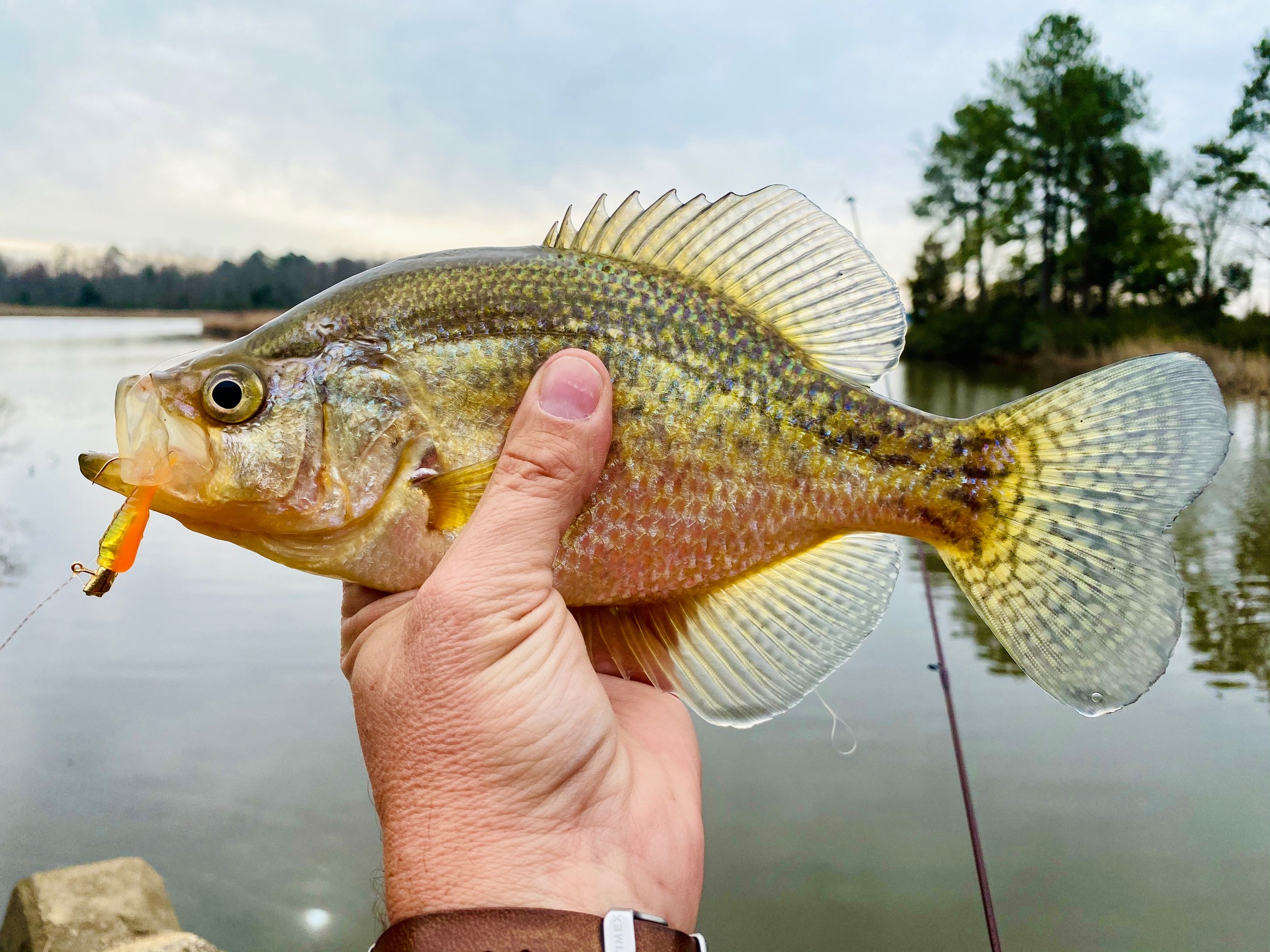 Spring is coming, and so are the panfish

Full-bodied and robust, a gorgeous yellow perch, better than 10 inches, burst from the ice-cold