The remembrance of things past is a boater’s antidote to the long, cold wait for spring.

As I write this, winter is still dragging its mud-caked feet toward spring, with launch season still a few months away. But not in my head. There, inside my cheery cerebellum, the sun is warm, the breeze is constant, and the seas are always less than a foot. Today in my brain I am heading out Back Creek for the Bay. Should I go north or south this time? Rock Hall or Deltaville? Fairlee Creek or Mobjack Bay? And just like that, I’m off. But then, more often than not, my new adventure reminds me of a former adventure and before you can yell, “Hard alee!,” I’m deep into reliving a time when the breeze was not always constant and the seas were definitely more than a foot. But then, nearly all boating memories are fond ones, and even the worst adventures have taken on a burnished glow. I have two particular adventures that have been popping up in my head like meerkats all winter.

The first one took place years ago. It was my first solo sail in Snipp, my little Albin Vega 27, a boat I remember with outsized affection. She was housed at a small marina up the South Branch of the Yeocomico River, near the mouth of the Potomac, and she needed a bit of work, as we say euphemistically. But finally, on a bright spring day, I got up the nerve to take her out by myself. I started the motor and cast off the lines in the usual way, and ship’s dog Skippy and I set off. As I unspool the day in my mind, I find as much pleasure in all its little details as the adventure itself, depending how much time I have to waste. Here is Mundy Point, I say to myself, and there is Tom Jones Point. Remember to go wide at red “2”.

Reaching the long straightaway to the entrance marker, known locally as Birthday Cake (named for the original marker, which I imagine must have looked like something from The Great British Baking Show, because the current one certainly doesn’t), I turn into the wind and put the engine at slow idle. Then I hop quickly up on deck to haul up the main and then pull up the hanked-on jib. Time to leap back into the cockpit to grab the tiller and praise Skippy for staying put. I haul in on the flapping main just until it begins to fill and pull us off the wind. I feel the sail catch its first bite of wind, as the balance of power shifts to the boat. Now I trim both main and jib, pushing the tiller over to put us back on course for the Birthday Cake. Finally, I cut the engine. Sailing! Glorious! But wait, no time for bliss because there is still the business of getting out into the Potomac. And this requires a couple of short tacks. But at last it is done, and we come out past the lee of Sandy Point. Here, the wind finds us and sets us heeling as the water begins to foam merrily down Snipp’s lee side, and we race toward the Maryland shore and the wide entrance to the St. Marys River, five miles away. I ease the sails slightly to spill a little wind and relax a bit.

I decide to try to balance the sails and helm to let her go on her own. After some fooling around, and to my immense pleasure, I actually do. I sit tight for another few minutes, holding my breath like a nervous aunt, and then I do it. Moving practically on tiptoe, I climb gingerly up on deck on the windward side and grab the side stay. And there I am, standing on the deck of my little boat as she pelts across the Potomac under her own steam. I feel the wind and the sun on my face. I look across the river and then back to the cockpit with its empty helm and slightly anxious dog, and I am suddenly filled with joy, absolute and pure. I nearly explode with it. I know in some part of me that I will probably never feel quite this way again. But I’m satisfied because I also know that to feel it once is enough. I’ll always have the memory of it. And it’s that memory, and the thought of adventures yet to come, that warm me on the coldest, darkest winter day and keep me company.

The second memory revisits me like Marley’s ghost. It begins one day this past June when the ship’s fur-bearing crew, Sammy and Bindi, and I were on the home stretch of a trip back to the Chesapeake. We transit North Carolina’s Alligator-Pungo Canal—a lonely and desolate place that seems perpetually on the verge of turning into a Stephen King movie—and then the Alligator River. For the last half-hour before we reach the Alligator River swing bridge, I’ve been watching thunderstorms build over the flat, pine-spikey marshland to the west. Now, directly after we’ve come through the bridge, one of them gets close enough that it seems prudent to pull off the channel and anchor. We wait. Nothing happens as the storm veers south.

It’s 2:30 p.m. now, with severe storms predicted by NOAA radio for the rest of the afternoon. And we’re sitting near the entrance to Albemarle Sound, an infamous body of shallow water that can be whipped up to legendary fury at the slightest provocation. The next day’s winds are forecast at 15 to 20, with gusts to 25 from the northwest. That’s not just a provocation, that’s a declaration of war. I dither. Maybe the wind won’t materialize tomorrow. That happens a lot. On the other hand, maybe it will and maybe it won’t leave for two or three days. On the other other hand, maybe I can make it across now before any more severe storms show up. I decide to chance it. I really want to get to the other side of the Albemarle. The radar is clear for the moment and the sun is out. I take a deep breath and pull the anchor. Bindi and Sammy settle back into their cruising spots, and we zig-zag through the markers and out onto the Albemarle. If we get caught in a squall out here, I am thinking, we’re going to be in a heap of trouble! Even in re-living the memory, I am nervous all over again.

It takes Moment of Zen, under power, about two and a half hours to cross the 15 miles of Albemarle Sound from the Little Alligator River to the North River on the other side. We could aim for the Pasquotank River route through the Dismal Swamp instead—it’s about the same distance—but unlike the North River, there’s nowhere to hide once you get there. And that hiding place is just what I’m counting on. Inside its entrance, the North River bellies out behind Camden Point to the west, with depths of eight and nine feet nearly to the shore. It doesn’t look like it on the charts, but I know from experience that this strip makes a wizard anchorage in anything from south to northwest winds, depending how far you go west off the channel. All I need is two and a half squall-free hours to get there.

For the next two hours, I divide my time between scanning the horizon and trying to raise a signal on my cell phone to check my radar app. The crossing takes forever! I spot a few storms now and then in the distance, but nothing headed our way. Then about a mile from North River, I get my cell coverage back and look at the radar. Holy cow! The radar shows a storm the size of Nebraska headed directly our way. A few minutes later, the wind picks up behind us, rushing toward the squall. I begin making little hurry-up noises to myself. Just as the wind clocks west, we reach the entrance channel. Now we have five closely spaced markers to negotiate before we can cut west behind the point. Finally, we come through the last of them and I make the turn. Two miles later, we are finally far enough in that the land begins to block most of the chop and at least some of the wind. Now I can let the anchor go. I force myself to let the chain out slowly … slowly, to make sure it’s well set. I get out 80 feet on my Rocna, check the set, and go forward to tie it off. I’m on my way back to the cockpit when the storm finds us. In spades. For the next 20 minutes the wind howls like a banshee. Then comes the lightning, which strikes all around us, and finally the rain comes down in front-loaders. I watch from the cockpit for a while and then shoo the dogs into the cabin, where I can have a small nervous breakdown and a cup of hot tea. That was a close-run thing!

Before I think too much about the idiocy of that adventure, burnished or not, I shake myself back to the present, and hope I haven’t passed my exit or put my laundry from the dryer back into the washer or something. But all that aside, if you are still reading this (or I should say still reading this and it’s still winter), you might consider whiling away a few hours reliving a few boating adventures yourself, or safer yet, dream up a few new ones.

CBM Cruising Editor Jody Argo Schroath, with the help and not infrequent hindrance of ship’s dogs Bindi and Sammy, goes up and down bays, rivers and creeks in search of adventure and stories.

You’ll Want to See This: PART I

Come along on Part One of Moment of Zen’s Potomac River cruise. There will be ghosts & the threat of a gale. 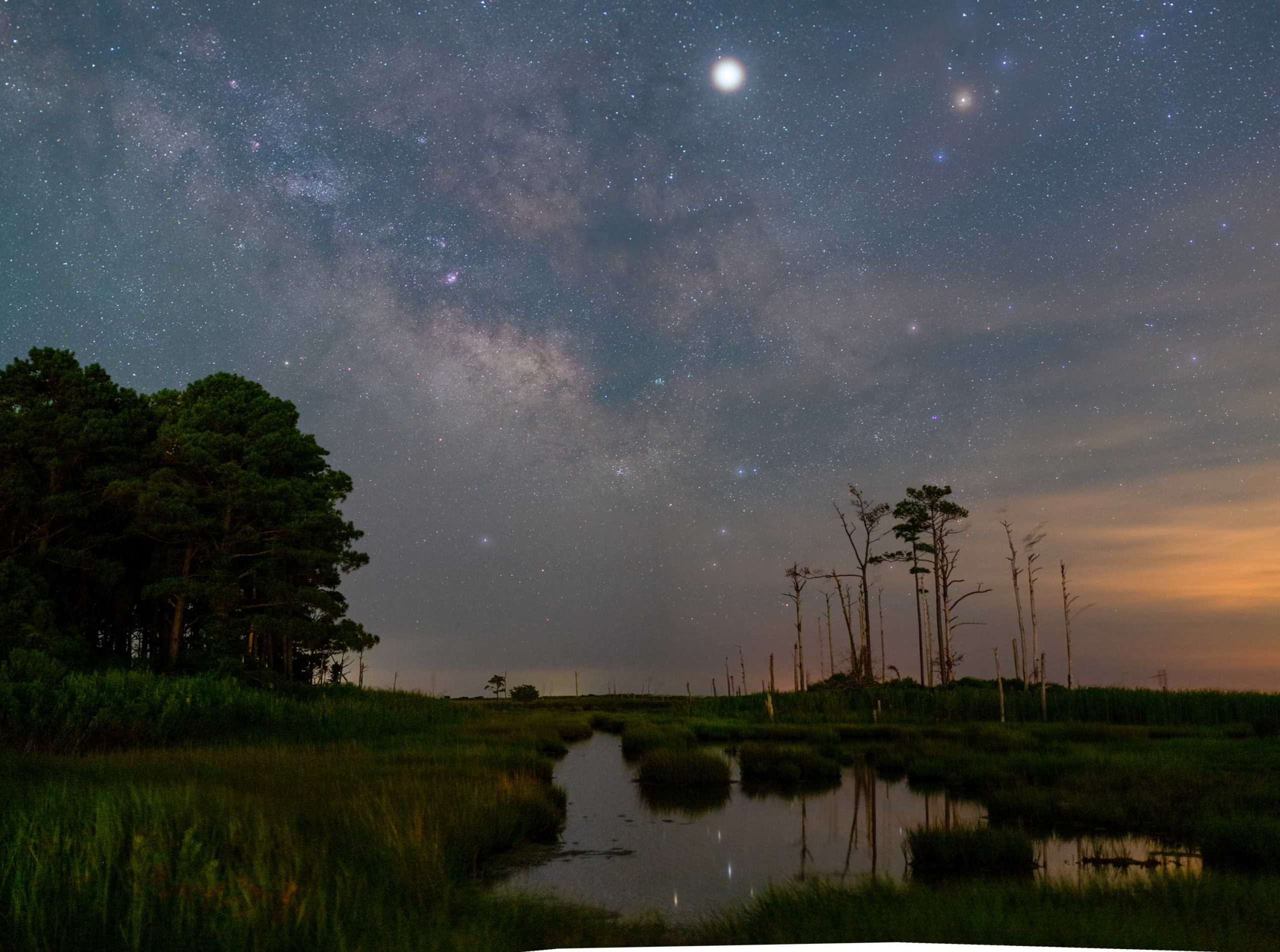