It felt, to her, something like what Jonah must have experienced after being swallowed by the whale.

Two decades ago, a Baltimore reporter with experience on all kinds of vessels found herself reporting an environmental story from the decks of the M/V Cape Wrath. The iron Leviathan, in whose belly Candy Thomson wandered with a notebook, is currently docked in Port Covington, on view to motorists heading north through the Fort McHenry Tunnel and locals walking their dogs.

“I’d been on big ships, even warships, but the Wrath was another level,” said Candy Thomson, a former outdoors writer now retired to Cape Cod. “It was like being a dot.”

The view of the 697-foot-long, nearly 52,000-gross-ton ship from the water is equally impressive. As are four other Department of Transportation/MARAD “ready reserve” ships docked in Canton and South Baltimore.

“They dwarf the old piers,” said Chris Cleary, operator of an Association of Maryland Pilots launch. “To see them in Locust Point and down by Lazaretto Point reminds me how the shipping industry migrated from the Inner Harbor out to deeper water” to accommodate such behemoths.

Indeed, the ready reserve vessels are not much smaller than the mammoth roll-on/roll-off car carriers from the Far East that come and go from Baltimore, said Jordan Biscardo, an official with the Seafarers International Union, which crews  these ships and two from Military  Sealift Command.

“It’s always a big production when Moran or other tugs are used to sail them,” said Mark Hannon, a deckhand and author living near the Fort Avenue piers where the M/V Antares and the S.S. Denebola are docked.

Hannon’s new novel, The Vultures, includes scenes of police scouring the Buffalo, N.Y., waterfront for a witness to a crime. Here in Crabtown, law enforcement has used the Wrath to train anti-terrorist agents to search ships so vast they could easily hide a platoon.

Indeed, said Cleary, pulling a coal ship out of Curtis Bay might take a half-hour, even in bad weather, “from when they let go lines to when the docking pilot is done. A Military Sealift ship can take up to two hours or more to get underway and finish with tugs.”

They rarely move, sitting sometimes for decades at the ready, as their classification connotes, for orders to steam wherever the U.S. military deems necessary. The Antares and Denebola have been parked here for more than 20 years.

“I’m always curious about what’s inside them,” said Hannon. “Tanks? Helicopters? Artillery? There’s a story that they have their own tugs on board which they can launch so they can dock anywhere in the world if they have to.”

What’s inside now is a void waiting to be filled with all of the above.

A year after the end of World War II—in which more than 30,000 merchant sailors were killed as the Axis targeted Allied cargo vessels—Congress passed the Merchant Marine Ship Sales Act. It states that the nation maintains a fleet of ships in reserve for national defense and emergencies. In peacetime, the ships have been loaded with grain for humanitarian missions.

Today, that fleet numbers some 100 vessels, mostly dry cargo ships like the Wrath and most of them anchored on the James River in Virginia, the Port of Beaumont in Texas, and Benicia, California in the Bay Area.

More than half were activated during the First Gulf War in 1990 and 1991, carrying some 3,000 civilian seafarers—many who hadn’t been to sea since the Vietnam War. In 1992, several were used to ferry food to the famine in Somalia. And once in a while, they leave the pier to blow the dust off and have some fun.

In 1998, the Wrath took a class  of middle-school students from Reisterstown on a short excursion to Chesapeake Bay Bridge to give  school kids a gull’s eye view of that year’s Whitbread Round-the-World Race. In 2015, the hawser lines connecting the Antares and the Denebola became a perch for a couple of out-of-towners a long way from home: a pair of brown boobys, a seabird with a conical beak that calls the Dry Tortugas home.

And a few weeks before Thanksgiving 2020, “a booby returned for a rare visit to the MSC ships tied up at Locust Point,” said Cleary. “It was hanging out with the cormorants that perch on the dock lines.”

And then, said Cleary, the booby moved on. But the ready reserves sit and wait, providing steady work for a certain type of sailor who prefers a normal working life. “The type of sailor who doesn’t want to go to sea, who’s not looking for a 70-day trip to Kuwait and back,” said Hoskins, who worked on several of the reserve ships before taking the port agent’s job with the union. “I liked being on a ship that never went anywhere.”

Rafael Alvarez sailed as a laborer on S.I.U. contracted merchant ships as a teenager and again in 2001 after leaving the City Desk of the Baltimore Sun. He can be reached via [email protected]. 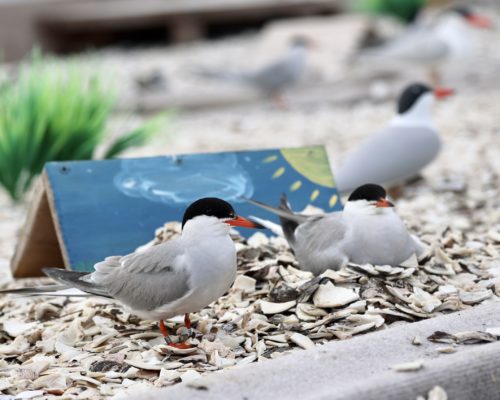 Prince of the Wye