Captain Ed Farley sits in the shade beneath a transplanted lighthouse at the water’s edge at the Chesapeake Bay Maritime Museum in St. Michaels. The circa-1870 structure, standing on spindly metal legs just as it did when it guarded the shoal at Hooper Strait, shields him from the hot August sun. He adjusts his weathered canvas cap, revealing a shock of hair bleached by weather and time, the same color as his thick moustache.

This is not his preferred temperature. He likes the winter months, the ones with the letter “r” in them.

That is the season when he is out on his boat, the H.M. Krentz, one of the few remaining skipjacks on the Chesapeake Bay, bringing in oysters in the same way watermen have done for more than 100 years. The vessel is waiting for his care just a few feet away, moored at the end of the spit of land along the Miles River.

In the winter, its decks are piled with rough bivalves slick with grey mud after the 70-foot wooden boat with the unmistakable white sail comes alive with the wind and scrapes oysters from the bottom of the Bay. In the summer, it carries weekend tourists in polo shirts and shiny sunglasses on two-hour pleasure sails to learn about the ecology of the Chesapeake Bay and the fading way of life of the Chesapeake waterman, a brush with living history.

Farley was one of the first Maryland watermen to welcome tourists onto his boat in the off-season to keep the heritage of the working skipjack alive. In a world of dwindling harvests, he’s happy to bring visitors along for the ride. 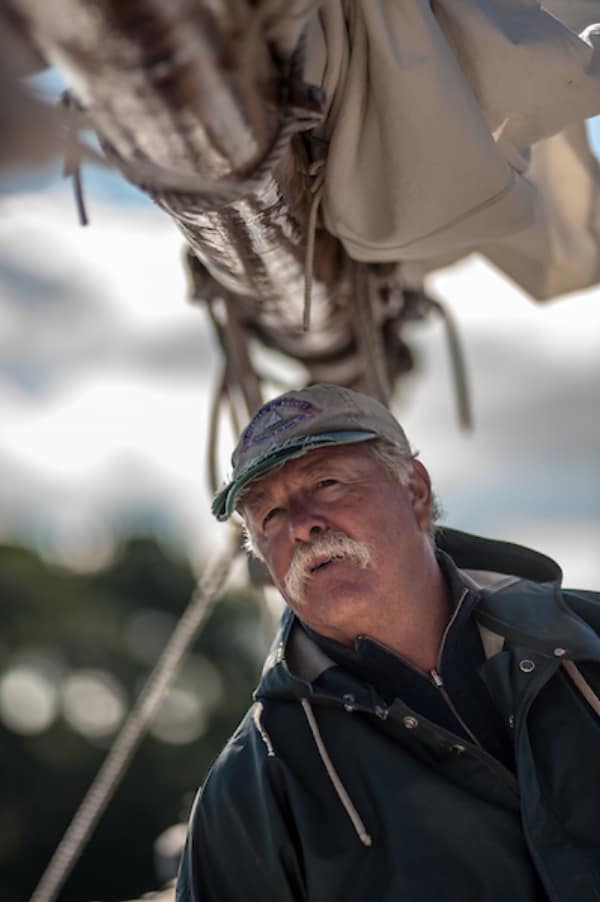 Not from around here

Forty-six years ago, Farley sailed his family’s boat from his home in New England, down along the East Coast and into the Chesapeake Bay. He never left.

“I told my parents I was going to take a year off, and I can probably say next year will be my 50th year,” he says. It was the beginning of his so-called “education by experience.”

He was young and looking for an adventurous life in the outdoors. He was a rugged individualist even then.

“I saw some of the skipjacks in February, and that intrigued me enough to think that one of the captains might take me out—just for the day—just to be able to say I’d been on an actual working skipjack,” he said.

He knew a little bit about the boats from books and National Geographic. The iconic Maryland workboat with the sweeping canvas mainsail and low wooden deck had been used to dredge oysters in the Chesapeake Bay since the 1890s. At the turn of the 20th century, the Bay’s oyster fishery was one of the most important in the United States.

“I really wanted to experience it to know what it was like to dredge oysters, and I was surprised that they were still here,” he said.

The first two captains said “no.” The third said “yes.”

“That first day intrigued me and I loved it. I like cold weather so a wintertime fishery was perfect,” he said.

Farley worked hard to prove he could do the job and worked his way up from a deck hand to captain.

“They were constantly challenging me and telling me I was green as September cabbage,” he said of the skipjack captains who had been plying these watery fields for generations. “They weren’t going to scare me off easily.”

By 1975, he had his own boat, the Stanley Norman, and became an official part of the Chesapeake Bay skipjack fleet, the last commercial sail-powered fishing fleet in North America.

“I love the Bay and saw that there was a sustainable lifestyle,” he said. “I made a living from 1975 to 1985 with my own skipjack. I made my livelihood 100-percent from harvesting oysters.”

However, the winds changed for oystermen in the mid-1980s. After years of increasing pressures from overharvesting and development along the Chesapeake, the harvest was hit by a devastating blow—a duo of oyster parasites called Dermo and MSX that decimated the population.

That’s when Farley decided to diversify. “You could see handwriting on the wall,”
he said.

He began partnering with the Chesapeake Bay Foundation to operate an environmental educational program from the deck of his skipjack, introducing thousands of schoolchildren and teachers to the estuary by water. He eventually sold his boat to them so he would still have time to dredge oysters in prime season, but there was something about educating the public that stuck
with him.

In 1990, he bought the H.M. Krentz, a skipjack built in 1955. He had it inspected with the Coast Guard so he could carry passengers and began using it year-round—in the winter to dredge oysters and in the summer to share his love of the Chesapeake Bay.

“I didn’t really want to be in the tourist business, but working on education on the Bay would be a good thing,” he said. 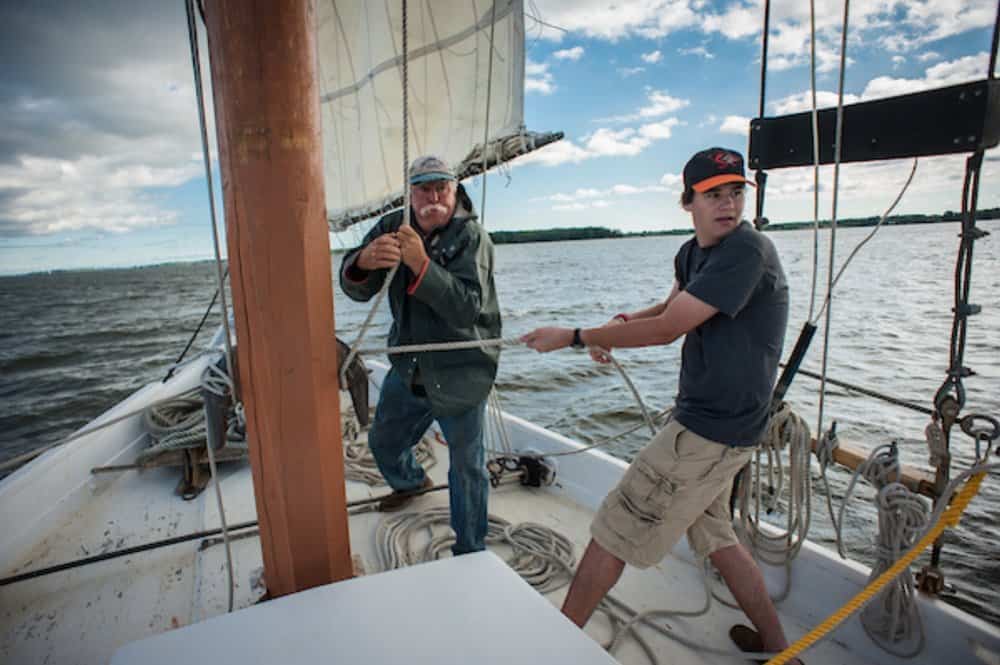 At the height of their popularity at the turn of the 20th century, as many as 600 of the hand-built boats scraped oysters from the bottom of the Bay and its tributaries. They became so strongly identified with the Chesapeake Bay that Maryland made them the official state boat.

Today, only a handful of skipjacks continue to work the Bay. The couple of dozen that still exist are in watermen’s hands or are being used by educational organizations or museums.

This is part of what makes Captain Farley’s tour particularly special. Not only is the skipjack an endangered species, so—some would say—is the Maryland waterman.

After the oyster and crab fisheries crashed in the 1980s and 1990s, Maryland spearheaded an effort to train watermen to lead public tours, a way to help preserve and share their history while supplementing their income. Farley had already set the standard, and he helped train other watermen in a new role.

“Ed’s the one that really started this business around here,” said Pete Lesher, chief curator at the Chesapeake Bay Maritime Museum, which offers a berth for the historic vessel and a jumping-off point for Farley’s tours. “He knows the river and particularly the recent history. He knows exactly where to go to find the oysters. It’s a great experience, and he’s a great storyteller. He’s the real deal.”

From the mooring by the white and black lighthouse, Farley sets sails with groups of up to 32 people, from wedding parties to family reunions to curious neighbors, out for a couple of hours on the Miles River, a tributary of the Chesapeake Bay.

“We let the wind determine which way we go—or my own fancy,” he says, without a wink of his pale blue eyes.

Along the way, he talks about the Bay’s geologic formation, what it looked like when Captain John Smith first sailed into the area in the 1600s, the history of the fishery, and a little bit of Bay science. He might even ask you to take off your Rolex and lower it into the river to check the water clarity. He will do anything to get and keep the attention of his guests.

“They are not going to get on and off of my boat without learning something about the Bay,” he says. “I encourage people to help pull the sails up and steer. We try to make it interactive. When it’s time to bring the dredge back, I encourage kids to help.”

Farley has a special permit to drag a miniature hand-scrape dredge (a metal cage that drags along the beds and scoops up the oysters) and demonstrate the oystering. The catch goes back alive into the water alive to replenish the fishery after they have been examined on board.

“The focus of my business isn’t the money,” he says. “The focus is keeping the boat operational and sharing the history of the skipjacks—the significance of the last commercial sailing vessels of North America, right here, that still harvest a renewable resource.” 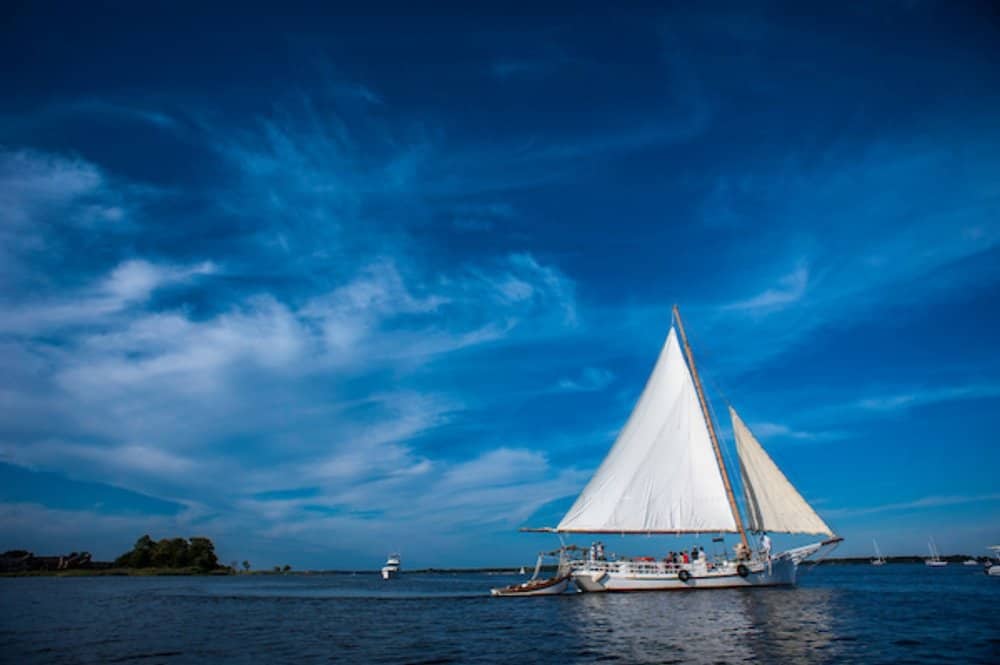 Lifelong Marylander Amy Pelsinsky is an award-winning writer who enjoys sharing off-the-beaten-track travels from Chesapeake Bay and around the world.

The story of a couple with a crazy dream and two schooners.