There was an old-timer aboard the Port Covington cable ship I worked on after leaving the Baltimore Sun in 2001, a true salt from Maine who, in honor of his years, was given light duty (sanding and varnishing) while the rest of us bent to more strenuous labor.

I’ve forgotten his name, but I’ll never forget his favorite phrase, spoken aloud to no one in particular in the thick accent particular to the Pine Tree State: “She’s a feeder she is.”

I had no idea what he was talking about. But now, having come into a handful of letters written by a seafarer during the Great Depression to his family in East Baltimore, I know.

Very simply, the old-timer meant that the galley on the C.S. Global Link turned out more food than the average man could eat. The Downeaster was old enough to have sailed when a well-stocked larder on merchant ships was not a given.

A feeder, along with freedom, adventure, and steady work, was what Edward F. Mislak set his sights on in the teeth of the Depression when the 21-year-old went to sea, leaving his parents and nine brothers and sisters at 522 South Bethel Street in Fells Point.

The year Eddie shipped out (1934) unemployment in the United States was above 20 percent. He made $35 a month (less than what he’d been told) and, as long as he didn’t fail at the job, could depend on it.

Around the country, before competing seafaring unions began to consolidate, wildcat strikes were breaking out in ports like Tacoma, Washington over the quantity and quality of the chow, overtime, and the desire to sleep on mattresses stuffed with something other than sawdust.

Eddie witnessed what happened to scabs when cornered by union muscle — “I’ve seen noses mashed all the way in,” he wrote — and observed that men in one West Coast port decided to strike “but did not know what it was for.”

What Eddie knew was where his bread was buttered.

Writing to his mother from the S.S. Vermar—a coastal freighter on which he learned the ropes of an Ordinary Seaman (“I was dumb as anything,” he said of his first days) — Eddie let his folks know that his belly was full and all was well.

Eddie had the 4-to-8 shift on the Vermar, which typically carried lumber from the Pacific Northwest and through the Panama Canal to the East Coast. Proud that he was trusted to steer (under the eyes of the mate on duty, whom he’d alert to lights off the bow by ringing a bell), Eddie described how he’d come off the wheel at the end of his shift after everyone else had eaten breakfast.

Writing from San Francisco in early October of 1934, Eddie said: “The mess boy fixes me up.”

On the Vermar—built in Portland, Oregon in 1919 and renamed before being scrapped by Russian owners in 1967—Eddie noted that each man “only gets two eggs, but you get a lot of other stuff—potatoes, bread and meat.”

Not all of the other “fellers,” Eddie wrote, liked eggs. Eddie did.

“I get the mess boy to save ’em for me,” he wrote, noting that the extras “are a little cold sometimes,” but plentiful, up to four on some days and, said Eddie, “fresh.”

He lends a guy on the ship a dollar and not only does the man pay Eddie back but “he gives me his piece of pie every time we get it,” he writes. “I get more than I can eat on this ship.”

Eddie was the second of ten children, aged about 3 to 21 at the time he shipped out, born to the Polish-Catholic immigrants Bronislaus “Ben” Mislak and his wife, the former Anastasia Niesobinski.

As for the care of his soul while away from heavily Catholic Fells Point, Eddie allows that he fasts from meat each Friday, except for the time he forgot. And while in San Francisco, attended Mass at what is now known as Old St. Mary’s Cathedral on the edge of Chinatown.

And he advises his mother, who arrived in the United States as a teenager without English, a language Eddie’s father never acquired, to beef up her correspondence.

Eddie Mislak would not live to send many more words home to Bethel Street.

By April of 1935, he is off of the Vermar and working for the McCormick Steamship Company though he does not give his vessel’s name in the return address.

“Today is Easter — for breakfast two eggs, chicken and cake,” he wrote from San Francisco on April 21st. “…for dinner soup, roast pork and pie…for supper two eggs, steak and ice cream.” The fine distinction between dinner and supper seems to have been lost along with large ships of grace and elegance since the advent of “lunch” as the midday meal.

By late 1935, when his last missive to Baltimore is a Christmas card, Eddie was sailing on the S.S. Iowa, built in 1920 by the Western Pipe and Steel Company of San Francisco.  This single-screw, 410-foot, coastwise freighter, should not to be confused with the American battleship that carried Franklin D. Roosevelt to overseas meetings with Churchill and Stalin during World War II. The Iowa of which we speak is the one on which Eddie and 33 of his shipmates perished just after midnight on January 12, 1936 in a hurricane on the shoals of Peacock Spit at the mouth of the Columbia River. The bodies of ten of the dead were recovered. Eddie’s was not.

The “spit” is a treacherous, half-submerged sandbar named for the 1841 wreck of the U.S.S. Peacock, a Navy ship used for scientific expeditions that foundered there. The spot where the Iowa sank in 80-mph winds in what is considered the 20th century’s greatest maritime disaster on the Columbia River Bar is just off of Cape Disappointment.

The day after the wreck, the Baltimore Sun ran a front-page story with a crude, re-touched photo of Eddie and a sidebar on survivors. The story says that Eddie would have last seen his family the previous September when the Iowa “made the last of its infrequent calls to Baltimore.”

Nine letters from Eddie Mislak have been preserved by his family, eight narratives and one “log” detailing the voyages of the Vermar. The missives were first saved by his mother, who received them nearly 90 years ago, and recently passed along at a family funeral to Daniel P. Mislak, Sr. of Hampstead, one of the many nephews Eddie never lived to see.

Whatever letters Eddie kept from his mother and his brother Jim, Dan’s father and the oldest of the ten Mislak children, went down with the Iowa.

Sitting with his first cousin David Mislak at the G&A Hot Dog Diner in Highlandtown, just a mile or so from the old family home on Bethel Street, Dan said that the letters impressed upon him “how much harder life was then—the resilience and independence you needed to survive.”

Dan’s father, to whom Eddie confessed that he went to sea to get out from under the authority of his parents, was a stevedore on the Baltimore waterfront.

James J. Mislak (1912-1986), retired from the International Longshoremen’s Association in 1974. In a long career of handling pre-containerized cargo, Jim Mislak lost a finger and broke multiple bones and several ribs. He also carried an ugly, three- to four-inch scar on his shoulder after being stabbed in a dockside fight.

On the green Formica table-top between Dan and Dave at the G&A sat the letters from a young Baltimore man who lit out from the oldest neighborhood in the city to see the world, tattered envelopes adorned with two-cent George Washington stamps and a couple of Ben Franklin stamps that cost a penny.

Rafael Alvarez is the author of Basilio Boullosa Stars in the Fountain of Highlandtown, a collection of short stories of Baltimore’s ethno-urban experience. He can be reached via [email protected]. 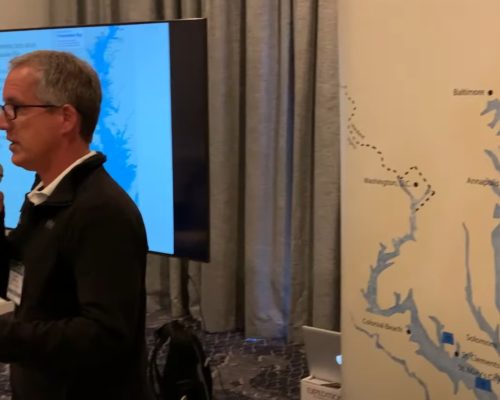 A day as an apprentice at Chesapeake Bay Maritime Museum