When you meet Wes Seigler, it only takes a moment to gauge his passion and talent. His mental gears turn constantly as his creative ideas roll out, emphasized by his tinkering fingers. He analyzes everything, pointing out weaknesses and strengths.

Seigler is a Chesapeake Bay native. His family has a place near Reedville where he spent weekends and summers, fishing on the Great Wicomico River. He went off to Ohio State University to play division-one soccer, where he blew out his knee. He took to cycling to rehab his knee and eventually turned pro and raced for 10 years, four of them in Europe with a Dutch team. Along the way, he modified and built bike parts to make them simpler, lighter and stronger. He designed components for himself and eventually for Shimano, the dominant bicycle part and fishing gear manufacturer.

Seigler retired from the pro circuit at 31 and returned to Virginia, to chart his next career move. He loves fishing, so he built a boat for bluewater adventures. On an auspiciously successful trip, he and his pals hooked 13 white marlin, but broke some reels in the process. Back onshore, Siegler diagnosed the weaknesses and came up with solutions. His resulting design was for a simpler reel with fewer parts to fail. Fewer parts meant that the frame and other components could be more robust without adding overall weight.

He shopped around for someone to make his design. He traveled to Asia and saw the factories where most of today’s mass-market reels are made. He found the process expensive, complicated and frustrating. While talking to a Shimano representative about bike parts and reels, the rep suggested that Wes just make the reel himself. So he did.

He bought two used Computer Numerical Control (CNC) milling machines. One came from eBay. When they arrived, he didn’t even know how to turn them on, let alone get his design inside the machine and back out as a fishing reel. So he sat down and taught himself computer-aided design code. He took some classes. The result was the first Seigler reel, a thing of beauty.

He soon had orders, and he fulfilled the demand from a small shop on the Northern Neck of Virginia near his home. He broadened the product line and the orders kept coming. He needed more workspace. The best deal came from a place in Florida, but he wanted to stay in Virginia along the Chesapeake Bay. Then, a suitable opportunity opened up in Virginia Beach, the base for Virginia’s avid saltwater fishing crowd. Seigler Reels moved there in October 2018, with additional machinery and 10 models of fly and geared level-wind reels to choose from.

Seigler’s attention to design and engineering detail is notable by how he is driven to question and improve
on industry standards. For example: Take the machine screws that hold the frame, handle and mounting hardware together. While most reel manufacturers use plastic or stainless steel screws, Seigler uses aluminum. But aluminum is not as strong as stainless, right? According to Seigler, “We tested some beefy aluminum screws and found that they are certainly strong enough. And using aluminum screws in an aluminum reel results in less corrosion. You will always be fighting galvanic corrosion when you put stainless steel against aluminum in a salt water environment.”

The SG (small game) lever drag ($300) is their most popular reel. The reel can hold 475 yards of 50-pound braid and it weighs 12.8 ounces. Each crank of the handle reels in 38-inches of line. Add the super-smooth, stacked, carbon-fiber and stainless-steel drag  system that can be quickly adjusted down to 28-pounds, and you have the best reel in its class. Seigler’s six conventional reel models feature giant cranks and handles, and the trademark lever drag. He also makes a beautiful, low-profile, star-drag reel for surf casting for sharks and big red drum.

Seigler is obsessed with reducing the startup drag quotient in his reels in order to mitigate the chance of losing a fish on the take. His fly-reel prototypes had no outgoing click, a traditional feature that does nothing to increase fly-angling success but offers an exciting “screaming reel” sound. But fly anglers like that sound, so he added it in a way that adds virtually no startup resistance.

Seigler makes three saltwater-focused fly reel models, all featuring the unique lever drag system, which consists of layers of carbon fiber and stainless-steel plates. The lever adjustment allows precise, instantly repeatable drag settings and mid-fight adjustment without having to switch hands. The SF (small-fly for 6- to 8-weight lines $750), MF (medium-fly for 9- to 11-weigth lines $1,000) and BF(big-fly for 11- to 14-weight lines $1,500). The BF measures 4.5 inches in diameter, and it’s built for whipping leviathans, as proven by Seigler’s recent test mission to catch giant trevally in the Seychelles. The MF won the best fly-reel award at the prestigious 2018 International Convention of Allied Sportfishing Trades Show, the world’s largest fishing trades show.

Seigler has more designs in the works—a larger blue-water conventional reel, a huge fly reel for chasing billfish, and a more-affordable fly reel for starters.

All Seigler reels come with a lifetime warranty and you can buy direct at Seiglerfish.com and at specialty Tackle shops such as AllTackle in Annapolis, Tochterman’s in Baltimore, Bishop’s in Yorktown.

Kendall Osbourne is a keen saltwater fly angler, photographer and outdoor writer based in Norfolk. 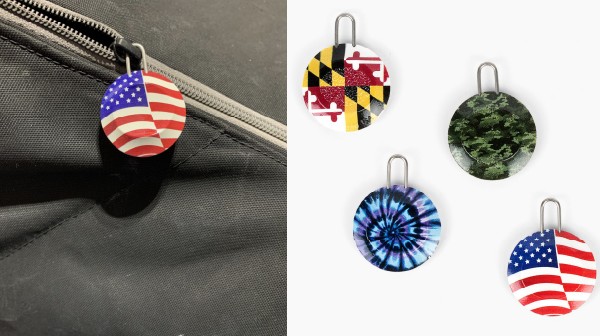 Dr. ZipTip to the Rescue

A basic look at what CHIRP sonar will do to help you catch fish.  by

Looking for the perfect present this holiday season? Stay local with our picks of #MadeOnTheBay products.