Former Maryland Governor Harry Hughes, an Eastern Shore native and strong advocate for the Chesapeake Bay, has died at the age of 92.

Hughes, a Democrat born in Easton, served as a Maryland delegate beginning in 1955 , representing Caroline County. He was elected to the state Senate in 1959, serving for Caroline, Cecil, Kent, Queen Anne’s and Talbot counties. He went on to serve two terms as Maryland governor, from 1978 to 1987.

While he was governor, Hughes advocated for the environment and the Bay, approving the Chesapeake Bay Agreement in 1983. It was a precursor to the Chesapeake Watershed Agreement we know today, and one of the first major efforts to protect the Bay from pollution and overfishing/ hunting.

According to the Chesapeake Program, “the 1983 Agreement laid the foundation for a cooperative program that included four jurisdictions along with the Chesapeake Bay Commission and the federal government.”

Governor Hughes continued to support Bay cleanup efforts after he left office. He was a member of the Chesapeake Bay Trust from 1995 to 2003. and chairman of the Blue Ribbon Citizens Pfiesteria Commission in 1997. The commission was appointed to determine what caused the toxic outbreak of the legion-causing microbe Pfiesteria piscidida in Maryland waters that summer, and to recommend short-term and long-term solutions to prevent more outbreaks.

Governor Larry Hogan has ordered all state flags to fly at half-staff until sunset on the day of Hughes’ burial.

In a statement, Governor Hogan said, “The First Lady and I are deeply saddened to hear of the passing of Governor Harry Hughes, a longtime friend and Maryland legend whom I deeply admired… His dedication to our great state…and his service to our nation as a member of the Navy Air Corps during World War II leave a legacy behind that will be forever remembered.”

After more than a year of negotiations, a key Chesapeake Bay port and a regional 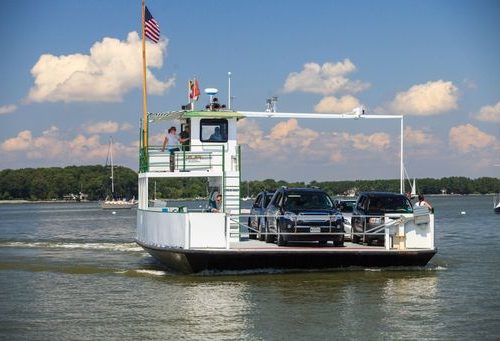 Md. Counties Seek Proposals for Ferry System They Aim to Bring to the Bay

With Pennsylvania lagging badly in helping to clean up the Chesapeake Bay, a new report