The Atlantic States Marine Fishery Commission (ASMFC), a federally sanctioned board of scientists, analysts and state representatives charged with coordinating and managing Atlantic coast fishery resources, has ruled that the Commonwealth of Virginia is “potentially out of compliance” in response to the state’s failure to implement a mandatory 51,000-metric-ton cap on its Chesapeake Bay menhaden harvest. The next step would be to refer the violation to the office of the U.S. Secretary of Commerce, which could shut down Virginia’s menhaden fishery entirely.

An Omega Protein menhaden factory ship at work on the Chesapeake Bay.

Virginia’s massive reduction fishery is dominated by Texas-based Omega Protein operating out of a Reedville factory employing about 200 people. The company benefits from an allocation representing nearly 80 percent of the allowance for the entire east coast. Omega operates a fleet of ships, purse seine boats and spotter planes to find and capture entire schools of these ecologically important forage fish. The fish are hauled to Reedville where they are processed into additives for cosmetics, health products, animal feed and fish meal.

Menhaden are critical components of the Chesapeake ecosystem as food for other keystone species such as striped bass, bluefish, dolphin, and osprey, and they filter the Bay by consuming algae from the overly nutrient-rich water. Scientists have established that controlling the removal of menhaden is necessary for the health of the ecosystem. Consequently, ASMFC is following through with plans for factoring in the ecological value of menhaden in the management plan, a direction that Omega Protein and some in the Virginia legislature are resisting.

Virginia is unique in that the state’s menhaden fishery is managed by the legislature instead of by professional state-employed fisheries managers, thus throwing the decisions on harvest into the political realm. At the moment, the Virginia legislature is still in session to consider various amendments and vetoes from Governor Northam. Therefore, ASMFC decided to postpone the non-compliance referral until August while they monitor the harvest and any movement by the legislature to comply.

In a statement, the Coastal Conservation Association, a national fisheries advocacy group, applauded ASMFC’s move to hold Virginia accountable, stating, “This is a fair step given the situation, but it should be made absolutely clear that the ASMFC will not stand by and allow a state to simply disregard provisions of a duly approved and adopted management plan. We support the ASMFC’s action and hope Virginia will agree to reasonable regulation of the menhaden reduction industry in the Chesapeake Bay.”

Chesapeake Bay Magazine is following this important issue, and we will keep you posted.

By Timothy B. Wheeler, Bay Journal News Service Democrats and Republicans may not agree on 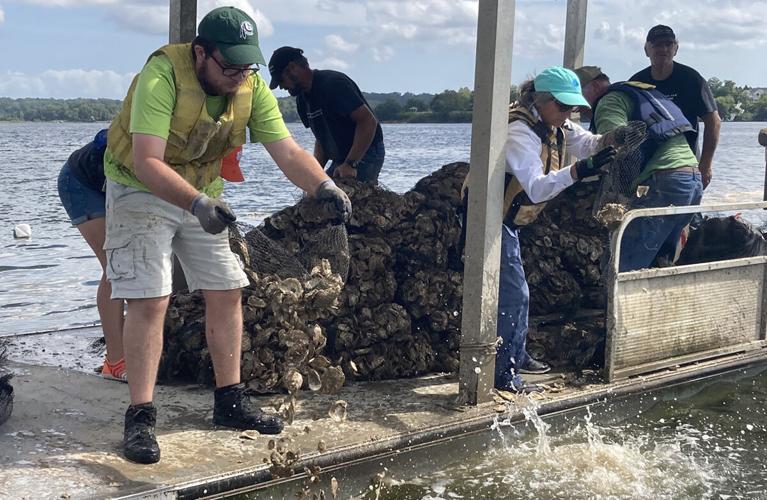 Volunteers Won’t Give up on Oysters in St. Mary’s Co. Waterway

By Timothy B. Wheeler, Bay Journal News Service Some Southern Marylanders refuse to give up