The Bay’s newest conservation spokesperson  is a mermaid.

Legends have long told of mythical creatures in the Chesapeake Bay—most notably Chessie the Sea Monster, said to be a 30-foot-long water serpent. The Bay’s answer to the Loch Ness Monster, Chessie is so storied that Animal Planet ranks it 8th among the “Top Ten Scariest Sea Monsters.”

But recently, another mythical Bay creature has come to light: the Chesapeake Mermaid.

You might say she’s the antithesis of a scary, slimy sea serpent.

The Chesapeake Mermaid has the face of a beautiful woman and the diamond-patterned tail of an Atlantic sturgeon. Her hair is as dark and soft as Magothy River silt. She loves the Bay with an unbridled passion. And I’m here to tell you, she is real.

The Mermaid has been frolicking in the Bay, largely undetected, for some 400 years, she tells me. But in the past two years, she has changed her elusive habits. The Chesapeake Mermaid now ventures on land several times a year to inspire people to protect the Bay.

I arranged to meet the finned one, fittingly, at the Oyster Recovery Partnership’s Mermaid’s Kiss Oyster Fest. Perched at the entrance to the fundraiser party, the Chesapeake Mermaid greeted guests enthusiastically.

“Welcome to Mermaid’s Kiss! There are lots of yummy oysters inside!”

I watched the faces of the guests (all adults) as they encountered the Mermaid. Some gave a chuckle and a hello, others lined up to pose for photos, and a couple asked permission to touch her glistening tail.

“Hee-hee-hee! That tickles!” she exclaimed.

The Chesapeake Mermaid doesn’t make appearances for money or fame. What would a mermaid do with money, anyway? She believes that by grabbing the attention of landlubbers, she can encourage them to volunteer as Bay conservationists.

Her message is to “channel peoples’ attention from something mystical and magical to the first-hand experience of volunteering.”

The Chesapeake Mermaid is active on social media (this is the 21st century, after all), and she says it’s a valuable tool to spread the word about various Bay conservation groups that need help.

The Mermaid engages both adults and kids, appearing at street festivals, farmer’s markets, and environmental events. Once, she even swam up onto the beach in Ocean City, blowing all the beachgoers away.

Ms. Mermaid makes it very clear: “Mermaid magic” takes a lot of work and a team of volunteers to help her. A mermaid can’t just walk down the street, after all. She travels with a large trailer emblazoned with her logo. As she puts it, “Mermaids need wheels and muscle.”

The Chesapeake Mermaid also comes with a sidekick: a giant, funnel-shaped oyster larva that she has nicknamed “Larvey, the magical bivalvian.” She often wears him as a headpiece, and he figures prominently in her children’s book, The Last Bivalvian, which the Mermaid describes as “a science fiction fantasy view of our Chesapeake Bay that focuses on the importance of oysters in our past, present and future.”

As for the Chesapeake Mermaid’s future? She plans to continue to engage people, even if it sometimes means putting her fin on full display: a fish out of water for the sake of the Bay.

If you’d like to invite the Chesapeake Mermaid to appear at an event, to buy The Last Bivalvian for a child or adult you know, or just to learn more about this magical creature, visit www.chesapeakemermaid.com 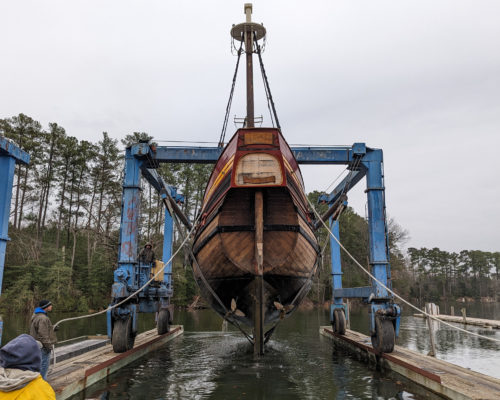 1978 Maryland Dove hauled out for the final time

With spring, we return to the streams of our youth.