The Kinnamons are native Tilghman Islanders. Their lives as professional boatbuilders are strongly tied to their growing-up years, when commercial fishing and boatbuilding were vital to island life. They each own commercial fishing boats and work in Maryland’s blue crab trotline fishery. J.C., with the help of his father, builds about four new glass-over-wood deadrise workboats a year. With knowledge that comes from first-hand experience, the Kinnamons have clear insight into what a Chesapeake Bay waterman wants and needs in a workboat.

Life started for John 82 years ago when a local mid-wife assisted his mother Mary in delivering him into this world. He was born in a house on Bar Neck Road along the Blackwalnut Cove shoreline. Shortly thereafter, the family moved across the cove, to a home on Fairbanks Road where he grew-up. The house had electricity in two rooms, no running water, and two coal-oil stoves to heat the kitchen and living room, he said.

John’s father, Elmer, was a commercial fisherman who worked out of a 42-foot Hooper Island-built, box-stern deadrise. A man seldom forgets what he pays for his first house. A commercial waterman never forgets the price of that first new workboat and passes that knowledge on to his son.

“Daddy had that boat built in the early 1940s on Hooper Island and paid $375. It was brand new,” said John. “That’s all he paid for it. You know [at that price] it was a long time ago.” John’s father ran fishing parties, and drift-netted for rockfish from his boat.

“I learned early in life what a good boat meant to a waterman’s family,” he said.  “I also learned from working the water what watermen need in a workboat.”

John got a taste of boatbuilding early in life alongside his grandfather, Al Kinnamon, who built row and tow skiffs on the island.  “My grandfather built fish [also called tow] skiffs for haul-seine and pound-net fishermen,” he said. He also built John a new row skiff and gave it to him on his eleventh birthday.

“If you were a boy growing up in the city, you’d get a new bicycle to ride around on, but on the island, a boy got a row skiff, and that was a big deal,” he said. “When I got that skiff, I thought I was king of the island.”

John used his row skiff as a platform to chase down crippled geese, trap muskrats, pole the shallows to dip-net soft-shell crabs, and catch a grey trout or two on hook-and-line for his mother’s frying pan.

“I spent a lot of time with my toes in the mud,” he recalls. “In the summer, when I’d go soft crabbing, I used a car inner tube and a basket to hold my catch. I’d tie a line to the basket and around my waist and wade along, chasing down soft-shells with a dip-net. We children had a steady market. There was an old fellow who bought crabs from us. He paid us twenty-five cents for a dozen crabs providing they all had two claws. If just one crab was missing a claw, he wanted a baker’s dozen for twenty-five cents.”

In 1954, John quit school in the tenth grade and enlisted in the Navy. When he came home from military service, he bought an old boat, and he and his grandfather fixed it up. John worked it in the oyster and crab seasons. Over time, he realized he had a knack for fixing-up and selling old boats. “I’d fix one up for the spring trotline and fall oyster seasons; work it myself and then sell it just before Christmas. That gave me Christmas money for my family and time to fix-up another old boat,” he said. “That’s how I got into the boatbuilding business.”

In the mid-1960s, John started working at area boatyards. He worked at Kastel Boatyard in St. Michaels and Fluharty’s Boatyard on Tilghman Island where he expanded his knowledge of wooden boat construction. He built his first commercial workboats in 1969. His first six new boats were deadrises built of wood with cross-planked bottoms. All the while, he was repairing old boats and maintaining a boat of his own. While repairing his own boats, he started experimenting with fiberglass.

Around 1974, Tilghman Island boatbuilder Bunky Miller purchased boat plans to build a fiberglass-over-plywood boat from Glen L. Witt of Glen L Marine in California. “Bunky built a boat and used it himself and then built another one for his son-in-law,” said John. “I saw the boats and I liked them. I talked Bunky into building one for me. He also agreed to allow me to help him build the boat so I could learn the technique.

“We got about two thirds finished when Bunky turned the job over to me,” said John. “The day it was completed a man came by and bought the boat. I immediately started another one and before I could finish it, I had it sold, and I had orders for two more boats.”

As John experimented with fiberglass-over-wood construction, he saw where he could incorporate changes closer to the style and design of the traditional Chesapeake Bay deadrise workboat. “When we started, nobody much on Tilghman Island knew anything about fiberglass,” said John. “We learned as we went and flew by the seat of our pants.”

J.C. grew-up on Tilghman Island with a similar upbringing. “I don’t guess I was much more than five years old when Daddy took me in the boat-shop and put a hammer and nails in my hands. I’ve been beating nails ever since,” said J.C..

“I started with a row-skiff, trapping muskrat and catching soft-shell crabs in the summer,” he said. “I loved to work a trotline, and Daddy gave me an old/new boat every year. If we were going to have much of a Christmas, I knew the boat I used in the summer would have to be fixed up and sold, so I didn’t get to attached to any boat I had.”

When J.C. graduated from high school in 1987, he went to work for his father and he continued to work in the trotline fishery. The father and son have an affable relationship, and they like to tell stories on each other. Sitting in J.C.’s warm boat-shop with the father and son huddled around a warm barrel wood stove, John told the story of 12-year-old J.C. who proudly brought home three Canada geese he had killed while hunting. “J.C. laid the geese on the kitchen floor. One of the geese won’t dead. He jumped up and started flying around the house,” said John. “We had a time catching that goose.  I told him, ‘next time J.C., make sure the goose is dead before you bring  him home.’”

J.C. spun his own yarn—a story of the boat his father built that was “positively not for sale!”

“Twenty years ago, Daddy built a boat for himself to go trot-lining,” said J.C.. “It was outside of his boat-shop by the road when a watermen came by and asked him how much he wanted for the boat.

“Daddy said, ‘the boat’s not for sale at any price!”

“The next day the same watermen came by with a cigar box full of cash-money and dropped it on our kitchen table,” said J.C..

“Daddy counted the money out.” John interrupted—”Yeah, I couldn’t get the word ‘sold’ out of my mouth fast enough!”

J.C. builds about four boats a year with his father helping out. John builds a boat a year in his shop located next to his home near the bridge crossing over into Tilghman. J.C.’s shop is located just across Knapps Narrow Bridge on the island.

J.C. built four 38-foot deadrise boats in 2019, and John built one for himself to go crabbing. When asked what fisheries are fueling their boatbuilding businesses, J.C. said, “I can tell you in two words—Virginia oysters!”

Over the past two decades, Virginia oyster harvesting has been on the rise, and that has contributed to a demand for new deadrise workboats. Virginia’s oyster harvest hit a low in 2001 when 23,000 bushels were harvested with a dockside value $575,000. Since then, Virginia oyster harvests have grown to over 600,000 bushels a year with a dockside value over $25 million.  Growth in the state’s wild oyster and oyster aquaculture fisheries have contributed to the resurgence. Kinnamon boats are mainly going to Virginia watermen who are working in the wild oyster fishery and in the Bay’s crab-pot fishery.

Thomas Lee Walton of Walton’s Seafood in Urbanna had J.C. build him a 39-by-11-foot deadrise workboat in 2013. For years, Thomas Lee and his sons worked out of small outboard-powered fiberglass boats to fish peeler pots during the crab season and a 22-inch oyster dredge in Virginia’s public oyster season. The Waltons operate a small oyster-shucking house in the winter and shed soft-shell crabs in the warmer months. With the decline of Virginia’s oyster fishery in the 1990s and early 2000s, oystering had become a secondary business. The demand for the 39-footer came with the emergence of the oyster fishery and the way Virginia started managing the fishery.

In 2007, Virginia initiated a rotational-harvest management plan for certain restored public oyster grounds to give the beds a rest and time to rejuvenate. Virginia’s public grounds range from James River on the Bay’s western shore to Tangier Sound on Virginia’s Eastern Shore. Tangier Sound is a considerable distance from Urbanna, and too far for the Waltons to run daily in a small open boat. The new 39-footer can make the trip to Tangier Sound with relative ease, offers a sturdy dry work platform, and has a comfortable house/pilothouse setup for overnight stays. The Waltons also use the boat to fish and move large numbers of pots in the crab pot fishery.

With the comeback of oysters, J.C. said Virginia watermen are able to spread the cost of a new deadrise workboat out over two fisheries. “When they can make money in their boat crabbing and oystering, versus using the boat in just one fishery, they can justify having a new boat built,” he said.

In February, J.C. had a nearly complete 38-foot glass-over-wood deadrise, which will go to Virginia watermen David Parks of Morattico on the Rappahanock River. Parks will use his new boat in the blue crab and oyster fisheries. Outside of John’s shop was a new 35-foot glass-over-wood deadrise that he built over the winter for himself to work his trotline. J.C. said his father has already had a waterman come-by asking if the boat is for sale. “I told him it was not for sale,” said John.

J.C. winked at his father and said, “We’ll see if anyone comes by with a cigar box full of cash!”

As we sat and talked, J.C. had left the boat-shed, and John spoke candidly of his son. “When J.C. graduated from high school, I encouraged him to stand on his own and not be in my shadow,” said John. “Now I’m old and I’m in his shadow. He builds a mighty fine boat and I’m so very proud of him.” 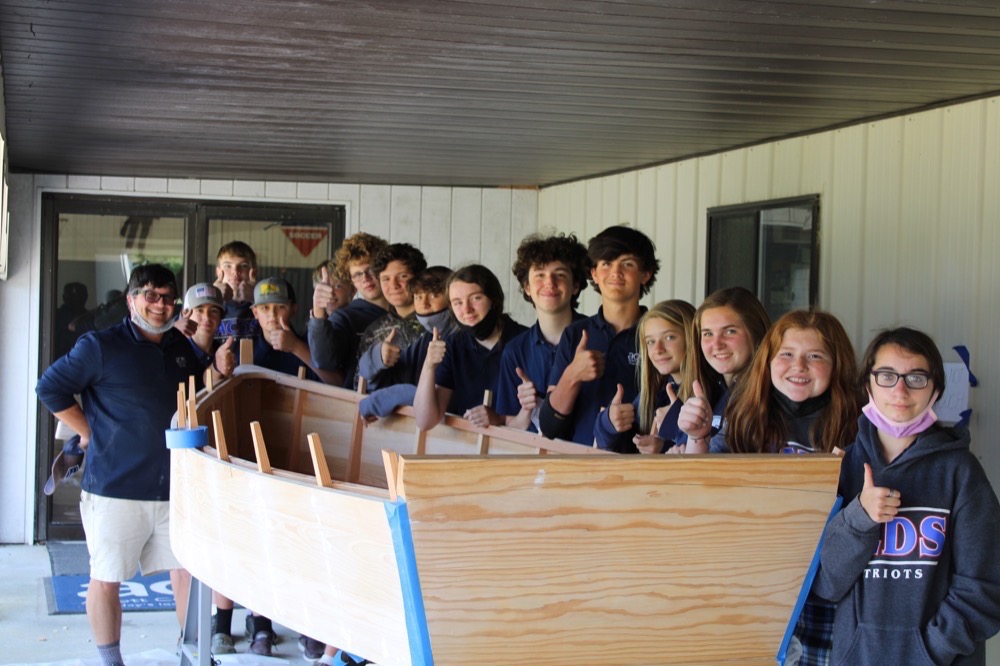 LIVING As readers of Chesapeake Bay Magazine know, the Bay offers the best things to