We are fourteen years into the era of clean outboards mandated by the Clean Air Act of 1992, California
Air Resources Board regulations, and similar directives from the European Union. For those of us old enough to have grown up with carburetor-fed, two-stroke outboard motors, it’s hard to believe that that much time has passed. The old technology got us out on the water for many years, but we breathed a lot of blue unburned oil smoke, spent a lot of money on fuel that got wasted, and changed out oil-fouled spark plugs frequently to cajole our engines into idling halfway-smoothly. If we ran our engines a lot, we had to replace them every few years.

No more. Give credit to the leaders who nudged the process along and thank the marine manufacturers for recognizing that clean air and water are part of the boating appeal, acknowledging that the old technology was dirty, and responding robustly to the engineering challenge with several generations of increasingly clean, quiet, silky-smooth, and remarkably efficient outboards, large and small. That power range now extends from lightweight 2.5-hp clamp-on dinghy engines to fire-breathing 627-hp V-8s. We boating writers who have sea-trialed these engines through the transition and measured speed improvements in relation to fuel flow marvel at the improvements, and, as boat owners, we
smile broadly.

It turns out that the polluting blue smoke and high gas bills from old-style outboards were clear signs of fuel waste, which new technologies could remedy very much to the direct benefit of us boaters. The seven gas outboard manufacturers selling in the United States have responded with fierce competition to produce better and better engines built on an array of digital, metallurgical, and lubrication breakthrough technologies. It’s not uncommon now for well-maintained engines to run reliably for 3,000 hours, with some topping 5,000 (an average recreational outboard runs 50 hours per year).

In parallel, boatbuilders are designing hulls around specific engines. In a significant number of cases, the outboards are replacing straight-shaft inboards and inboard/outboards on boats 30 to 50 feet long, with digital control systems and sophisticated transom brackets allowing two, three, or four engines to run as an integrated team. At Judge Yachts in Denton, Md. for example, all orders for the 36 Chesapeake over the last four years have been for hulls with twin V-6 Suzuki 300s or 350s. Using “digital-backbone” cable technology adapted from the auto industry, modern boats have hull, engine, electronics, and accessories integrated as completely as we expect from a new Ford F150 or Chevy Suburban.

To the manufacturers’ credit, they have paid attention to all boaters, from cruisers looking to power small inflatable dinghies, anglers in 15-foot jonboats, and families in 23-foot runabouts, to offshore anglers running to the canyons. Check the full horsepower ranges of the manufacturers and you’ll see as much attention paid to 9.9s, 60s, 115s, and 150s as the big V-6 and V-8 engines.

So, who makes the best? Tough question. Competition is so fierce that none of the players can afford to turn out lemons. Consider also that these engines are far more complex than their predecessors. Sophisticated electronic engine management systems and self-adjusting valve trains have done away with old-style tune-ups. So, what these modern marvels need mostly is regular lubricant changes, clean fuel, and freshwater flushes. If something goes wrong, diagnosis means plugging them into laptops with the manufacturer’s proprietary software. Thus, for a prudent skipper, the decision on which brand to buy comes down to who will service it. As a boating writer, I have developed respect for all of the brands summarized here, but as a commercial operator whose skiff works for a living, I’ve based my choice on who can keep me running when the chips are down. 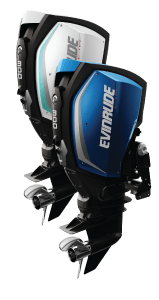 Alone among the outboard manufacturers, Evinrude has opted for a direct-injected, two-stroke fuel system called E-Tec that relies on electro-magnetic injectors feeding cylinders sequentially under extreme high pressure, with air and exhaust flow optimized in the larger G2 (second-generation) engines up to 300-hp through a design process built on computational fluid dynamics. Sound complex? Electronically it is, but it works, and the two-stroke arrangement allows far fewer moving parts than the more complicated four-strokes of other manufacturers. In-house tests indicate superior torque, fuel economy and emissions scores througout the rpm range compared to the competition. The company also offers the Evinrude Intelligent Piloting System, an integrated steering and control system. (Look for a thorough test of a 150 E-Tec G2 on a very special skiff in CBM later this year.)

Honda was the first engine manufacturer to commit completely to cleaner four-stroke outboard technology thirty years ago, and their 90-hp and 130-hp engines led the outboard revolution in the late 1990s. Like the other Japanese manufacturers, the company has a broad stable of powerheads to draw from, ranging from single-cylinder models used for portable lawn maintenance equipment to the sophisticated V-6s that power its well-proven vans and sport utility vehicles. The company is conservative in producing new models, but they do take advantage of evolving fuel management technologies, and the 2.5- to 250-hp engines have a strong track record for durability and efficiency in both recreational and commercial duties. The 135- and 150-hp models have proven especially well-suited to 19- to 22-foot center-console fishing boats.

For 2019, Mercury offers a new line of sophisticated V-6 and V-8 four-stroke engines producing 175 to 300 horsepower. In the process, it has phased out its OptiMax direct-injected, two-stroke outboards and all but the 350 of its inline 6-cylinder, supercharged, Verado four-stroke engines. Since 2004, those Verados proved to be surprisingly durable, powerful and efficient. The new engines, however, with double overhead camshafts, compact powerheads, and significantly reduced internal friction, are extraordinarily light in weight and still possess the thrust to push the ever-larger boats being developed for them. The mid-range 4-cylinder engines of 40- to 150- hp have well-deserved reputations for power, efficiency, and durability. (Full disclosure: this writer has been running Merc 60s on his hard-working skiff since the summer of 2000. The present engine is a 2012 model with a lot of years left in it.) Meanwhile, Mercury has devoted much engineering expertise to its SmartCraft integrated electro-mechanical-hydraulic control systems, elimination of noise/vibration/harshness, and design of propellers and gearcases to help fit boaters needs precisely. The company has also worked carefully with Tohatsu, its small-engine joint-venture partner, to develop new, battery-less, fuel injection systems for its 15- to 20-hp and 25- to 30-hp models. 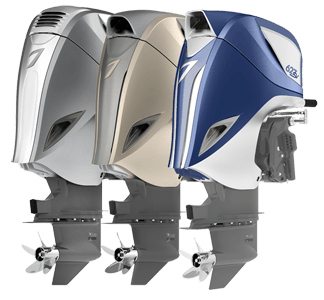 Seven Marine is a new company started by a former Mercury engineer, which amazingly incorporates a supercharged, 6.2-liter, aluminum, Cadillac V-8 block onto an outboard lower unit and transmission developed in cooperation with ZF Marine. Depending on boat size and projected speed, these 527-, 557-, and 627-hp engines (yes, really) are available with a range of lower units and 3-, 4- and 5-blade propellers, including one system with twin, contra-rotating propellers. Most often, multiple (two, three, four, or even five) Seven Marine engines power boats from 34 to 65 feet long. These are most definitely up-market rigs beyond the needs of most Chesapeake boaters, but the technology is remarkable. Look to hear more from Seven Marine, because earlier this year, Volvo Penta, headquartered in Chesapeake, Va, purchased majority ownership in the company. 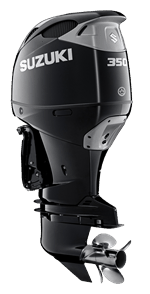 Like Honda, Suzuki has a wide range of powerheads to employ in its outboards. The company entered the U.S. market in the early ‘90s with old-style two-strokes but introduced its first four-stroke—a tough, powerful, efficient, and super-quiet fuel-injected 70-hp engine in 1997. Over the years, many of those 70s have gone into long-time service on crabbing skiffs in the lower Bay. Since then, the line has expanded to powerful 250- and 300-hp V-6s and a new 350-hp V-6 with contra-rotating propellers. The 115- and 140-hp engines have proven themselves on 19- to 22-foot boats. Suzuki was also the first manufacturer to offer smaller, 20- to 25-hp engines with battery-less fuel injection, which are much beloved by crabbers trot-lining from aluminum jonboats. In recent years, the company has increased its dealerships around the Chesapeake to provide strong service and parts availability.

Tohatsu began as a small engine manufacturer in the 1920s. It focused on outboards for commercial fishermen beginning in the 1950s and also became a leader in portable fire pumps. Today, the company manufactures light, sophisticated, four-stroke outboards up to 30 horsepower, which are solid performers on skiffs, dinghies and small RIBs. They also build a line of light but rugged, direct-injected two-strokes from 40 to 115 horsepower. The ones we have tested are remarkably fuel-efficient. In addition, Tohatsu offers highly-engineered large four-strokes from 40 to 250 horsepower. The larger engines have proven themselves especially well on boats that must work for a living. 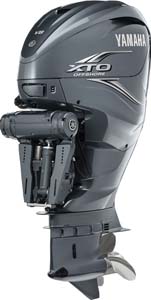 Yamaha’s outboards burst onto the U.S. market in 1984 and immediately established a strong reputation for power, reliability, and corrosion resistance, as well as continuously state-of-the-art controls and propellers. In the 1990s, the company began its transition to cleaner designs, including, for several years, a line of direct-injected two strokes, but it has been all four-stroke now for a decade. Successive generations have proved lighter, quicker, and more powerful while retaining durability and efficiency. All Yamaha’s engines are solid performers, with a new, light, 25-hp, battery-less, fuel-injected model anchoring the lower end of the line. The high-thrust 50-60-70 series, which shares some engineering genes with the Mercurys of the same power, is much beloved by commercial operators, while the 150 is one of the finest overachievers ever built. The 200- to 300-hp engines power many offshore fishing boats in single, twin, triple, and even quad configurations. For multiple-engine rigs, Yamaha offers seamless integration with digital steering and control through its sophisticated Helm Master system. The company’s new 425-hp XTO Offshore V-8 is already pushing boats up to 50 feet long. See our review of twin 425s on Grady-White’s Canyon 336 center console in last month’s issue of Chesapeake Bay Magazine.

There are serious developments to watch in both diesel and electric outboards. At the 2018’s Fort Lauderdale International Boat Show in October, British company Cox Powertrain introduced an innovative 300-hp diesel, while Germany’s Torqeedo exhibited its Deep Blue electric outboard and inboard drive systems and batteries. We’ll have reports on them later this year. Stay tuned. 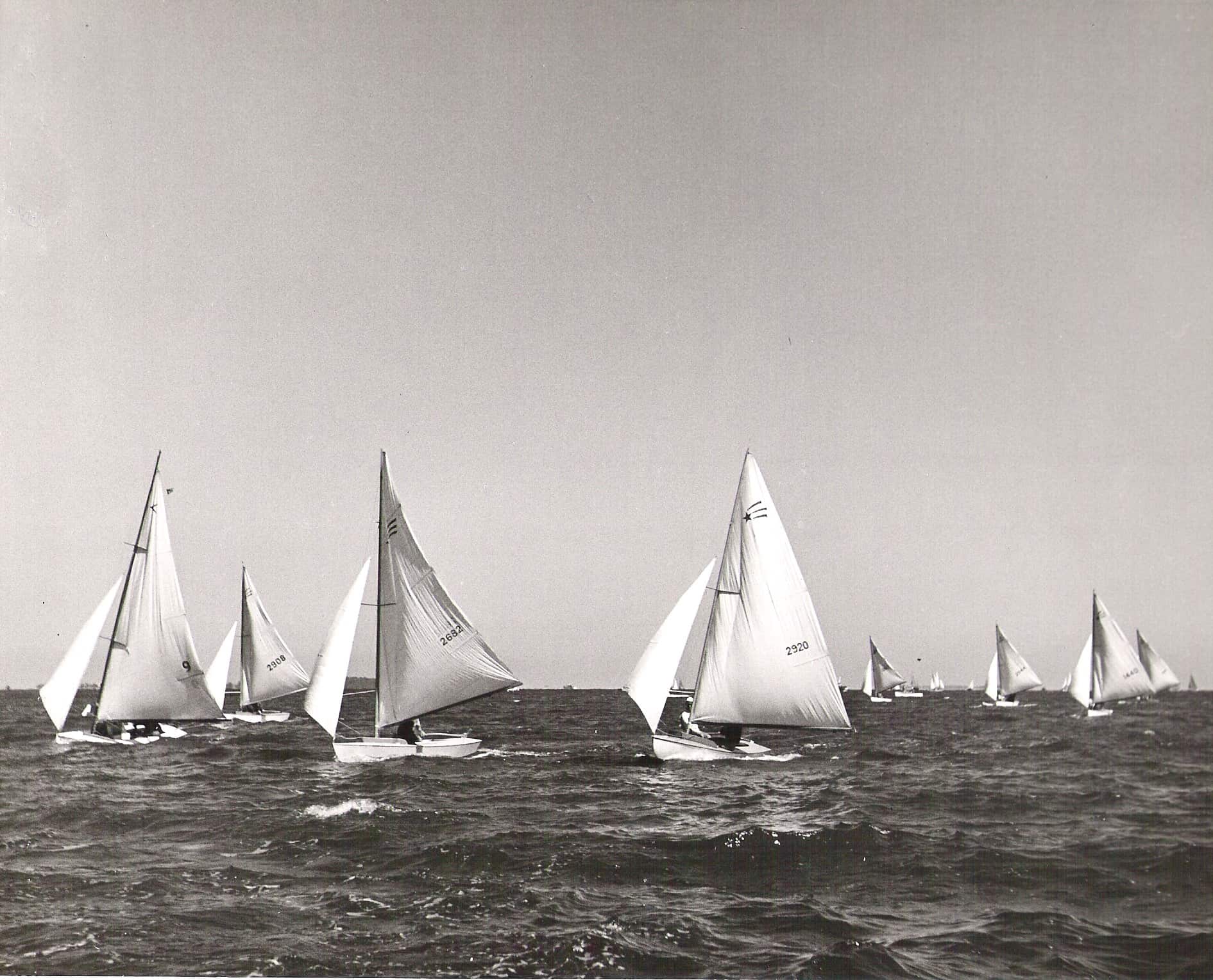 In order to fully test any charging device, the battery must be in good condition. 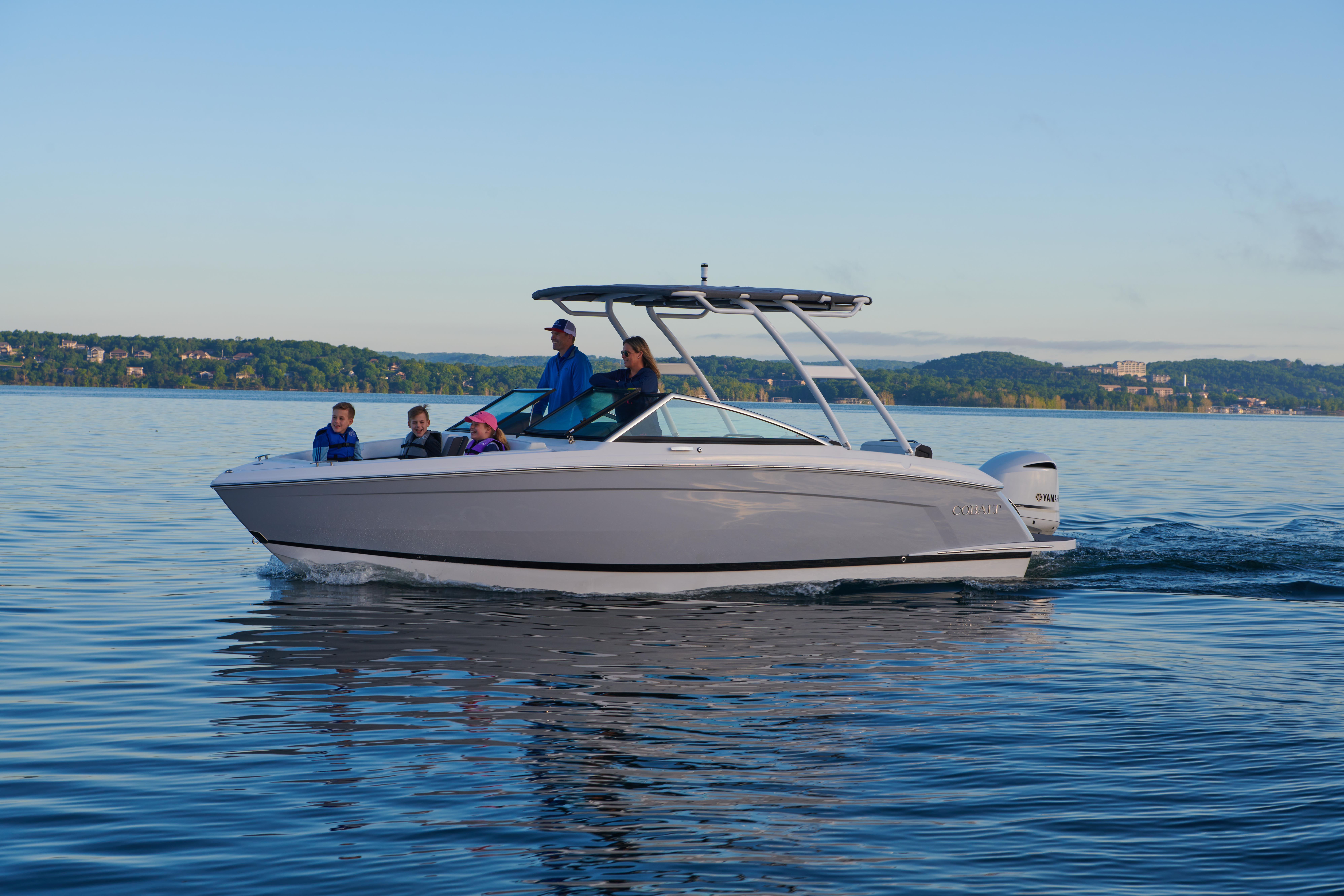 A family runabout’s first two jobs are to keep its people safe and comfortable.