The guardians of George Washington’s Mount Vernon, who have preserved the historic Virginia estate on the Potomac River since before the Civil War, are rallying against a present-day foe — one they say could mar a Potomac River view that’s been untarnished for centuries.

Across the river in Charles County, MD, not far from a shoreline that looks much as it did when Washington took in the vista, Dominion Energy is planning to build a natural gas compressor station. The company says the facility will help deliver fuel to a planned power plant nearby that’s intended to supply electricity to portions of both states — and that it will be out of sight from Mount Vernon.

An artist rendering of Dominion Energy’s proposed natural gas compressor station emission stacks, provided by George Washington’s Mount Vernon. Dominion said that the stacks it plans to build would be much shorter and not visible from a distance.

But the Mount Vernon Ladies’ Association, which claims to be first national historic preservation organization in the United States, warns that the compressor station might in fact be visible and ruin the unspoiled panorama across the Potomac from the first president’s home. The association hosted a press conference last week to raise the alarm, supported by a dozen preservation, environmental and community groups from both sides of the river.

The project is also opposed by residents who live in the wooded areas surrounding the planned facility — including more than 400 properties that are themselves barred from certain types of development because they are next to a national park that was established to protect Mount Vernon’s view.

The Charles County residents also are concerned that the compressor station’s emissions could could diminish local air quality, pose a fire or explosion risk and negatively impact the surrounding wetlands and forests. Local environmental groups are beginning to track the project, too, concerned that it could also impact local water quality.

Charles County officials denied the project a special-use permit to build on a 50-acre parcel zoned for rural conservation uses, but Dominion has sued the county. The company says a waiver from the Federal Energy Regulatory Commission overrides the county’s zoning ordinances.

Despite their environmental and safety issues, residents seem to think their best bet for stopping the project lies across the river, in the hands of the well-funded estate that has officially set its sights on stopping the station.

“Dominion Energy can move their compressor station. We can’t move Mount Vernon,” Doug Bradburn, president and CEO of George Washington’s Mount Vernon, the name of the nonprofit run by the ladies’ association, said Tuesday at a press conference on the estate’s lawn.

The crux of the conflict with Mount Vernon comes down to the height of two exhaust stacks that would emit carbon monoxide and potentially ozone-forming gases that are byproducts of the power-generating turbines burning natural gas. The higher the stacks, the more likely they are to be visible at Mount Vernon. But stacks that are too low could deliver more air pollutants to the communities and forested areas surrounding the site on the Maryland side.

Dominion spokesman Karl Neddenien said neither the Charles Station compressor’s buildings nor its emissions stacks would be visible from Mount Vernon, pointing to a sightline study conducted by the Chesapeake Conservancy that found 50-foot stacks would be hidden behind a bluff of trees.

But Mount Vernon advocates say those plans could change, and they note that a far taller stack height of more than 113 feet is mentioned as a “best practice” in permitting documents. The facility’s air quality permit is currently being reviewed by the Maryland Department of the Environment, which could have a say in the height of the stacks.

Uncertainties about the height of the stacks is one of the reasons the Chesapeake Conservancy, after completing the sightline study for Mount Vernon, joined the effort to oppose it.

“Higher stacks would lessen the local air quality impacts, but would likely negatively affect the historic view,” said Susan Shingledecker, vice president and director of programs for the Chesapeake Conservancy. “Lower stacks would remain shielded by tree canopy, but could mean increased harmful environmental health conditions for surrounding communities. This is not a tradeoff we can accept.”

Preservation advocates also fear the construction could lead to more industrial development in a portion of Maryland they’ve worked hard to keep forested.

“Their promises to us are not binding,” Bradburn said. “They cannot guarantee that the industrial development will not have a long-term negative impact on the forest canopy that protects that view.”

A dozen organizations from both sides of the river — including the Chesapeake Conservancy, the Alice Ferguson Foundation and groups representing Maryland residents near the planned facility — have joined the campaign to “Save George Washington’s View.”

Also last week, the National Trust for Historic Preservation added the Mount Vernon estate and Piscataway Park to its annual list of the most endangered historic places in the United States, along with Annapolis’ City Dock, a move intended to galvanize national support for ongoing preservation.

Behind the effort is the educational and fund-raising prowess of the Mount Vernon Ladies’ group, a nonprofit that raises almost $50 million annually to manage the estate’s $250 million in assets, according to Charity Navigator.

Sarah Miller Coulson, regent of the Ladies’ Association, which has maintained Mount Vernon for 160 years, said the group’s members considers it their “sacred and moral responsibility” to protect Washington’s home, tomb and viewshed from projects like the one Dominion has planned. And they have a record of doing so.

In the 1950s, the organization stopped an oil refining company from buying hundreds of acres across the river in Maryland. A decade later, the Washington Suburban Sanitary Commission planned to use eminent domain to build a three-story sewage treatment plant across from Mount Vernon, intending to soften the blow to the view by making the plant a replica of the estate. A congresswoman who was also a member of the Ladies’ Association helped redirect those plans.

“We won’t stop until we’re successful,” Coulson said of their latest campaign.

At Mount Vernon, efforts to protect the property’s view culminated in the 1960s with the creation of Piscataway Park on the banks of the Potomac in Maryland. The group also had a hand in hundreds of conservation agreements with landowners that limit the height of buildings and how many trees can be removed.

Piscataway “was the first park in the nation created to protect the viewshed” of another property, said Lori Arguelles, president and CEO of the Alice Ferguson Foundation, an environmental nonprofit based across the river from Mount Vernon in Accokeek, MD. Dominion’s compressor station would be within 50 feet of the park.

Dominion officials say environmental concerns about the project will be addressed through the local and state permitting process, which is underway now. Dominion has been expanding its network of energy infrastructure across the region with a growing focus on natural gas as an alternative to burning coal for power. Dominion says the Charles County compressor station would connect to existing underground pipelines to pump new natural gas supplies to the Panda Mattawoman Energy Project, which is planned to be built in Prince George’s County, MD.

The compressor station is part of a project that Dominion says on its website “will bring much-needed new natural gas supplies” to the region that includes Charles County, MD, and Mount Vernon, which Bradburn said is heated by a mix of electricity and natural gas.

Dominion has won at least one other battle over whether it can place energy infrastructure within sight of historic properties. On a portion of the James River near Williamsburg, an effort last summer fell short in protecting a trio of historic sites from the view of a power line spanning the river. Despite opposition from historic preservation groups — that portion of the river landed on the National Trust for Historic Preservation’s list of endangered places in 2013 — the project received final federal approval. Lawsuits from preservation groups are pending.

Coulson said the Ladies’ Association had been meeting with Dominion officials as recently as the day before the press conference and wants to help the utility find an alternative location for the compressor station.

But Dominion’s Neddenien seemed befuddled by the press conference at Mount Vernon and the rallying cry to stop the project.

“We have worked with Mount Vernon officials si nce the initial stages of planning for this project about two years ago. We designed our facility to minimize visuals at Mount Vernon,” he said.

For Mount Vernon, those visuals are of paramount importance to their mission of preserving the estate and its historic vista. Several U.S. presidents are among the more than 87 million people that have visited Mount Vernon over the years, the most recent being President and First Lady Trump.

Bradburn stood with the Trumps on Mount Vernon’s piazza during the April visit of French President Emmanuel Macron — and brought up with Trump the risk of a pair of exhaust stacks appearing on the horizon.

“The president said, ‘This should be preserved. This is fantastic,’” Bradburn said. 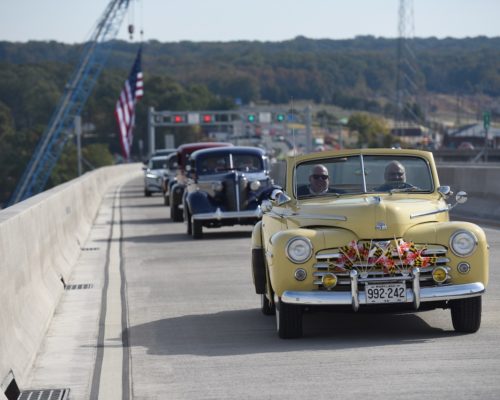 The $463 million Nice Bridge replacement over the Potomac River is officially open, as droves 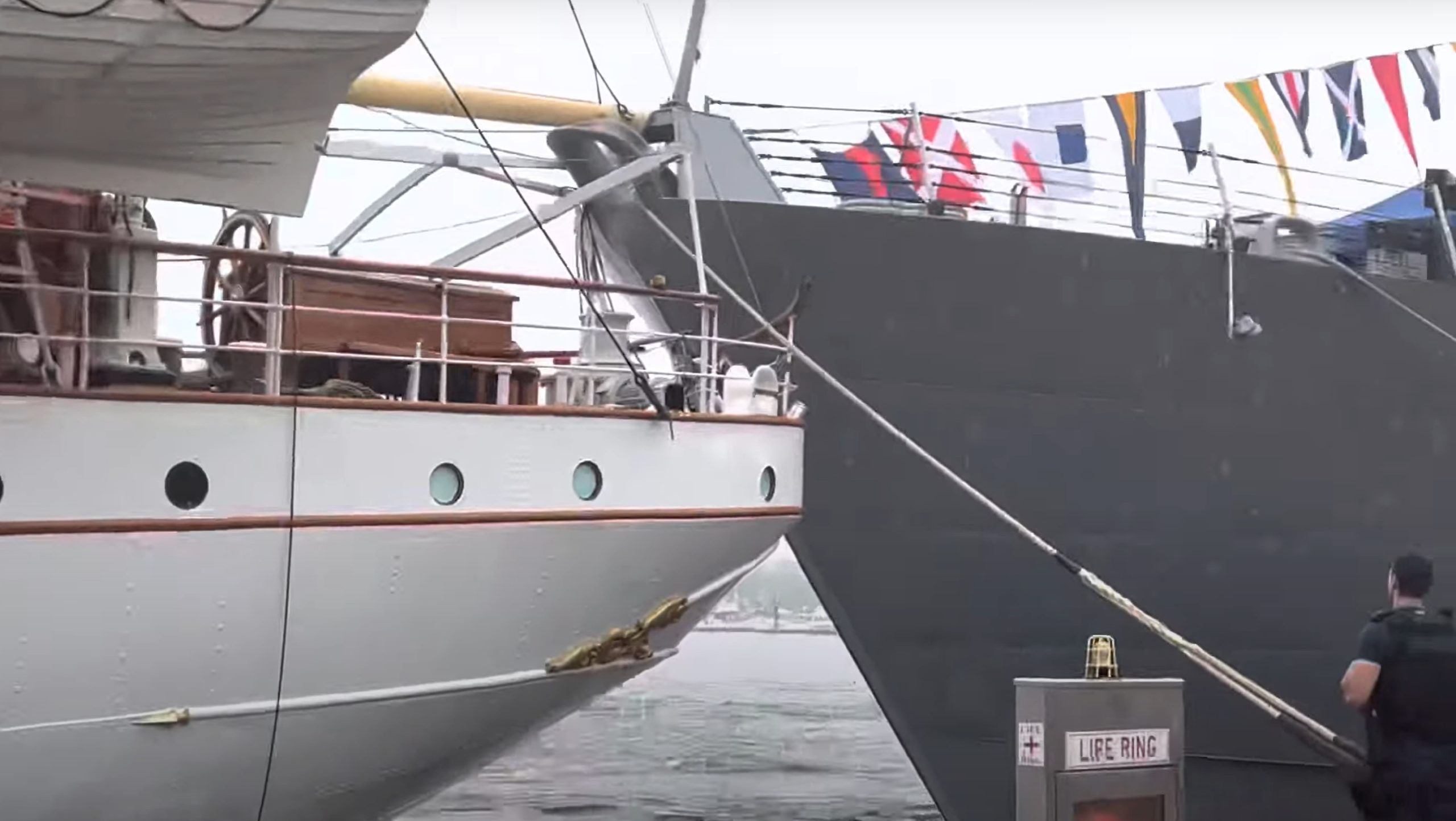