The state of Virginia has officially dedicated its 40th state park, a history-rich Native American site overlooking the York River and its tidal creeks, which offers education as well as trail and water access.

The new state park in Gloucester County is called Machicomoco, the Algonquin word for “special meeting place”, and seeks to teach visitors about the indigenous people who lived on the shorelines of the York, also known by its Indian name of the Pamunkey River. It includes two miles of wooded interpretive trails that shed light on life hundreds of years before the arrival of Europeans and an open-air interpretive area that will be the future home of educational programs.

“It is our hope that visiting the park will spark an ember of curiosity, leading those who visit here to seek more knowledge about the history of the people who walked these lands and a deeper understanding of their culture, which lives today through their descendants,” said Virginia State Parks Director Dr. Melissa Baker.

Surrounded by water on three sides, Machicomoco State Park is intended as both a launch point and a boating destination. The park includes a launch for small watercraft and a floating dock for boats to tie up. Three miles of paved trails offer walking and biking.

Stephen R. Adkins, Chief of the Chickahominy, spoke on behalf of the 11 tribes, saying he is proud the park has become a reality. “This is a giant step in our quest to ransom our history … a history that has been held hostage for so many years.”

Given its rich historical nature, the park was developed using low-impact methods and with archaeologists on hand. Virginia Department of Conservation and Recreation Director Clyde Cristman said numerous artifacts were found during the park’s construction. The site originally chosen for the kayak launch turned out to be a launch site used by people hundreds of years earlier, too—so the modern day launch was moved to protect its history, Cristman said.

Virginia State Parks says Camping and yurts will be available beginning May 10, and reservations open to the public on April 19 at 10 a.m.

It’s a holiday gift for Bay restoration projects, as 104 new grants are awarded for 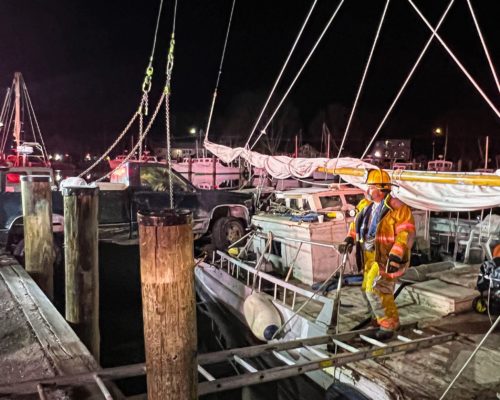