Curtis Bay is an enduring industrial colossus at the far southern tip of Baltimore, just a chemical cloud away from the Anne Arundel County line. You won’t find a lot of sailboats there, but many a wreck lies along the waterfront shoals where ships were sent to die.

Settled high upon a hill that slopes down to Curtis Creek, the area was once the nearly-hundred-acre farm of a prosperous, formerly enslaved man named William Hall. The early homes—on streets named alphabetically for trees—were surrounded by woods with soil rich enough to harvest mushrooms.

The Coast Guard yard, synonymous with the neighborhood for more than a century, was established on Hawkins Point Road in 1899 on 36 acres sold by Hall to the government.

With the American Century came heavy industry: shipyards, chemical plants, mountains of coal serviced by the B&O Railroad, foundries, and jobs, jobs, jobs—the deep water to which the neighborhood owed its prosperity becoming thick enough with oil and grease to catch fire.

Patriotism was unquestioned and the athletic club fielded baseball and football teams that held their own against other ethnic villages throughout the city.

For some time now—who knows when the good old days cross over to ain’t it a shame?—the fabled community has been an object of nostalgia and mourning by those born there between the Great Depression and the New Frontier.

“Some parts aren’t so good anymore, but I live at the end of a dead-end street behind the church and I have good neighbors,” said Jeanne Stumpf Zaruba, born in October 1933, the month the Coast Guard was auctioning patrol boats—relics of the First World War—to the public.

The year before Mrs. Zaruba was born, the neighborhood’s most dramatic landmark went up: a water tank at Filbert and Prudence, skirted with colored gravel and bricks of 20 different colors that fade to a herringbone of light tan around the top.

The work of a Baltimore architect and bibliophile named Frank O. Heyder (who also worked on Memorial Stadium before it opened for the 1954 baseball season), it is spectacular.

At 86, Jeanne is the last survivor of her generation of Zarubas, an esteemed family of old Curtis Bay who for years have held a reunion each fall at the Coast Guard Yard. She is the only member who still lives in the neighborhood despite having to move in with her daughter outside of the city during the 2020 pandemic.

Jeanne’s husband, Edward J. Zaruba Sr., was a naval architect, one of seven siblings born to immigrant Czechs Karel and Anastasia Zaruba and “descended from a long line of Curtis Bay shipbuilders,” according to his 1996 obituary. His career began at the Coast Guard Yard in 1943 as an apprentice shipbuilder.

In Curtis Bay, if you were related to the right people—or had someone from the neighborhood or its many churches put in a good word for you—a job at one of the three-shifts-a-day plants was within reach.

And if you were a Zaruba or a Hajek—the old names ring out like a jumping wedding polka: Obalinsky, Konopik, Chermak and a score of others who lived on the hill high above the harbor—you shopped at Curtis Bay Variety. The emphasis was on variety.

There, once upon a Christmas, a gleaming red metal fire truck waited for Santa to deliver it to a lucky kid in the everybody-knew-everybody enclave of Czechs/Bohemians, Ukranians, Lithuanians, and Poles, with a few “American” families sprinkled in.

“My mother’s parents owned the store and we lived over top of it for many years. I remember we’d all make breakfast together and I remember when we had to empty the place of everything but the shelves,” said Jeanne’s niece, Joan Zaruba White, 71 and now living in Pasadena.

Joan hated leaving Curtis Bay around the 7th grade when her parents, William G. Zaruba and the former Norma Hajek, both now deceased, moved to Linthicum in the 1960s. The lure of the postwar suburbs, then as fresh as the rye bread baked by a petite, wiry Ukranian woman named “Miss Ann,” began to empty Curtis Bay of its legacy families.

“I stopped driving through the neighborhood,” said Joan. “It’s  too sad.”

The store, owned by Norma’s father Frank and his wife, the former Cecilia Puncochar, stocked everything but groceries—knitting yarn, garden hoses, candy, dry goods, what-nots and seven kinds of what-have-you. The family kept house next door and the number to call to see if your vegetable seeds had come in was Elgin 5-8892.

Frank C. Hajek, Jr., who died in 1980 a few years after his wife, is remembered as a kind and dignified man who wore a white shirt, tie, and black dress shoes even on vacation. While Cecilia minded the store, Frank was usually in the basement of the family home next door, running off calendars, church bulletins, fliers for bull roasts, and marriage announcements on an old press beneath the staircase.

“We would help him hang the [printed] paper to dry; it was all over the house and we loved helping,” said Joan. “He had all his type lined up on a little table next to the press.”

“Good years,” she said, as only a senior citizen remembering her grandparents can. “Happy times.”

How much has changed in Curtis Bay since Frank Hajek was running off posters for a crab feast at the Polish Home Hall high upon the corner Fairhaven and Filbert?

Since 2015, the century-old Polish Home has been the sanctuary of Fair Havens A.M.E. Church, a vibrant African-American congregation in what was once an almost monolithically white neighborhood.

Near the corner of Pennington and Church is a nonprofit, female-run organization called “The Well,” which ministers to women—some of them sex workers, many of them addicts—who want another chance.

The mission of the Well, according to its website, is to offer practical guidance and healing to “women who have survived lives of abuse, generational poverty, sexual exploitation and addiction [and] know what it is to be broken.”

The Well has been in business for about 15 years. St. Athanasius, where Mass was once said in Polish, pre-dates the Coast Guard Yard by nearly a decade. According to the gospels, they are in the same business.

“Saint Athanasius remains a steady jewel in the midst of a community that has seen a constant flow of change over the years,” said the Rev. Rob DiMattei, pastor. “Our parishioners are very generous in their outreach,” including donations to the Well.

Though it wasn’t a toy store, if Curtis Bay Variety stocked a fire engine at Christmas, surely one might find a novelty ship or boat there when the holidays came around.

And while everyone knows that the Coast Guard has boats, the average person might be surprised that the Army also has vessels and kept tugboats at their depot near the U.S. Gypsum pier on Hawkins Point Road.

“I was a deckhand down there during Vietnam, ’69 to ’75,” said George  Viehmeyer, Jr., 70, a Linthicum native now living in Pennsylvania.  “We’d tow a barge to Edgewood Arsenal [in Aberdeen] to pick up a load of whatever and take it down the East Coast  to Panama. Then we’d sail back  to Baltimore.”

The tug was the LT-1971 and carried a crew of seventeen. It is believed to now be in private service in Alaska.

Asked what it was like to work on an ocean-going Army tug during wartime, Viehmeyer said, “When we weren’t on duty, we’d sail over to Pratt Street, tie up at Connolly’s and carouse there for an afternoon. It sure beat being in the infantry.”

Of Curtis Bay in the mid-1970s, when one of George’s relatives was making a good living at Pennington and Plum selling thousands of used and blemished tires, Viehmeyer said, “It was already becoming a rough area.”

Rafael Alvarez can be reached via patreon.com/rafaelalvarezbaltimore. 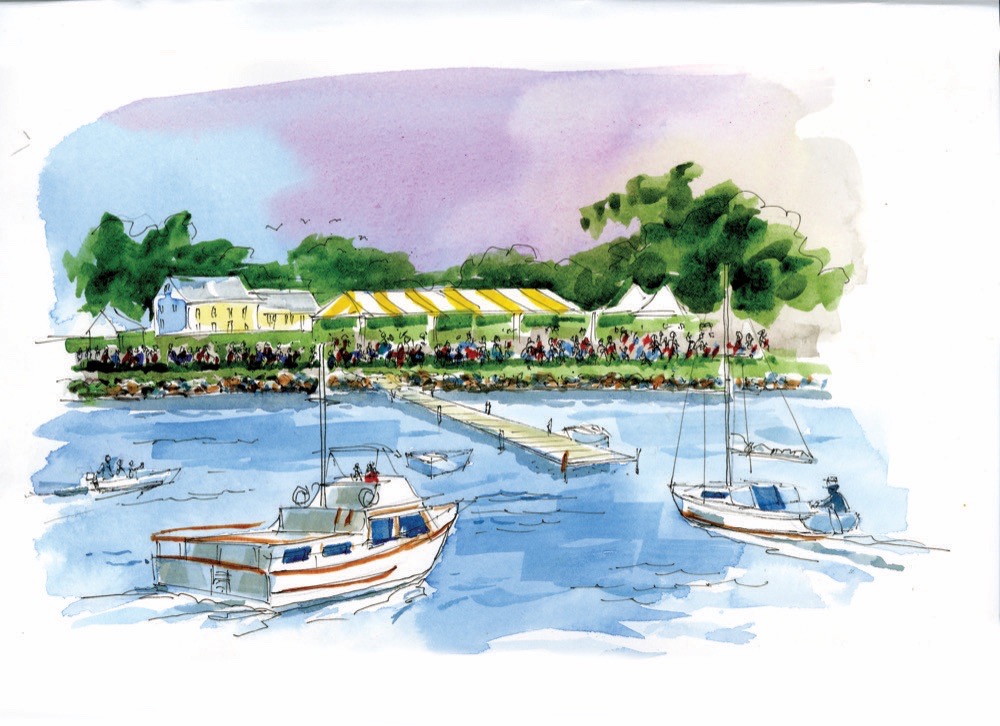 Once Upon Our Time

Fifty years in, we look back at Bay boating’s big picture.

By Tom Dove A successful sailboat designer is comprised of curiosity, art, skill with materials,

Enslaved people in the Chesapeake region found an unlikely ally in the struggle against slavery: the British.