We entered our sixth salt-making season on a crisp April day, loading three pristine coolers, a wire bushel basket, and a set of 12-foot oyster tongs into a home-built, 17-foot skiff launched from the ramp at Red Bank, a tiny shell-fishing hamlet between Nassawadox and Machipongo on Hog Island Bay.

Local metal artist Buck Doughty and I got to talking about the possibility of making our own salt about five years ago. We researched the tradition going back to the 1600s, commandeered Doughty’s 20-gallon, cast-iron, black-duck-and-dumplings cauldron, and decided to give salt-making a try. We figured it shouldn’t be more complicated than just boiling fresh seawater. We were only slightly wrong about that.

Without salt, our colonial ancestors faced illness or starvation. Valuable meat would rot before it could be eaten, and the abundant piscine bounty of the Bay could not be stored in white oak barrels for winter. When word came in 1613 that Virginia’s barrier islands, not far from Jamestown, offered ideal salt-making conditions, Governor Thomas Dale dispatched twenty men to live on what is now called Old Plantation Creek to establish a saltworks on Smith Island to supply the struggling colony with the indispensable mineral.

That effort and subsequent monopolies and government bounties ultimately couldn’t keep up with the burgeoning colony’s needs, but salt-making was never entirely forgotten on the Eastern Shore.

The first time we made salt, we thought it didn’t work. We boiled all weekend, and by Sunday night, we had about five gallons of water left from the original 30 gallons, but no salt.  We split the water and took it home. The next day, independently, we boiled what we had and suddenly, salt started precipitating out. It’s a pretty cool natural phenomenon. The water finally becomes over-saturated and salt starts to fall to the bottom. We each collected about a half-gallon of Eastern Shore salt, and we were hooked. Since then, we have experimented and refined the process by heating and cooling the water and skimming the large crystals (fleur de sel) off the top of the pot.  We still have a lot to learn, but we have been making perfectly good salt from the very beginning.

Conditions here are ideal for recreational salt-making. Thanks to the proactive efforts of the Nature Conservancy and others to acquire and forever protect these barrier islands, the waters remain some of the cleanest on the Atlantic seaboard. Abundant stands of hickory, cherry, pine, and oak grow close to the shorelines and buffer the undeveloped land. The scene that unfolds before intrepid adventurers is as wild and untouched as Governor Dale’s salt-boilers would have experienced in the early 1600s. There is not a boat or building in sight. Black ducks and buffleheads fly overhead in twos and threes, and shorebirds collect along their historical breeding grounds from the mouth of the Bay to the northern tip of Assateague.

We steer our skiff into Hog Island Bay toward a spot known locally as “The Deeps.”  Hog Island is visible across the increasingly choppy water to the east, and just south is Smith Island where Governor Dale’s men made salt for the colony over 400 years ago. Away from the protection of the marsh, the early spring breeze whips up small white caps, and we waste no time in dipping about 25 gallons of saltwater into the coolers before swinging the small skiff back into the relative calm of the creek.  We glide up to a mudbank, and Doughty begins to sound the bottom with the hand-tongs for that hollow thud of iron hitting live oyster shell. Fresh oysters have become an essential part of our saltwater boiling process. And beer.

We fill the wire basket to about half with fat, legal-sized oysters, and cruise back to the ramp and home to let the water in the coolers settle overnight.

The next morning, we build a wood fire underneath the cauldron, which hangs by a chain from a tripod of stout saplings. The pot weighs about 100 pounds and takes two to wrestle into place. We’re unsure of the pot’s provenance, but it was probably used for clarifying lard, making apple butter or even salt, back when. We pour in seawater and settle down and open beers for a long wait. After about 20 minutes, steam begins to rise.

We talk about marsh-hen hunting and the relative qualities of sea-side versus bay-side oysters; the clam house we share needs some repair, and there’s always the weather to discuss. We add more water and open fresh beers. This is a partnership. Neither of us would contemplate making salt alone.

Around noon our wives appear with offspring, a puppy, cheeses and a bottle of Vintner’s Blend from Chatham Vineyards on Church Creek near Machipongo. Excellent stuff.

We put a round of oysters on a grate over the fire. The teenagers take over the cooking duty and pass roasted oysters around as they become available. For a time, standing around a fire is more appealing to them than screen-time indoors. Everyone is laughing and cooing over the new dog.

As the oysters become just a pile of shells, and with the wine bottle empty, the families disperse toward other weekend activities, leaving the ESVA salt-men alone to tend the fire, add water and trade stories. The stars fill a black sky and the water has reduced to about three gallons of strong brine. This is a small batch. Boiling sometimes goes on for two days with periodic middle-of-the-night wake-up calls to add wood and stoke the fire.

We split the brine and take our shares home to finish on kitchen stoves by skimming the large crystals. The result is several pounds of fresh, white sea salt with a slight smoky scent. Crunchy and bright, this is a fine table salt. The salt that falls to the bottom of the pot is finer and rounder. This goes into quart Mason jars for general cooking use.

We love this salt for its flavor and because it reminds us where we are, which defines who we are—people content in a skiff in the marsh, tonging oysters, making salt, and spending time together on Virginia’s beautiful Eastern Shore.

Robert Gustafson is an eastern-shoreman by way of Chicago, Harvard, and a career on Capitol Hill. He lives near Exmore, Va., where he coaches the Broadwater Academy track and cross-country teams.

LIVING As readers of Chesapeake Bay Magazine know, the Bay offers the best things to 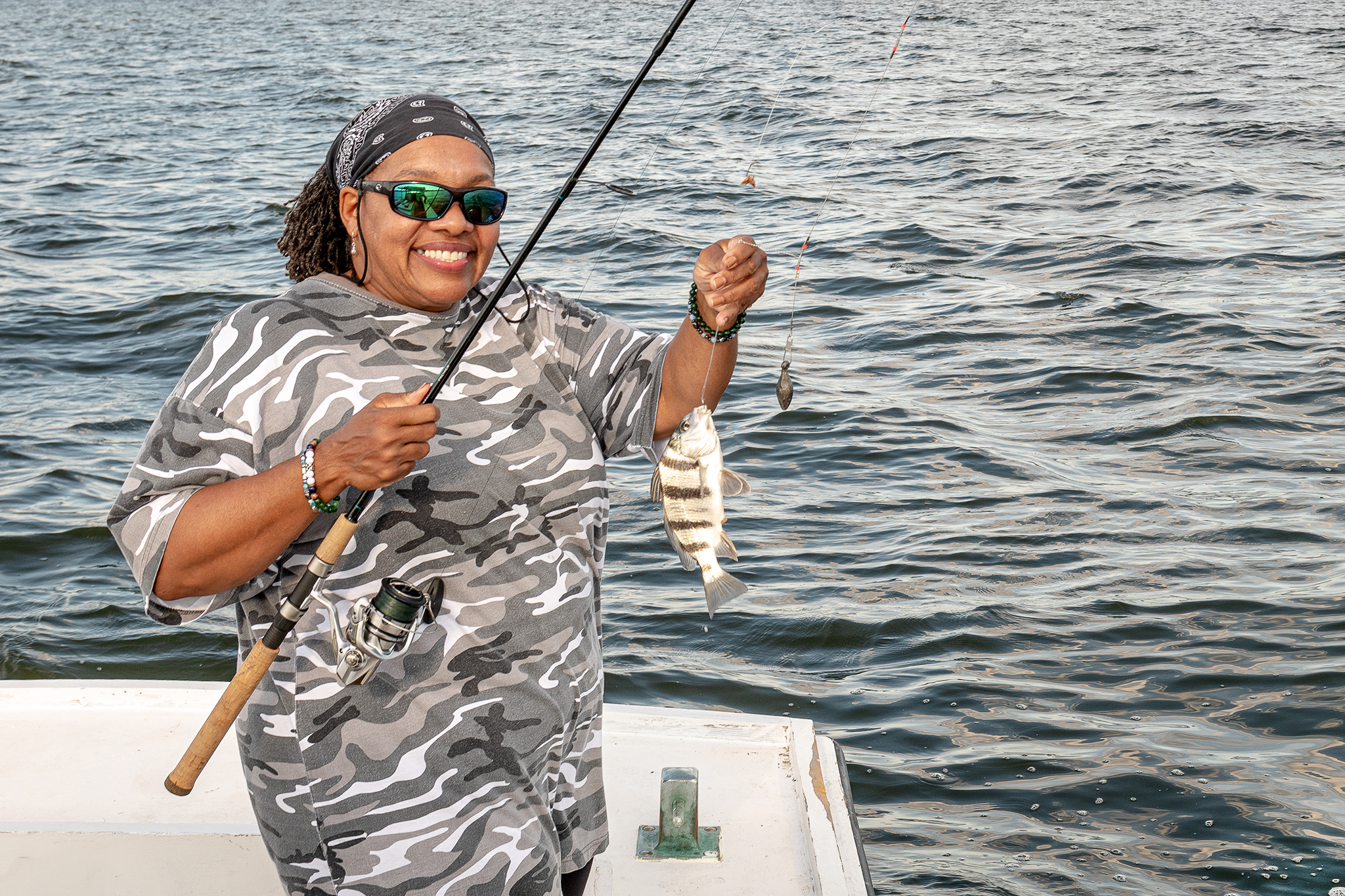 Hooking a Live One

Best Places to Retire by the Bay

Looking to settle down on the Bay? Here are a dozen places to check out.