When the phone rings at Howard Percival Johnson Jr.’s house, somebody with an orphaned wooden runabout, a classic cruising powerboat, or a vintage automobile might be on the line. If you’re a guy like Johnson, your heart sinks a little every time you hear about one of these treasures in need of repair or salvation. If you’re Howard Johnson, you want to take it home and restore it back to life. Because you love these boats so much, you want to share them.

That’s how you end up living at Old Time World, a one-of-a-kind compound spread over seven acres near Upper Marlboro, Maryland. With his wife Cheryl, he collects, refinishes, and deals in relics from his favorite moment in time—post-World War II recreational boats and the cars of his childhood.

Five buildings of varying size and overlapping purpose are scattered across the property and house about 100 boats and 37 vintage cars from the ’40s, ’50s and ’60s. The Arena, The Workshop, The Cheryl Shop, The Museum, and The Shed feature workbenches, as well as Whirlwind skiffs, Chris-Craft cruisers, and rows of Chryslers, Buicks, and Chevys.

“He probably has the largest classic boat collection I know of,” says John Into, former president of the Antique and Classic Boat Society’s Chesapeake Chapter. “He’s just trying to save them all, and it’s not an easy thing to do.

“The love people have for these boats, it’s kind of hard to describe. It’s a passion. Howard’s dedication is probably as great as it gets.”

Raised an only child, Johnson’s fond memories of exploring the Severn River and the Chesapeake Bay with his parents, first aboard a 22-foot Maine-built lapstrake day boat, then aboard a 32-foot 1929 American Car & Foundry (ACF) Sport Cruiser called The Leda, anchor his lifelong devotion.

With their sleek lines and mahogany planks and trim, these are examples of individual craftsmanship and design from around the country, says Johnson, 74. After all, it’s been nearly 60 years since mass-produced wooden boats were replaced by fiberglass.

“And they’re family-related. Almost every single boat came from an individual family to begin with. These are a piece of the country’s history,” he says. “So, it’s about the stories.”

Johnson’s father ran a large truck repair business in Baltimore and knew his way around an engine. His mother refinished furniture. Johnson worked alongside both of them from a young age. The first boat Johnson ever refinished was during his childhood, a 12-foot rowboat with a 5½-horsepower engine and a canvas cover he made with his mom. The first boat he fell in love with was a Whirlwind.

“They were the size a child could manage,” he says.

The infatuation continued. “It is fast, light, easy to handle and puts you right next to the water for a thrilling ride,” says Johnson.

He so loves the cheerful runabouts that he authored Wild About Whirlwinds, a self-published book you can buy on his website.

Thirty Whirlwinds are located around the property and several are stacked along one side of Old Time World’s largest building, called The Arena.  The deck on one boat, under restoration, is currently held in place by 140 clamps; three others were restored over recent winters. Built in Cockeysville up until 1962, Whirlwinds emerged from Allied Aviation, a company that started out making molded plywood gliders for combat in World War II, then, after the war orders dried up, the company shifted the unique building techniques to boat production. “The Navy decided the gliders were too dangerous to use,” says Johnson. “The hulls were molded out of mahogany veneer.”

Tim DiGennaro met Johnson years ago over one of the 14-foot runabouts.

“I grew up on the Chesapeake Bay and had a Whirlwind when I was a younger man, and I wanted another one,” says DiGennaro, an antique motor mechanic. “I heard he was selling them, so I went to Upper Marlboro to purchase one.

“We both like nostalgia. Old cars, old boats, old airplanes. You name it.”

Just this winter, the two buddies were collaborating. DiGennaro had passed along a 1976, 85-horsepower Mercury some years back.

“I said, ‘Hey, you need to put this on a boat.’ Six or seven years later, he comes up with the boat—a wooden lapstrake Lyman, early ‘60s vintage. We brought the motor to my shop and I replaced the carburetor, fuel pump, hoses, wiring,  and water pump. I took it up to his  shop and we rigged it on the boat,” DiGennaro recalls.

“It runs great on a hose,” DiGennaro laughs. “We’ll see in the spring how it runs in the water.”

Something like 150 outboards reside in Johnson’s workshop or around the property. Twelve orphaned outboard cowlings sit across from one of Johnson’s five workbenches, which are testaments to his careful attention to detail, organization, and craft. Endless rows of labeled drawers hold cabinet latches, molly bolts, rubber grommets. “Look at these nails from England,” he says. “They’re pin nails, made of galvanized steel. I got them in Bermuda. Not an easy thing to come by.”

“We’re just trying to keep the past alive,” he says.

In addition to working on boats, Johnson started repairing cars in Severna Park when he was in high school. In the 1960s, he restored the old clock in the Chase-Lloyd House on Maryland Avenue in Annapolis. Eventually, he became the self-styled Antique Doctor, devoted to refinishing antique furniture. Then the boats and cars elbowed in. He moved to his spread, a former tobacco farm, in the 1980s.

The buildings at Old Time World came along as circumstances required.

The Cheryl Shop houses Cheryl’s workbench. “My father taught me to be a mechanic,” she says. It was built with money Johnson earned restoring a Chris-Craft.

The Arena was built over the course of two years, after a guy called up Johnson one day and said, “Hey–want some trusses?” Johnson spent a winter welding the trusses into a grid. Five guys spent a Sunday putting up the 60-by-160-foot sheet metal roof. The next day, Johnson got a call from the Alexandria Seaport Foundation.

“They said, ‘We have a cruiser. Would you like it?’ I went down to Fort Washington; it was a wonderful vessel and I had to get it under a roof. It had been owned by a family in Annapolis who donated it. A 1940 Chris-Craft, 33 feet, in original condition.”

The Chris-Craft is one of seven cruisers here, all accessible via planked steps and ladders so you can climb aboard.

There’s also the 1948 Owens, (built in Annapolis and later Dundalk, Maryland), a 42-footer that sank in the Middle River. The boatyard where it lived raised it and helped pay to bring it to Old Time World. Today, strung with festive colored lights, you can hang out and enjoy its three-stateroom comfort and perfectly restored mahogany. As a young man, Johnson knew Charles Owens, an owner of the company, and occasionally did work on his personal yacht.

Old Time World’s other two buildings come with their own distinct personalities.

The Museum is a 40-by-100-foot monument to post-war pop culture. The shelves and tables feature antique radios such as a Zenith Philco, an RCA Victor, and a GE transistor in its own leather carrying case. On the classic jukebox you’ll find Jackie Wilson, Jerry Lee Lewis, Del Shannon. Boats and cars pack the place, including a spectacular 1947 Ventnor race boat, Hurry Home, which for a while served as the mascot for the Chesapeake Chapter of the Antique and Classic Boat Society (ACBS).

“It was a test boat that wasn’t successful,” says Johnson. “It lived in an upstate (New York) barn where a friend found it.”

In this Shed stand six cars, including a 1948 Dodge with 17,000 miles on it, identical to the one Johnson had in high school. Until recently, the car collection included a breakout star: a Packard that’s now central the Baltimore Museum of Industry’s permanent Fueling the Automobile Age exhibit, which opened in 2018.

The car was modified for exhibition purposes by the exhibit’s fabricator, says Jane Woltereck, the BMI’s Director of Collections & Exhibitions. Painted pale green, its driver’s side door is modified to stay permanently open and its trunk is cabled shut.

“Howard was very generous in offering the car at a very low price that fit our fabrication budget,” she said.

“It’s an unusual design–the bow is so pointed, but there’s this twist in the hull and again at the stern. The bottom is flat. It would be hard to steer. We’re not going to race it;  we’re just going to finish it and run  it around.”

The mystery, by the way, has since been solved: it’s a needle-nosed race boat used by American Powerboat Association members back in the ‘60s.

On deck for this restoration are Cheryl’s 10-year-old twin granddaughters Allison and Madison, who have already scraped off the finish. Johnson will add a keel. He’s also planning to add strakes to throw water off the stern, instead of into the boat.

“The twins are helping rehab the boat,” Johnson says. “My father taught me to work, and we’ll help them along. Maybe we can take it to the Antique and Classic Boat Show in St. Michaels over Father’s Day weekend.”

Their mother, Meagan Wharton, sees the twins finding a new love for boats. The race boat is the first one “they’ve actually put elbow grease into.”

It’s a lesson worth learning.

Allison Blake’s credits include National Geographic Traveler, The Washington Post, The Boston Globe, and Baltimore Magazine. She is the author of The Chesapeake Bay Book  and Maryland Curiosities. 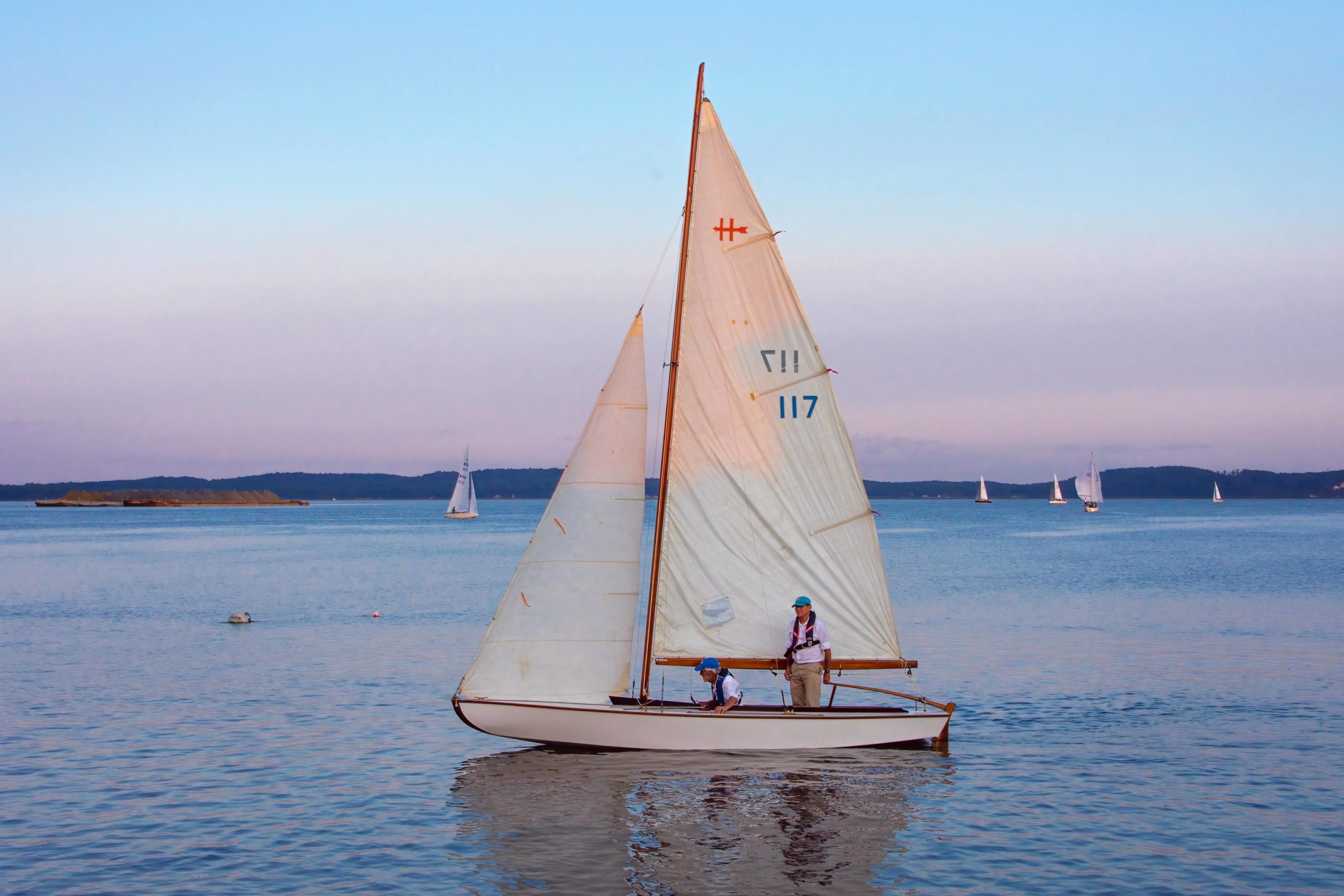 Sailboat racing in the Upper Bay has come a long way. By Susan Moynihan Drive

Gem of the Nanticoke

Like fishermen with their favorite fishing holes, Vienna, Md., gives boaters a special place on Maryland’s Eastern Shore to call their own. 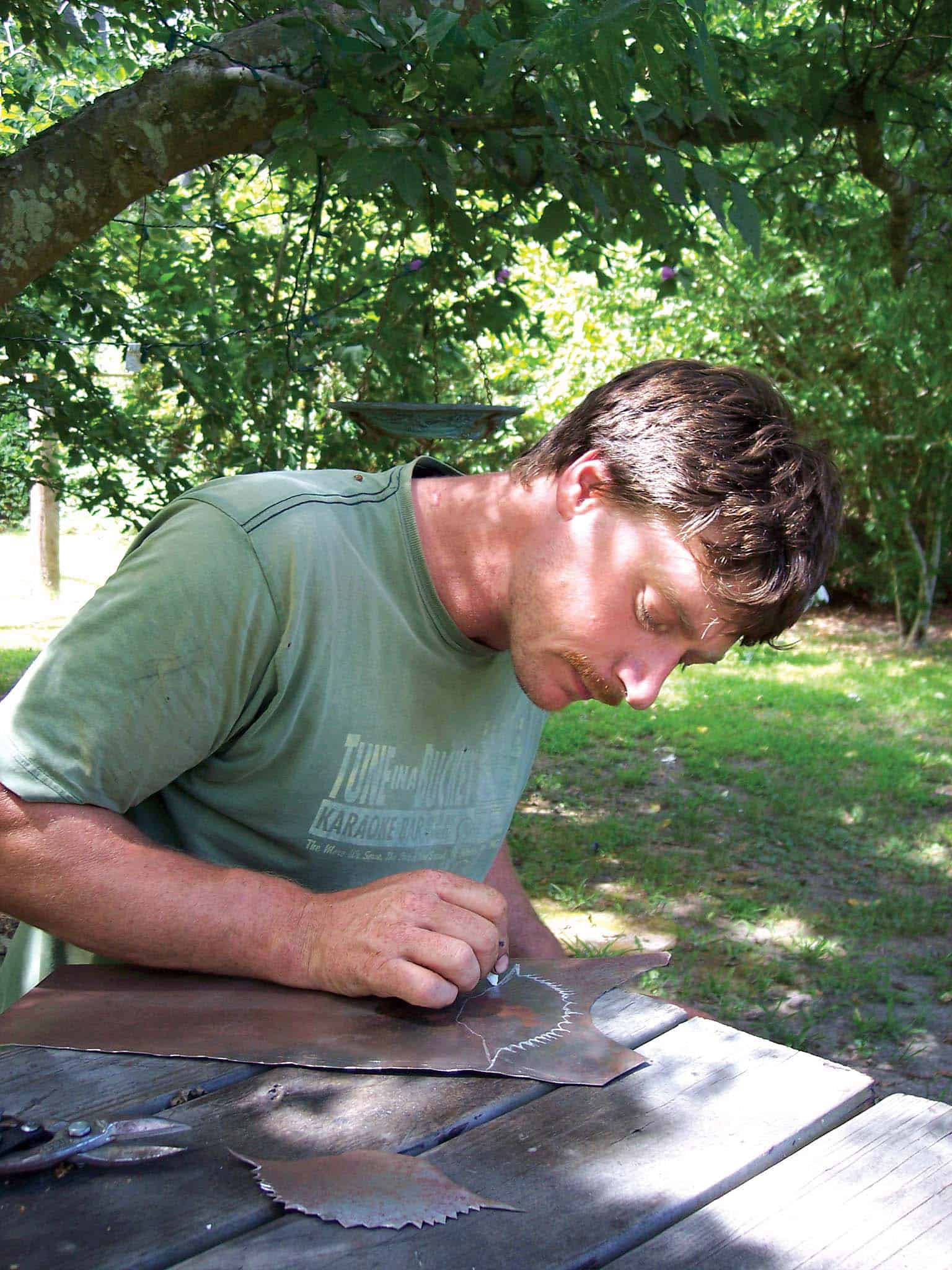