Ryan Hoover teaches sculpture making at the Maryland Institute College of Art. So, why is he developing a product that could help oysters grow in the Chesapeake Bay?

The answer is that he prefers to make art that has a function. In this case, he’s using new technology to build better artificial reefs for oysters — with an assist from nature itself.

The Chesapeake’s oyster population is believed to be at approximately 1% of its historic abundance. Scientists say habitat loss is partly to blame. In many places, dredging has reduced oyster beds to thin, half-buried sheets of dead shells that offer little support for new generations of bivalves.

Restoring oyster reefs is one of the top goals of the multistate and federal Bay cleanup program. Oyster shells are widely believed to be the best perch for attracting and growing young oysters, but it’s hard to find enough shells — dead or alive — to use for restoration. Fishery managers have substituted other materials, such as granite, with mixed success.

Hoover is collaborating with the University Maryland Center for Environmental Science on developing a cementlike substance that, they hope, will provide growing strata for oysters and approach the productivity of natural reefs.

Well, UMCES is only one of his collaborators. The other is a common type of bacteria that doesn’t cause disease and lives in the soil.

When mixed with nutrients, Sporosarcina pasteurii spits out calcium carbonate crystals, one of the main ingredients in oyster shells. Hoover and his team combine this mixture with sand. The crystals grow to fill the space between the grains, binding them together.

The project puts the team at the front lines of a field still in its infancy. Biofabrication, as it’s called, harnesses biological organisms to make new products.

Hoover describes the process this way: In manufacturing, humans start with something nature has made, cut it up into smaller pieces and reassemble it into a product. One example: sawing a tree into boards and putting them together to form a chair. Biofabrication revolutionizes that process.

“What if we could take the tree cells and assemble those into the shape of a chair?” Hoover asked.

The lack of natural shells for restoring reefs has been an ongoing challenge in the Chesapeake. In Maryland, efforts to dredge buried shell have been greeted by criticism from anglers and environmentalists, who say the practice destroys valuable fish habitat. Restaurants and seafood businesses have partnered to conserve and reuse shells. But the total returned to the Bay hasn’t been nearly enough to offset the shells lost to harvest and ensure a ready supply for restoration sites.

Fishery managers have turned to shell alternatives, such as concrete, granite and even porcelain toilets. But young oysters, known as spat or larvae, generally have had greater trouble latching onto the artificial materials. They also tend to grow at a slower rate.

Because biocement consists of some of the same ingredients as natural shell, Matthew Gray, Hoover’s partner at UMCES, thinks spat will be more apt to settle on it and grow compared with other artificial alternatives.

“Larvae are particular about what they want to settle on,” said Gray, an oyster researcher at the center’s Horn Point Laboratory near Cambridge.

Since biocement eventually dissolves when exposed to water, Gray and Hoover hope it proves more palatable to watermen and boaters, who have voiced concerns for years that concrete and other types of artificial reefs posing permanent navigational hazards.

“Nobody is really excited about dumping a bunch of concrete in the Bay,” Hoover said. “It’s essentially there forever.”

Hoover said his interest in biofabrication grew out of taking a class at the Baltimore Underground Science Space, a nonprofit makerspace for synthetic biology. An UMCES graduate student sat in on a biofrabrication lecture by Hoover and later introduced him to Gray.

“When I talked to Ryan he was like, ‘Oh, I think I could make oyster shells, if that would be useful,’” Gray recalled.

They started working together in January 2018, at first trying to reproduce a whole oyster shell in biocement form. Hoover initially forged the proper oblong shape of an oyster with a 3D printer, but it lacked the subtle ridges and other surface details of an authentic bivalve. So, they switched to growing the material in silicone-rubber molds. It takes anywhere from four days to 1 ½ weeks for the bacteria-sand mixture to grow to full size, Hoover said, adding that he hopes to find efficiencies to accelerate the process.

Then, it was Gray’s turn to test their creation with live larvae in a lab. The results were promising. More baby oysters attached themselves to natural shells than on the biocement, but his work showed that biocement was significantly more successful than the third material, granite. He counted just 15 larvae on granite versus nearly 200 on biocement.

Why the difference? Gray speculates that the presence of carbonate in the biocement and natural shells may be a cue to young oysters that they’ve found a suitable place to settle. The carbonate also may affect the water chemistry, giving oysters a better chance at success.

For now, Gray and Hoover are trying to gather funding. They have applied for $140,000 from Maryland Sea Grant, which would cover two years of research. They expect to hear whether they received it this fall.

To read this article in its entirety from Chesapeake Bay Journal, click here.

What's IMET? Find Out During Its May Open House

Check out glow-in-the-dark organisms. Conduct experiments with scientists. Hang out with a science superhero. You 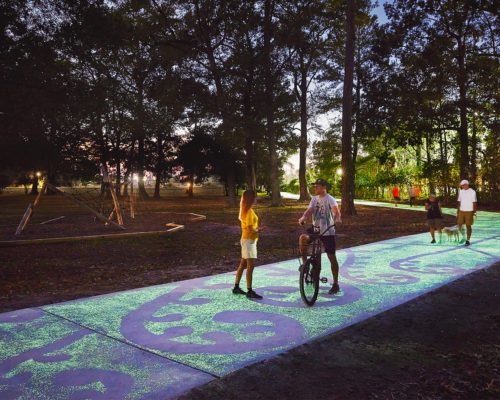