Skip to content
Advertisement
Photo: People for the Ethical Treatment of Animals

A new billboard, put up by People for the Ethical Treatment of Animals in the heart of Baltimore, is getting strong reactions.

The billboard reads, “I’m ME, not MEAT. See the individual. Go vegan,” alongside a photo of a live blue crab. It sits at the corner of East Baltimore Street and North Front Street, just off the busy downtown artery of President Street.

PETA aims to remind people that crabs aren’t inanimate objects, and motivate them to stop eating the crustaceans.

On their website, the organization writes, “Crabs have well-developed senses of sight, smell, and taste, and research indicates that they have the ability to sense pain.”

PETA goes on to describe crabbing methods it paints as cruel:”The crabs are crowded together in holding containers while they await their fate. Scared and confused, they may fight with each other after already sustaining injuries from rough handling.”

Negative response to the new billboard has been swift on social media. Some have expressed the futility of trying to get Baltimoreans to stop eating crabs. One popular local crab house, Jimmy’s Famous Seafood, blasted PETA repeatedly on Twitter. Tweeting a video of a steaming pot full of crabs and corn, Jimmy’s wrote, “@peta You mad?” The post below, greeting PETA with a photo of a big plate of steamed crabs, has received more than 44,000 likes on Twitter:

The billboard was erected weeks before the Baltimore Seafood Festival is to be held at the Canton Waterfront. In response, festival organizers posted its own photoshopped version of the billboard, accompanied by a discount code for $7 off festival tickets on Facebook: 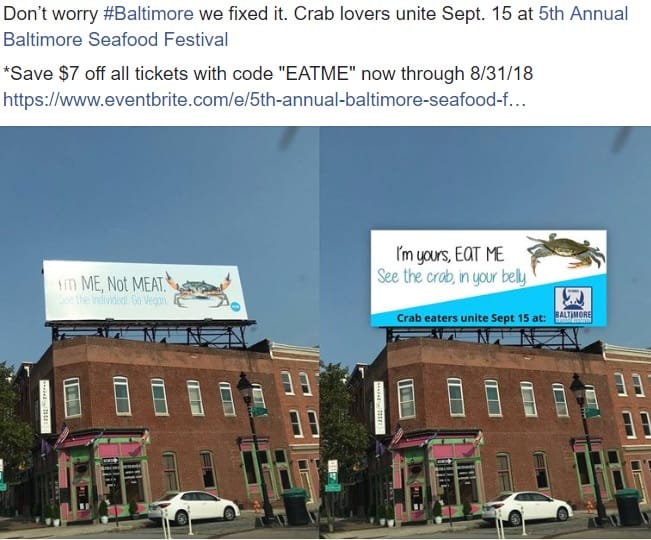 PETA has put up similar billboards featuring lobsters in the Northeast, as part of its “I’m ME, not MEAT” campaign.

A 61-year-old man died Saturday evening after being pulled from the water near Hart-Miller Island,

With Hurricane Florence picking up speed, and forecast to make landfall as a powerful hurricane