For Bay Pilots, Getting to the Top Isn’t Easy

It was just a routine trip up the Bay. At 19:30 I had boarded the Polish-flagged bulk carrier at the Chesapeake Bay entrance, and nine hours later I was approaching the Annapolis anchorage. The ship was to anchor there, waiting for her berth to clear in Baltimore a few days later.

On this March night, the wind had been picking up for a couple of hours, blowing at 20 knots with higher gusts from the NNE. The pilot ladder was rigged on the starboard side, one meter above the water, allowing the pilot boat to lay into the side of the ship without damaging the ladder. We were light draft, permitting me to go deep into the anchorage, steering towards the Severn River entrance. All the while slowing down, I made a sweeping turn to the east, which gave me a good lee for getting off once anchored. My boat, Pilot Express, was sitting a short distance off, waiting to see me at the top of the ladder I would begin to descend.

Considering the calm water afforded by the lee I created, it should have been a straightforward matter for the boat to slide in and get me. It didn’t work out that way.

Once anchored, there was a slight delay in getting my pilot order signed, and the ship’s captain wanted to chat. He seemed oblivious to the conditions outside as the ship began to weathervane. Standing on the bridge and looking over his shoulder, I could see the bow swinging towards the Bay Bridge spans in the distance. As politely as I could, I cut the conversation short and almost ran down the ship’s ladderwell to get to the main deck. Once there, I was surprised to see that the chief mate had pulled the Jacob’s ladder up onto the deck and was beginning to disassemble it. Realizing his mistake, he immediately began to secure it back over the side. By the time all was ready, there was no more lee; instead, there was a two- to three-foot sea running down both sides of the ship.

Looking at the Pilot Express now dancing in the waves, I decided I might get a better look at the conditions if I descended the ladder partway. After all, I was tired and wanted to get home. I convinced myself that things weren’t too bad and called the boat in. The operator expertly maneuvered the boat below the ladder. Trying to time my transfer, I watched the boat’s motion over the waves running down the side of the ship. This was not easily predictable in the dark. I stopped a few feet above the pilot boat’s handrail. While holding on to the Jacob’s ladder with my left hand, I reached down to catch the handrail with my right as the boat reached the apex of the next wave. At that point I would transfer over. I was a hair’s breath from letting go of the ladder when the pilot boat suddenly dropped away. I heard crewmen on the main deck shout in alarm as I swung out from the side of the ship. The boat rose up on the next wave and brushed the back of my legs, almost lifting me off the ladder. It was a heart-stopping moment. The boat operator immediately powered ahead, allowing me to collect myself before making another attempt. This time, when he drifted back I was able to make a smooth transfer.

Heading back to the dock in Annapolis, none of us spoke. The deckhand, the boat operator, and I were lost in our thoughts of what almost happened. Had I fallen into the 40-degree water, even wearing my float coat, there would have been little time to rescue me in the dark. My desire to get off the ship almost killed me.

In piloting, there are two important aspects to the job. First and foremost is to have the knowledge and skill to navigate ships—some longer than 1,200 feet and weighing 200,000 tons—safely on Chesapeake Bay. In Maryland, the path is usually to and from the port of Baltimore. As pilots, we are guardians of the environment. Our sole responsibility is to ensure the safe movement of ships on the entire Chesapeake Bay and its tributaries. This is a responsibility shared with the Virginia pilots to the south and the Delaware pilots on the C&D Canal.

The second thing is to be able to board and disembark safely. People aboard passenger ships sometimes witness the pilot transfer, which usually involves stepping off a pilot boat onto a few rungs of a rope ladder and into an opening in the ship’s side. Although this can be dangerous at times, it is nothing like climbing 25 feet or higher up the side of a merchant ship, particularly in foul weather. A slip from these heights has serious consequences, especially if the pilot should land on the deck of the pilot boat.

A ship will usually contact the pilot tower two hours out from the Capes. The pilot tower is located near the Cape Henry lighthouse and shared by both the Maryland and Virginia pilots. Its personnel act as informal traffic advisors and appoint pilots to their ships. They will also direct the ship’s personnel as to which side to hang the ladder for the best lee.

Boarding or disembarking ships requires close attention. If the bottom of the ladder extends below the deck of the pilot boat, the deckhand will pull the excess onto the deck. As the ship rolls, the pilot watches the motion of the ladder. He or she will then grab hold of the ladder as high up as possible and move quickly to get well above the pilot boat. Failure to do so risks getting knocked off the ladder or pinned against the side of the ship by a spirited, 50-ton (gross) vessel moving in the seaway. Typical boarding speeds are between 8 and 10 knots.

On December 30, 2019, a Sandy Hook pilot died in a fall onto a pilot boat while boarding the Maersk Kensington, a U.S. flag container ship bound for the terminals at Newark, NJ. The accident occurred at 04:30, and as of this writing is still being investigated.

On February 4, 2007, a pilot was lost at sea while boarding the Energy Enterprise, a U.S. flag coal ship bound for Baltimore, at the Delaware Capes. He was partway up the ladder when he fell between the pilot boat and the ship. The time was 18:30, and in the darkness he was never seen again. Pieces of his float coat were later found wrapped in the pilot boat’s propeller.

There are approximately 1,300 pilots in the USA. On average, there is one death or injury every year resulting from falls.

A pilot boat crew usually consists of a boat operator and a deckhand. These highly trained and experienced professionals literally have the lives of the pilots in their hands. When to stand off a ship, when to move in, when to request a reduction in speed or call for more of a lee falls to their good judgment. They will advise a disembarking pilot of ice on the ladder and/or ice on the pilot boat deck. The deckhand assists the pilot with his or her bag, manages the lower end of the ladder, and at times lends a hand for stability.

At 05:30 on June 30, 2018, Maryland pilot Captain Brian Fierro was disembarking from the car carrier M/V Glovis Companion. While at the top of the ladder and grasping the right stanchion, it failed under his weight, resulting in a head-down fall of 20 feet. Deckhand Bob Cousins quickly moved below him and broke his fall, literally saving his life. With both men badly injured, Captain Allen Gouldthread, the boat operator, declared an emergency and sped towards the pilot station in Lynnhaven Inlet, where an ambulance had been directed by Earl Sutton, the watch stander in the pilot tower. Months of recovery lay ahead for these two men.

Imagine closing in on a ship at night, miles out to sea, on occasion in heavy weather. The pilot boat advances towards a ladder made of wooden rungs and rope suspended from the side of a ship. There is a cluster lamp shining down from the main deck. One’s view from the boat is reduced to a small area of illumination down the side of the ship with a splash of light on the water below. But for the sound of the pilot boat’s engines and the occasional crackle of the radios, the rest of the world is black. It’s a very personal experience that is at times almost surreal. Those on board feel very connected to each other.

It’s 04:00 and we are outbound at the Virginia Capes. I am being escorted along the main deck by the chief mate. My ten-hour journey down the Bay is finished, and I have handed back control of the ship’s movements to the captain. After I leave, he will adjust the ship’s course and speed for the next port of call. We reach an opening in the deck railing and I wish the crew gathered there a safe voyage. I turn and face them. With both hands on the railing I step back onto the top rung. The mate, keying his portable VHF, briskly reports to the captain on the bridge a phrase that I have heard thousands of times during my 41-year career: “Pilot on the ladder.”

Bill Band graduated from SUNY Maritime College and served as a Maryland Bay Pilot First Class for over forty years, bringing thousands of vessels from 200,000-ton vessels to tall ships and every kind in-between into and out of Chesapeake Bay. 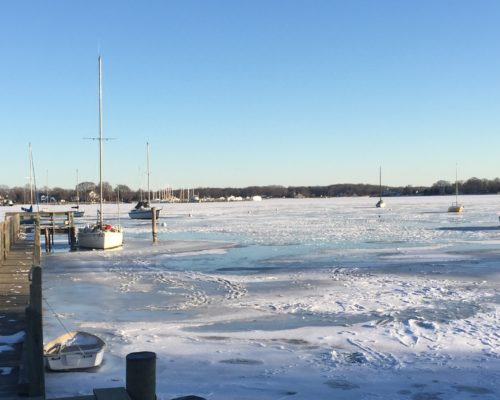 Up a Frozen Creek

Or: How to Navigate Your Way Through Winter Without A Boat Ah, here’s winter upon