A map of the Chesapeake Bay as you’ve never seen it was on display at Baltimore’s Artscape festival this past weekend.

The six-feet-by-ten-feet 3D relief map of the entire Bay is made of roughly 225,000 plastic straws, weighs 500 pounds, and is equipped with a stunning LED light display.

Artist Kasey Jones has been working with the National Aquarium on environmentally-inspired art installations for the past six Artscape festivals, held in the shadow of Baltimore’s Penn Station and billed as the nation’s largest free arts festival.

This year, the piece titled A Ripple Effect was born from a partnership with Washington, D.C.’s Our Last Straw Coalition, a group that pushed for D.C.’s new plastic straw ban.

Using straws left over when the ban went into effect, Kasey cut each piece of plastic with a mini-band saw, and glued each one by hand in five varying lengths, to recreate the topography of the Chesapeake Bay region. The artist, a masters-degree graduate of the Maryland Institute College of Art (MICA) tells Bay Bulletin she used 40 pounds of hot glue to affix the straws to a wood frame that was outfitted with LED lights by a professional LED artist. The entire project was covered with a plexiglass layer, and had to be transported in two parts. The process took 200 work hours over the course of five weeks.

Jones says at visitors’ first glance, the installation probably looked like just a neat image of the Chesapeake Bay, since from some angles, it appears flat.

“However, of those thousands of people who took a double take, they would suddenly be drawn into the space. Like a magnet, it pulled you in,” Jones explains.

And that’s exactly what she and the Aquarium were aiming for: “Once people were drawn into the space, Aquarium volunteers and I would
engage visitors by sharing information about the piece and our partnership with Our Last Straw. Through this exchange of information, genuine dialogue would spark about plastics, the ocean and what we can do about it today.”

If you missed A Ripple Effect at Artscape, there will likely be more chances to see it in person. The Aquarium tells us that Our Last Straw is looking for locations in D.C. to temporarily or permanently display the piece, inspiring even more people to rethink their use of throw-away plastics. 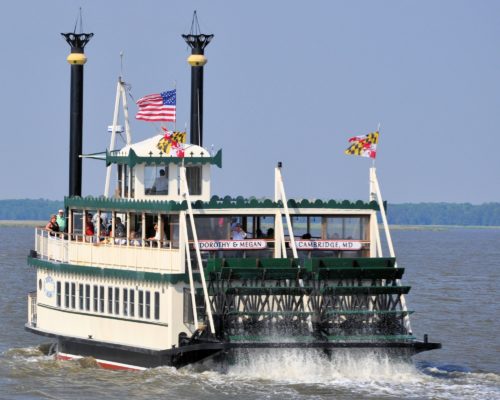 Over a century ago, riverboats transported Eastern Shore locals on day excursions and visitors from

The Chesapeake Bay states are now all under individual Stay at Home orders, with Washington,