From Fredericksburg, where it meets the tides, the Rappahannock flows some 80 miles to the Bay through some of the Chesapeake’s most scenic territory, including old-growth timberlands, well-tended farms, historic port towns, two sets of spectacular sandstone bluffs, and the “string of pearls” Rappahannock River Valley National Wildlife Refuge.

So it’s only fitting that a partnership of localities, organizations, and interested citizens is seeking to have the lower Rappahannock designated a Virginia Scenic River.

The Rappahannock’s upper reaches were designated as such back in 1985, from the eastern slopes of the Blue Ridge Mountains to Fredericksburg.

“The intent of the Virginia Scenic Rivers Program is to identify, recognize and provide a level of protection to rivers with significant scenic, historic, recreational and natural values,” says the Department of Conservation and Recreation.

The tidal Rappahannock’s large marshes and wooded swamps provide habitat for tens of thousands of migratory waterfowl and songbirds, plus
furbearers including river otters and even bobcats. The bluffs and their intervening ravines form one of the most important wintering and nesting areas for bald eagles in the United States. The entire lower river serves even more eagles plus many nesting ospreys and great blue herons.

It has also served humans for several thousand years, including the Rappahannock Tribe, which calls it “The Place Where the Water Rises and Falls.” The Rappahannock and the Tribe figured prominently in the explorations of the Jamestown Colony’s Capt. John Smith in 1608.

Since then, the river has served as a corridor for trans-Atlantic tobacco trade, then Bay steamboats, and now for barging grain.
The lower Rappahannock has the potential to bring ecotourism and other economic development to the counties that border its banks. Since the Essex County Conservation Alliance (ECCA), the Friends of the Rappahannock, and Scenic Virginia teamed up last year to explore a Scenic River designation, eight of the nine counties along the river have signed on to the effort, along with the City of Fredericksburg, the Towns of Tappahannock and Port Royal, and a long list of local and regional organizations involved with the river.

DCR began the evaluation process in September and has nearly completed its survey, which the lower Rappahannock is expected to pass with flying colors. At that point, the elected officials of the counties and towns can formally accept DCR’s report and pass resolutions endorsing Scenic River designation. Then a 2021 General Assembly bill by state legislators would make the river’s designation official.

“Scenic River status,” said ECCA Vice-President Hill Wellford, “allows our counties to market the river, its recreational opportunities, the bounty that it produces, and the history and culture of our area. Once designated, it becomes a source of pride for our citizens…Scenic River status
helps brand our tidewater region, and helps protect, even increase, property values and attract new residents and retirees to our area.”

Below, find a full list of counties, municipalities and organizations in the partnership:

Ever Forward Makes (Uneventful) Return to Port of Baltimore

It was a better visit to Baltimore for the 1,095-foot container ship Ever Forward last 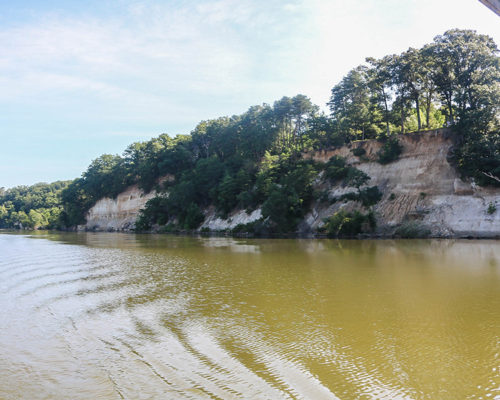