People at the southeast Baltimore waterfront couldn’t miss it Monday afternoon: a blood-red plume spreading near the boat ramp at Canton Waterfront Park out into the Inner Harbor.

Blue Water Baltimore’s Waterkeeper team sent its scientists to the scene, who alerted the Coast Guard and the Baltimore Department of Public Works (DPW). Two hours later, the source of the plume was traced to a water main break six blocks directly north of the waterfront park.

DPW confirmed the cause was a 6-inch water main break, explaining the discolored water this way:

“The clay-colored water is attributed to water released from the broken main and mixed with dirt and/or clay-colored fill. This water discoloration is temporary and does not pose a public health threat.”

But Blue Water Baltimore says it may pose a Bay pollution threat. The waterkeeper organization tweeted, “DPW crews are repairing the break but are not protecting storm drain inlets. Sediment like this can carry heavy metals, excess nutrients, & other toxins.”

The water main break and subsequent spill underscore Baltimore’s aging infrastructure. DPW has an interactive map tool online for residents to check for water main breaks. As of Monday evening, there were 14 breaks confirmed, repaired, or with repairs in progress, around the city.

Thanks to the handiwork of Ocean City, Md. residents, once-scarce waterbirds may be returning to 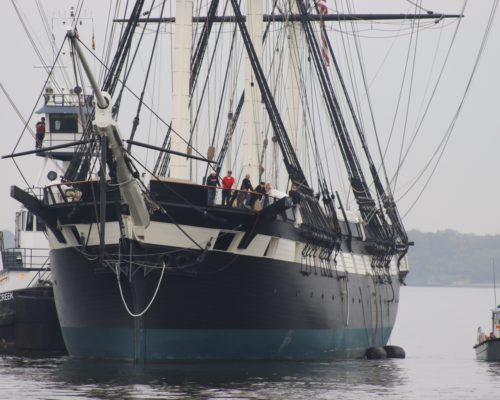 USS Constellation Moves to Drydock for Rest of 2022

It’s a sight not often seen in the Baltimore Harbor: The USS Constellation, headed down