Story and Photos by Jay Fleming

Runoff in the Chesapeake watershed carries sediment into its creeks and rivers, eventually depositing it into the Bay where it settles to the bottom. As a result, the Bay’s deeper channels fill in over time. Constant dredging is required to maintain access for the ships that use the Port of Baltimore, which provides 1,200 jobs and generates more than $2 billion in business revenue annually for Maryland. Hart Miller Island, just north of the mouth of the Patapsco River, was the first large-scale island restoration project on the Chesapeake. Dredged material from the Patapsco River and the approaching channels was used to rebuild the island, which had nearly eroded away. Once the Army Corps of Engineers and the Maryland Port Authority had nearly completed restoring Hart Miller, they began to look south to Poplar Island as a new location to deposit dredged material.

The landmass, which totaled 1,100 acres and was home to the now abandoned community of Valliant in 1850, had been reduced to less than five acres in the mid 1990s. In 1998, construction of the armored shoreline began as it was determined that Poplar was to become the Chesapeake’s next restored island. Large granite rocks from a quarry in Pennsylvania were used to protect the new shoreline from further erosion.

After being dug from the channels approaching the Patapsco River, the dredged material was used to fill individual containment cells that made up the new Poplar Island.

Upon arrival to the island, the material is made up of 90 percent water and 10 percent sediment. Once the sediment settled to the bottom of the cells, the water was released back into the Bay to allow room for additional loads of dredge material. Phase one of Poplar’s restoration was completed in 2016 and consisted of 1,100 acres. The construction of phase two, a 575-acre expansion of the island’s northern portion, was completed in January 2021. The additional landmass added to the island will increase the capacity of dredge spoil by 28 million cubic yards, which is expected to be filled by 2032.

Phase two made the Poplar Island project the largest beneficial use of dredged material on the East Coast. The restoration is a win-win, both for the economy and the environment. π

A Boon For Bay Wildlife

As erosion continues to diminish the size of the Chesapeake’s islands, Poplar’s restored habitat is becoming more and more valuable for wildlife. Poplar’s isolation and lack of land predators such as foxes and raccoons makes the island habitat ideal for birds. The upland and wetland habitats created in the cells mimic the natural habitats along the shores of the Chesapeake. Dozens of species of waterfowl, shorebirds, perching birds, and birds of prey use the island as a resting place during migrations up and down the Atlantic Flyway. In the spring, thousands of waterbirds use the new habitat as a nesting grounds to raise their young. Large nesting colonies of glossy ibis, double crested cormorants, and least terns have been recorded on the island. Recently, a pair of northern shovelers was found nesting on the island, making Poplar the only known location where shovelers nest. Diamondback terrapins thrive in the shallow grass beds around the island, and in early June make their way up onto the island to lay their eggs. Terrapin hatchlings from select nesting locations on the island are collected and raised by local students in the Head Start program. There is a small herd of approximately 20 whitetail deer that roams the island.

The Maryland Environmental Service and U.S. Fish and Wildlife Service monitors the wildlife on Poplar Island throughout the year.

Poplar is growing by approximately two million cubic yards a year, and the cells in Phase II of the restoration are expected to reach their capacity for dredged material by 2032. The Army Corps and the Maryland Port Administration are looking south to Dorchester County at two disappearing islands—James and Barren—as the next sites to deposit sediment from the shipping channels leading to the Port of Baltimore and the C&D Canal. Work on the two islands, known as the Mid-Chesapeake Bay Island Ecosystem, is expected to start in 2024 with the construction of the armored shoreline. Once completed, the restoration of James Island is expected to add 2,072 acres to the landmass that currently totals less than five acres. Barren Island, whose landmass currently stands at approximately 100 acres, is expected to gain 72 acres through the restoration. 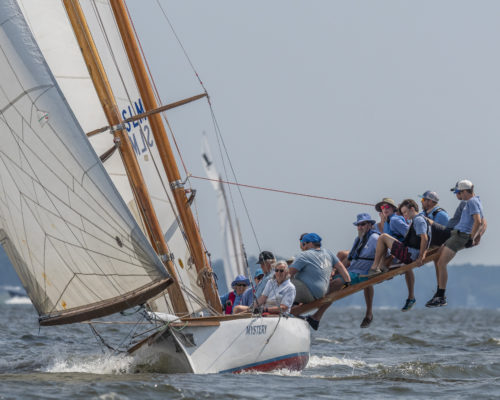 Without her masts, she looks a bit like a beached narwhal: rounded white hull, long