Riverkeepers are the Cal Ripken Jr.’s of the Chesapeake. Hear me out.

South Riverkeeper Jesse Iliff heads out on the water near the local yellow submarine, which you may remember from the March 2016 cover.

Cal didn’t reach and surpass Lou Gehrig’s record of consecutive games played by taking shortcuts or by sheer luck. The streak wasn’t about a few bursts of brilliant fielding or some taters knocked deep into the fair side of the left field stands. No, the great #8 showed up, toiled, and did it his way for 2,632 consecutive contests. His achievement was doing what was right and good for the game for nearly a decade and a half.

Riverkeepers, whose purpose is to fight for clean water, are passionate about what they do, and they play the long game. Despite tough opponents and the inevitable slump here and there, their passion, skill and resolve to see drinkable, swimmable and fishable water become a reality is what spurs them on. They proudly do what’s right, day-in and day-out.

The Model is Born

John Cronin and Robert F. Kennedy, Jr. chronicle their fight for clean water in their 1997 landmark book, The Riverkeepers. What began as the late Bob Boyle’s Hudson River Fisherman’s Association in the 1960s became the model for the Riverkeeper program, which has grown far beyond the Hudson. The association and the book established a blueprint for how grassroots citizen activism can make a difference against daunting industrial and political power. Cronin recalls his first pollution bust, an Exxon oil tanker discharging pollutants into the Hudson. While the tanker’s captain probably scoffed at Cronin and his self-identification as a Riverkeeper, the program got the last laugh as Exxon ultimately agreed to get lost and pay what was then considered to be hefty sums to the state of New York, some of which went on to fund the Riverkeeper program and the Fisherman’s Association. With this success, the Riverkeeper model took off.

Riverkeepers now keep company with other waterway activists with a variety of monikers such as waterkeepers and shorekeepers, and the crusade has evolved into a worldwide network under an umbrella organization known as the Waterkeeper Alliance. In Bay country, Waterkeepers Chesapeake boasts a formidable lineup of clean water advocates. Executive Director Betsy Nicholas says the united front works because of its keepers’ strong commitment to the communities they serve and their depth of knowledge and skill. “Waterkeepers Chesapeake and our member organizations are not afraid to take action to defend clean water laws and hold industries and agencies that harm our waterways accountable. Because our small, regionally based organizations have a deep connection to local issues in their communities, we work from the bottom up to improve the rivers and streams of the Chesapeake and Coastal Bays,” she explains. What’s more, Chesapeake Riverkeepers wear many hats and try to knock it out of the park no matter what the role of the day may be. “Waterkeepers are highly skilled and talented and serve a variety of roles—scientist, educator, spokesperson and even private investigator. We fight every day to protect families and communities from pollution,” says Nicholas.

Now that you know what they do, let’s get an inside look.

Meet (a Few of) Your Keepers

What it Means to be a Riverkeeper: Naujoks has gone toe-to-toe with big polluters and has consistently held them and state agencies accountable. When it comes to the river, there are no compromises to be made. He stays true to some poignant advice he received early in his career: “Always do what’s right for the river, and you will always make the right decision every single time,” he explains.

In the Works: Ensuring a better future for the Potomac at the Alexandria waterfront. Naujoks says that combined storm water and nearly 70 million gallons of sewage plague the historic locale, and he and his colleagues won’t accept the continued excuses of politicians and so-called experts. “We take on the biggest, the hardest issues—sometimes it takes years, and years, and years,” he says of the work in Alexandria as well as the D.C. sewage system and water quality in the Shenandoah.

Excited About: The many, many people behind the fight. Naujoks says that now is the time to stand together and demand quality water, and he references polls that prove it’s what citizens want. “In general, the public not only supports clean water but supports investments to protect clean water, investments in clean water infrastructure. So this is something the public absolutely supports,” he says.

At the End of the Day: “We always have the science and law behind us. That’s the great thing,” he says.

Background: A bulldog of an advocate with more than three decades of environmental litigation experience.

Outlook for the Severn: Kelly believes the river will be close to maximum recovery within the next decade. “The reason I’m saying that the river will be as fully restored as possible in 8 to 10 years is that we’re going to stop most of the sediment coming into the Severn, at least 60 percent of the nitrogen and phosphorus, and that way the river will then come back to life on its own,” he explains.

It can be Problematic When: Contingents are at odds. In the land of permitting and restoration projects, progress has not been made without strained relations or red tape, in some of Kelly’s experiences. He, the EPA, and the Army Corps of Engineers haven’t always seen eye to eye, so perseverance has been the name of the game in many instances.

What sets Riverkeepers Apart from the Rest?: “[They] actually put projects in the ground that stop pollution,” Kelly says.

Recent Success: The Church Creek Initiative. More
than $5 million and countless hours of work went into the campaign started more than five years ago by the South River Federation.

In the Works: Helping Church Creek. The Federation received a $200,000 grant from the Chesapeake Bay Trust to monitor, in detail, the creek’s sub-watersheds over the next two years, which will enable the group to assess the efficacy of restoration efforts. Of this big-data opportunity, Iliff says, “We can really get a good handle on how well these different practices work, why they work or why they struggle. There’s plenty of people out there who devote a lot of their work to water restoration techniques, to building them, and to evaluating them. This is going to help contribute to a growing body of literature that can really say when and why and how watershed restoration projects work.”

Excited About: Social media’s impact on the fight for clean water. Regarding a recent video post of the newly installed Crab Creek trash trap, Iliff says, “we’ve been really pleased by the volume of traffic that our Facebook posts have made on this. I think it’s really important for a lot of people who aren’t necessarily that interested in the nitty gritty of water chemistry to have something that they can see, and that they know what it looks like, and that they know what it feels like to pick up trash.”

Recent Success: The implementation of bioreactors on a number of area farms. An effective agricultural practice, bioreactors are designed to reduce nitrogen and phosphorus. Pluta says there are nearly a dozen throughout Maryland. They’re an “excellent tool that we were able to bring to the agricultural community,” he explains. The Midshore Riverkeepers Conservancy recently received the Outstanding Achievement in Community Partnerships award from the International Dairy Foods Association for its use of a bioreactor on a dairy farm in the watershed. Pluta says it’s a finite example of how environmental stewards and the agricultural community can work and thrive together.

In the Works: Envision the Choptank, a collaborative group of the numerous stakeholders throughout the river.

Excited About: Working with the Chesapeake Legal Alliance to fashion a guide to get citizens engaged in the permitting process. If a citizen or group finds something concerning regarding waterway pollution and a potentially offending site, the tool offers resources addressing, “What you can do as a citizen to help alleviate that impact,” Pluta says.

Current Technology Favorite: The Water Reporter app, which allows users to report on waterway conditions and organize restoration activities. This helps Holland keep his finger on the pulse of what’s happening so he can follow up on any potential issues.

Proof Positive it Can Work: Franklin Point State Park. After concerned local citizens rallied to prevent the 477-acre haven from being developed into condos a while back, Holland and volunteers joined forces to clean it up and make it accessible to nature and waterway lovers. “Here’s something that was doomed for development, was saved from development, and now is enjoyed by people every day of the year,” Holland says.

From His Perspective: “We can do it, if we work together, and who else is around to stand up and say ‘We can do that! Let’s do it?’ It’s exciting, it’s fun, and the people are wonderful, and I just love everything about it.”

And there you have it. A consortium of advocates who leave it all out on the field each day. Their calling may be a far cry from the grand old game, but as far as getting the job done, the Chesapeake Riverkeeper streak is alive and well. 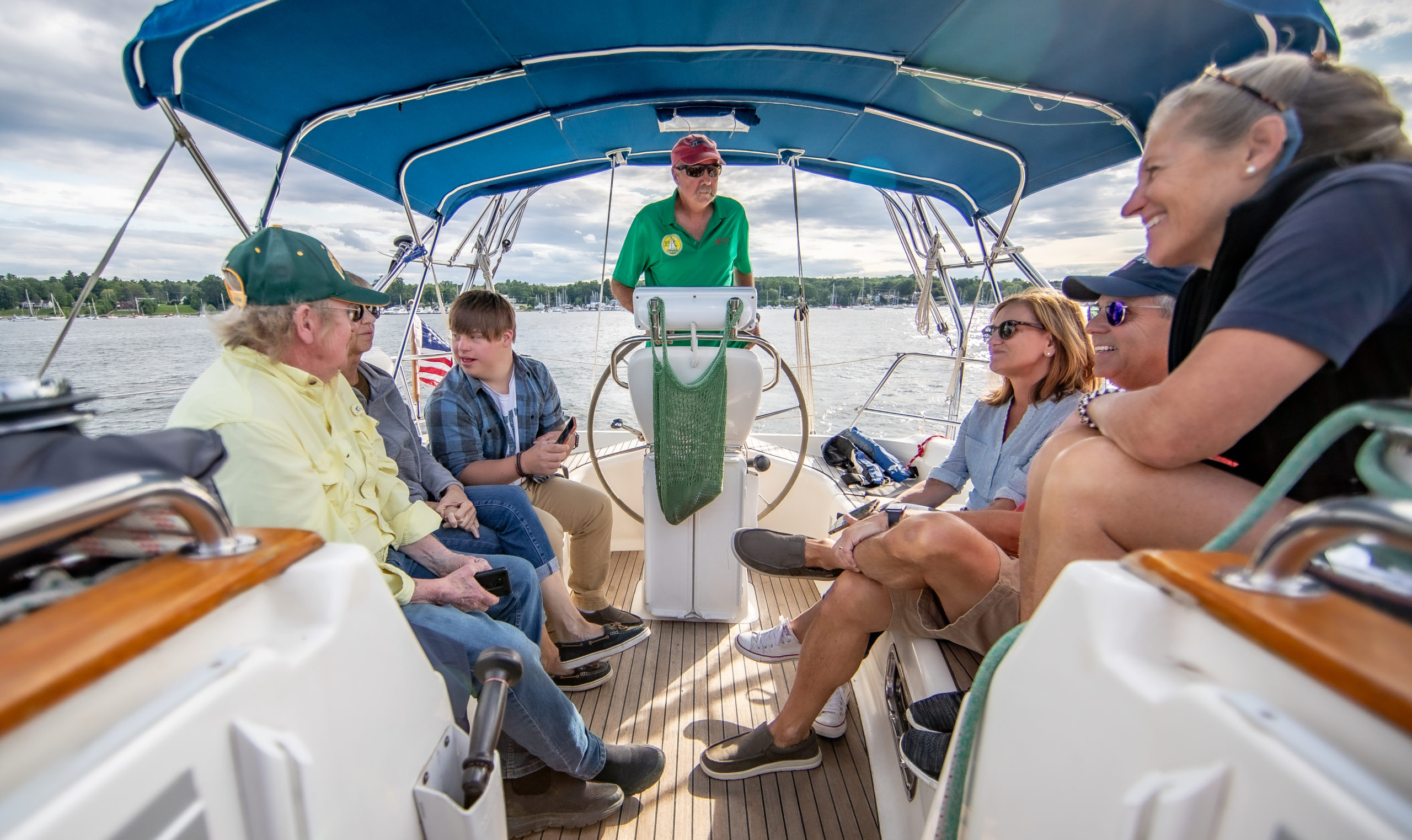