Story and photos by Sarah Barban

Most people only see Fisherman Island through their car windows as they pass by on the Chesapeake Bay Bridge-Tunnel. Stopping for anything short of an emergency is forbidden on this small spit of land where the Chesapeake Bay and the Atlantic Ocean meet.

Shorebirds and migrating birds, however, use this national wildlife refuge for nesting and as a final pit stop before crossing the Chesapeake Bay, and they are joined each year by a few lucky people who are willing to get up early on a Saturday morning between October and March to explore this speck of land with the Eastern Shore Chapter of Virginia Master Naturalists.

The Master Naturalists serve as guides for Fisherman Island tours, but that is just one piece of their overall mission to preserve nature and educate others. “The idea behind master naturalists was to train volunteers to help the Virginia Department of Conservation and Recreation and their partners to maintain or monitor public natural areas,” said Barbara O’Hare, the chapter vice president.

The Eastern Shore Master Naturalists help keep four natural area preserves on Virginia’s Eastern Shore clean. They walk the trails weekly and pick up trash at Savage Neck Dunes, Magothy Bay, Mutton Hunk Fen, and the Cape Charles Natural Area Preserve to make sure things are in order. When need be, they arrange work parties to remove invasive species and maintain trails at natural area preserves, as well as a nature trail at the Historic Onancock School where they hold training sessions.

Fisherman Island tours are a way for the naturalists to educate others about the importance of the island and about its ecology. The island is home to bald eagles, osprey, terrapins, and a host of other birds and animals who shelter in its maritime forest and salt marsh areas. Naturalists point out native and invasive species, tell of the island’s former life as a military base during the World Wars and show visitors artifacts that have been found on the island, like whale rib bones and bird skulls. 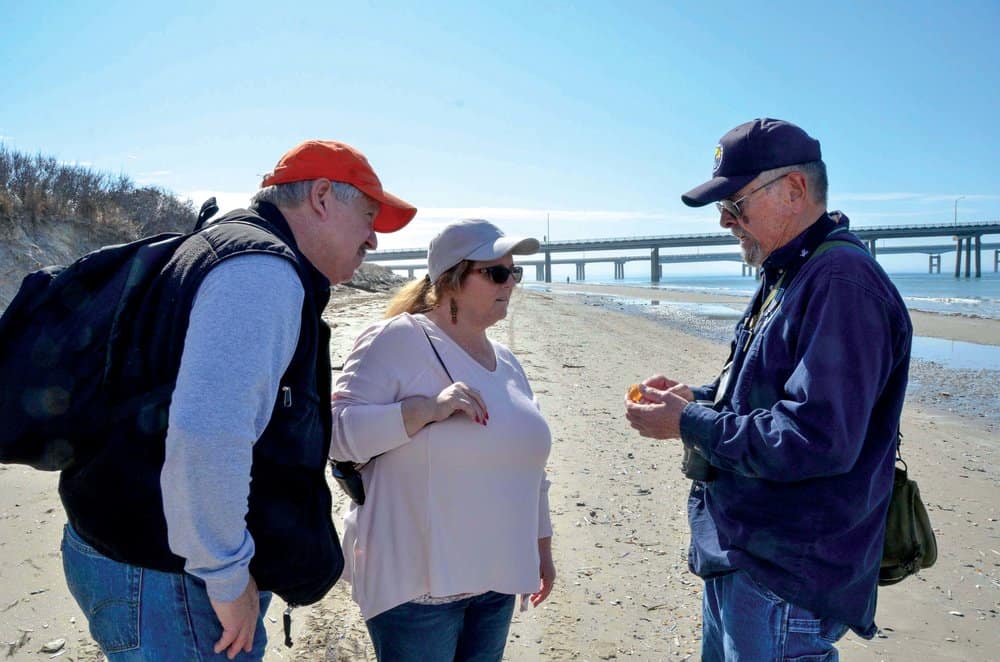 Jack Humphreys inspects a shell found by Mark and Esther Young of Virginia Beach during a hike on Fisherman Island. P hotos by Sarah Barban

“My wife had some friends who did this tour,” said Mark Young of Virginia Beach who attended the last Fisherman Island hike of the 2018 season. “When we heard about this opportunity we thought what a great chance. It’s a chance to learn and do something together that’s low tech and high fun.”

Becoming a Master Naturalist takes about a year and involves a 40-hour training class, which makes you a chapter member, followed by eight hours of advanced training and 40 hours of volunteer annual hours to be a Certified Master Naturalist. “It’s like the best graduate class you could ever take,” said Karen Lasley, a member of Eastern Shore Master Naturalists.

“Our ideal candidate is someone who is retired, has a lot of discretionary time, and likes to learn,” said chapter president Birge “Ric” Reichard. “A survey was done of members across the state of Virginia and it found that the number one reason people join is to learn.”

“It’s a wonderful way to get involved with local nature and to meet other people with similar interests,” O’Hare said. “It gives you an appreciation for the ecology here, what our challenges are and the uniqueness of this area with the barrier islands. We are just in a treasure spot.”

The Master Naturalists help more than their members get in touch with nature. Their hikes on Fisherman Island help locals and visitors get a glimpse into an extraordinary place.

The story of a couple with a crazy dream and two schooners.