Late August sun beats down on the broad afterdeck of the Callinectes, baking the gaggle of college freshmen arrayed around a chart of the Chester River that Dr. Douglas Levin has spread on deck.

“The Chester is a drowned river,” Levin, the deputy director for Washington College’s Center for Environment and Society (CES)  explains, running his splayed fingers along the chart’s serpentine bends. “Everything in white on the chart was river, and all the blue was dry land 12 to18,000 years ago.”

The freshmen, in their second day of college-intro-overload, look underwhelmed. But they perk up when Levin mentions the shipwreck he and CES Director Dr. John Seidel will show them today. In 2004, Seidel did a grid survey of the river and found 183 sonar targets that were “clearly something.” But this wreck wasn’t among them. Then three years ago, CES got a new side-scanning sonar. Seidel and Levin headed down the river to see what it could do.

“Doug was testing it and all of a sudden, this very large feature showed up on the radar.” says Seidel. “It was an eye-opener. I’d been over [the spot] with depth sounder on my own boat and never noticed it. It’s pretty startling. It can be right under your nose.”

One reason it’s possible to miss something that large–over 100 feet long in this case–is the shifting nature of the river floor. Storms, runoff, the wash of boat propellers and tides can significantly redistribute the silt and sediment. “It’s a larger question for these rivers,” says Seidel, who is a marine archaeologist. “You assume that wherever you’ve surveyed, you’ve found everything. But it’s possible the river bottoms are more dynamic than we realize, and these wrecks may be easier or harder to detect at any time.”

Once you’ve located a wreck, identifying it requires assiduous detective work. Original sources—newspapers, letters, journals and archives—all help, as does Wrecks of the Chesapeake by Donald Shomette, which details 21 vessel losses on the Chester in the past 270 years. One in particular looked promising.

In early May 1759, the English brigantine, Sophia, lay at anchor off Chestertown. The captain, mates and crew had gone ashore, (presumably to a tavern), leaving only the ship’s carpenter, a seaman and the cabin boy aboard. The carpenter “imprudently,” according to the cryptic Maryland Gazette report, decided to heat his pitch pot on deck rather than taking it ashore. There was a high wind. The rigging had been newly tarred. The pot overturned. The deck caught fire. Flame “ran like lightning” up the rigging “and was almost in an instant up at the masthead.” The three crewmen survived, but the vessel burned to the waterline. The flames must have lit up the sky for miles.

So, is it the wreck of Sophia? Maybe, maybe not. Since discovery, the water has been too murky for cameras to get clear images that might help decide the question. “Doug and I have a difference of opinion,” Seidel admits. “Doug thinks it could be Sophia, because it is a good-sized vessel, but I think the shape doesn’t look quite right.”

When the sonar is ready, Levin directs the captain to jockey the Callinectes around to bring the wreck’s image up onscreen.“Sonar shadows tell the story depending on the angle of the sonar as it hits,” Levin explains. He steps into the cabin and squints at the computer, waiting. A humped sweep of dark grey begins to build on the screen. 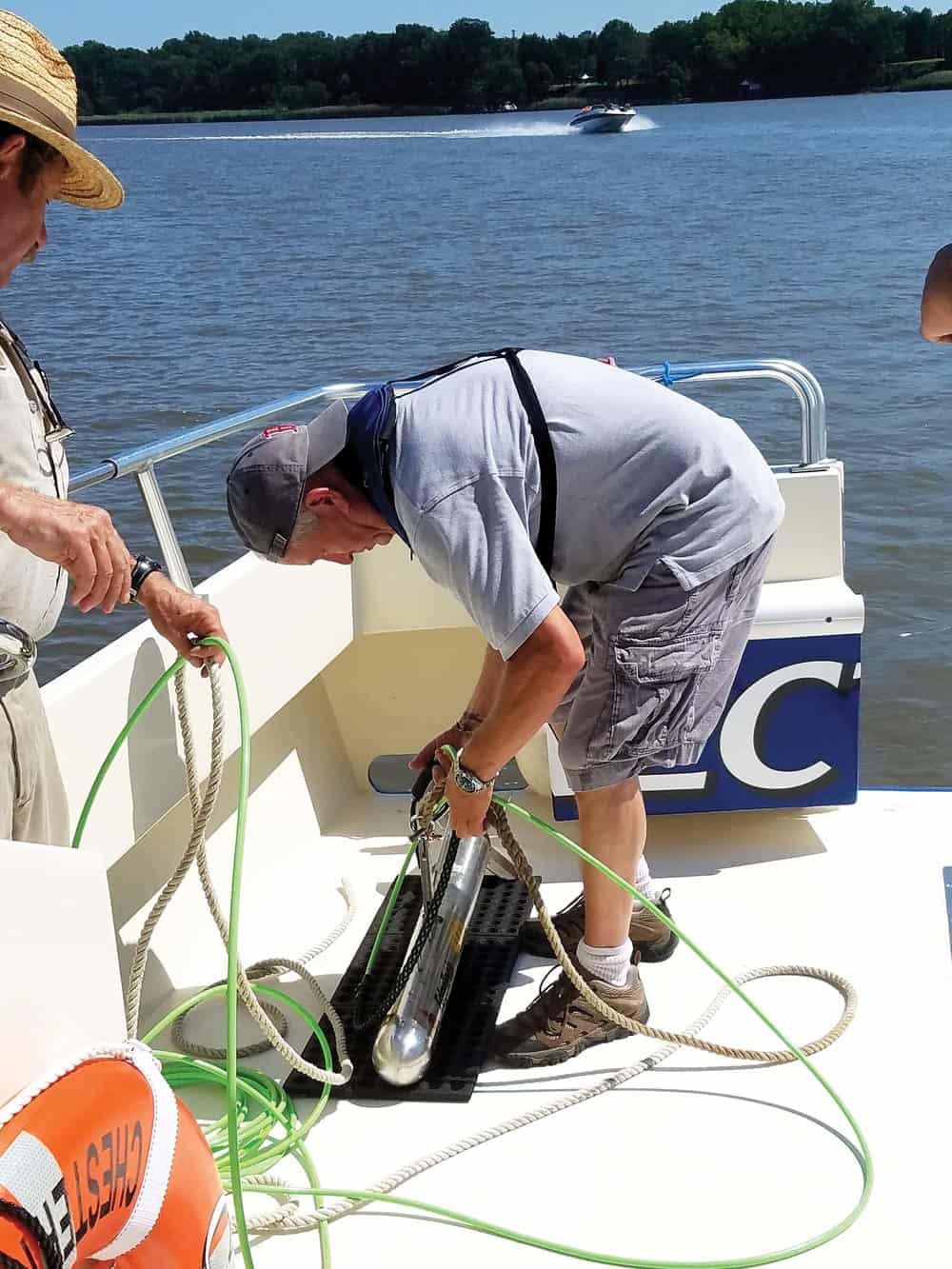 “That’s it! Hold it there!” he says. The sonar sends out pulse after pulse of acoustic signals that register onscreen like the row-upon-row progress of a lawnmower, slowly revealing a shadowy shipwreck-like picture. The students, who had been desultorily watching the shore slide past, now crowd around the computer, hoping to see a definitive hull, maybe some decking. But it takes a practiced eye to distinguish the object’s solid lines from the shadow cast as the sonar sweeps across the wreck like the rotating beam of a lighthouse. Levin traces his finger along the solid swell of a hull, then delineates the ephemeral sonar shadow.

Seidel says that, although this wreck is a good candidate for Sophia, he wants solid evidence, which he hopes to obtain if and when they can dive on the vessel looking for two kinds of clues.

“One clue is framing and ‘furniture,’” he says. “You can use things like the fasteners, the joinery, the plating, the rigging, a mast step or a stuffing box, to help date a wreck. The other set of clues would be any artifacts, personal objects.”

For the students, today’s glimpse through-a-veil-darkly offers possibilities for future study. The murky image onscreen is a ghost, but it is evidence of corporeal remains that, with digging, will bring to light another piece of the Chesapeake maritime story.

Nancy Taylor Robson is one of the first American women to earn a USCG coastal tug license. When not writing books, the Eastern Shore author gardens, sails and swats mosquitoes.

Vaudeville on the Choptank

The History of the two Johns.