In an age when bigger is always better and iPhones and SUVs seem to grow larger each year, the Reedville Antique and Traditional Small Boat Show is a welcome reminder that size isn’t everything. This quaint Victorian village on Virginia’s Northern Neck is home to Reedville Fisherman’s Museum, one of the best little maritime museums on the East Coast.  It seems fitting that their annual boat show is a celebration of vintage craft no longer than 25 feet.

While the event is sponsored in part by the Tidewater Antique and Classic Boat Society, organizer Clif Ames points out that a vessel does not need to be old to enter.

“Any traditionally styled boat built to a classic design is welcome, regardless of age,” he explains.

This concept opens the show to recently built replicas as well as restorations, and the result is an unexpectedly wide variety of boats for a small-town show. There are all the usual classics—homebuilt wooden rowing skiffs, deadrise skiffs, and even the authentic remains of a Chesapeake Bay log canoe. But there is also eye-candy in the form of a stunning display of painstakingly restored speedboats.

Several of these are tied at the Museum dock, and red seems to be the color of choice.  We marvel at a 1939 Hacker named Redux, built by the oldest surviving wooden powerboat manufacturer in the United States. It is nineteen feet of glistening mahogany, powered by a four-cylinder GM 80-hp motor. Tied beside her is another colorful classic, Wecatchem. A 1948 Chris-Craft Sportsman, it is one of only 225 produced, and the only one with a factory built-in tackle box. It is only on its second owner and has been preserved in its original condition. And then there’s Buttercup, a plywood 1958 Chris-Craft Cavalier and one of the earliest production boats to combine light weight and affordability to make powerboating accessible to everyone.

The Reedville Antique and Traditional Small Boat Show draws dozens of vintage beauties like these each year from across the southeast and Mid-Atlantic region, dating in age as far back as the 1920’s. Some come by water, but most are trailered in and displayed on land, and their owners bring them regardless of the weather—a good thing on a rainy September Saturday.

“They’re boats. They can get wet,” jokes James Ray as it starts to drizzle. He and wife Sandra are standing beside their 1959 fiberglass runabout, Ruby Slipper. Having replaced the windshield and refinished the interior, they are currently in search of a vintage Mercury short-shaft motor.  Their love affair with vintage boats has become something of an all-encompassing pastime. They are also in the process of restoring a 1981 Carver Mariner.

“It isn’t something we planned on doing,” Sandra admits, laughing. “We see a boat and say, ‘Isn’t that cute?’ and before you know it….”

The one-day event isn’t just for looking—you can also get out on the water. Rides are available on both the Museum’s 1922 deck boat, Elva C and on the skipjack Claud Somers, weather permitting. Unfortunately for us, the drizzle turns to thunder and lightning as the sky darkens, so we won’t have a chance to experience one of these antique wooden workboats firsthand. For skipjack captain Gerhard Straub, taking out visitors is the best part of the job.

“It’s so cool to keep something like this running, and to give people who may have never been on a sailboat a chance to get out and see what it is like.”

Fortunately, the weather doesn’t deter the exhibitors, especially the costumed volunteers aboard the Spirit of 1608, a replica of John Smith’s ship perched on the Museum’s front lawn. They provide the crowd with entertaining commentary and a wealth of information about the explorer, even showing us a copy of Smith’s original chart.

“It could still be used for navigation,” one of the crew points out. “It’s no more than six miles off at any point. That’s pretty amazing if you think about it.”

We finish off our afternoon in Reedville under cover of the pavilion, eating oysters and sipping craft beers, followed by a stroll through the Nautical Flea Market and a last look at Wecatchem.

And that night, despite owning seven boats, we dream about a little red runabout.

Fall is the perfect time to get out and explore the Bay’s tributaries by paddle. 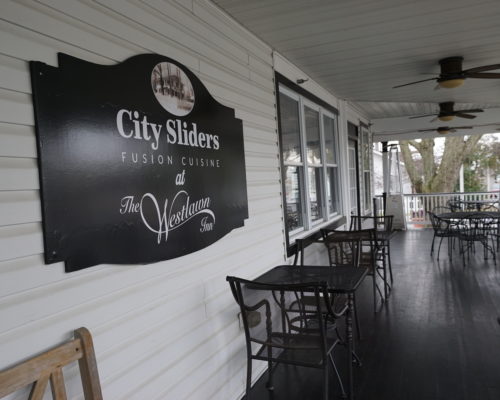 North Beach, Maryland, is best known for its Bay beach and boardwalk. But lately, it’s