American shad just couldn’t get a break this spring in their efforts to repopulate the Susquehanna River.

The migratory fish got a late start on their spawning run up the Chesapeake Bay’s largest tributary because the fish lift at Conowingo Dam remained shut down for nearly six weeks out of concern for spreading COVID-19 among workers at the dam.

Then, when the dam’s owner, Exelon Corp., finally figured out a way to run the fish elevator with reduced risk to the workforce, the facility shut down for the rest of the season after less than four days. The staff spotted some unwanted interlopers — northern snakeheads — hitching a ride over the dam with the shad.

It marked the first time the invasive fish from Asia had been seen in the Susquehanna above Conowingo, which is just 10 miles upriver from the Chesapeake Bay.

“We were directed by the resource agencies to discontinue operations due to the amount of northern snakeheads that were spotted,” Exelon spokesperson Deena O’Brien said.

Only 485 American shad made it over Conowingo via the elevator before it got shut down. That’s barely 10% of the 4,787 lifted over the dam last year, which was itself an all-time low since the lift was installed in 1991.

Lift operators spied a total of 35 snakeheads mixed in among other fish in the lift, according to the Pennsylvania Fish & Boat Commission. They managed to net and remove 14 of them, but 21 eluded capture and swam upriver once hoisted atop the dam.

Commission staff using electrofishing gear mounted a search of likely habitat for snakeheads and on May 21 recovered one, the commission said. An environmental consulting firm doing an unrelated survey of the 14-mile pond upriver of Conowingo turned another one in. But that left 19 unaccounted for.

“Further introduction of an invasive species such as the northern snakehead to the Susquehanna River watershed in Pennsylvania is something we take very seriously,” said Joshua Tryninewski, fisheries biologist with the fish and boat commission. “Unfortunately, a late start to fish passage operations followed by an increasing occurrence of the unwanted fish presented unfavorable conditions for successful shad passage and have posed a serious threat to the commonwealth’s aquatic resources.”

Northern snakeheads, which are native to parts of China, Russia and Korea, first showed up in the Bay watershed in 2002 when a pair were found in a pond between Baltimore and the District of Columbia. They have spread widely since, becoming established in the Potomac River and in rivers and creeks on Maryland’s Eastern Shore and all the way north to the head of the Bay.

Biologists have been worried that snakeheads, which eat other fish, could depress populations of other species. A survey of the Blackwater and Little Blackwater rivers on Maryland’s Shore — two places teeming with snakeheads — found a decline in fish of all types by more than 80% in a decade’s time. Studies elsewhere have not yet found such an impact.

Snakeheads have been trying to get upriver past Conowingo since 2017. Last year, a total of 81 snakeheads were spotted trying to take the lift, but all were caught and removed.

The lift on the east side of Conowingo dam normally runs from April 1 through the first week of June and carries migrating fish over the structure so they can reach spawning areas upriver. Two other dams upriver, Holtwood and Safe Harbor, also have fish elevators.

All three had been idled by dam operators after the governors of Maryland and Pennsylvania in late March ordered a halt to all nonessential businesses and activities to curb the spread of the coronavirus.

Environmentalists complained, and the staff of the Federal Energy Regulatory Commission asked Exelon to justify its decision not to operate the lift. The regulators noted that providing fish passage is a requirement under the company’s federal license to generate hydropower at Conowingo.

Exelon adjusted the workspace at the dam to separate lift operators from power plant workers and received Maryland’s approval to start moving fish the afternoon of May 12, and the other dams planned to do likewise. But amid snakehead sightings, the lifts at Conowingo and the other two dams were shut down again on May 15.

The abbreviated lift operation marked a dismal new low for the dwindling spawning run of American shad in the Susquehanna, where at one time they thronged the river and supported a bountiful springtime commercial fishery.

Once heavily fished and blocked by dams from historic spawning waters, American shad have been protected throughout the Bay for decades by a catch moratorium. Their numbers have rebounded somewhat in the Potomac and a few other rivers. But the Susquehanna’s situation remains troubled.

It’s a historic milestone on the Chesapeake Bay: Poplar Island, which had eroded away to 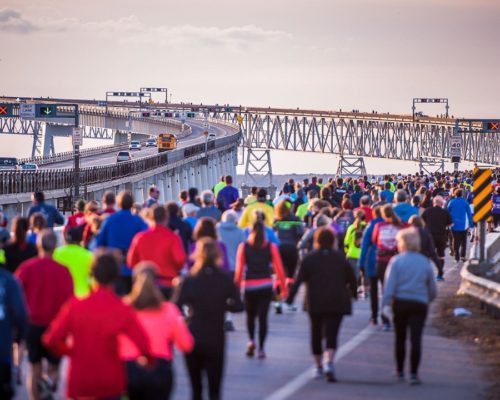 Some people are afraid to drive across the Bay Bridge, as it stretches 4.3 miles

The Watermen’s Museum in Yorktown is launching a new, free education program for students to