A new study on the Chesapeake Bay finds oysters may grow less “meat” if they’re exposed to low oxygen and warmer waters when they are young—common conditions of Bay summers. And that’s not good news for the oyster industry.

A team of biologists from the Smithsonian Environmental Research Center (SERC) on the Rhode River found that early exposure to tough conditions “could leave lasting scars on oysters’ ability to grow meaty tissue.”

In the Bay’s shallow tributaries, where Eastern oysters tend to live, oxygen levels can swing drastically from day to night in the hotter months. They can be perfectly healthy during the day and near zero at night. The research, published in the journal Ecological Applications, found that oyster react by focusing more on shell growth than tissue growth, to save energy.

That could lead to large oyster shells with puny amounts of meat inside.

“What we all of course want to eat at the raw bar is the oyster tissue,” says Sarah Donelan, a SERC postdoctoral fellow and lead author of the new report. “Customers and restaurants might be less pleased if there’s less tissue in what looks to be a large oyster.”

For this study, Donelan teamed up with SERC senior scientists Matt Ogburn and Denise Breitburg, experts in oyster conservation and how shellfish cope with the Bay’s environmental dangers.

Donelan ran an experiment in SERC’s cleverly-named Room of DOOM (Dissolved Oxygen Oyster Mortality), which mimics conditions in shallow Bay waters. She used 3,600 young oysters, exposing groups to hotter water, low oxygen at night, both, or neither, for 18 days.

At first, they showed no ill effects. But then she gave them a two-month break and returned them to the experimental tanks. Faced with the same rough conditions again, the oysters showed signs of strain, including oversized shells and underperforming tissue.

Donelan points out that things are especially bad for oysters, who can’t move within the water column like fish can.

The study’s findings could help oyster farmers to better protect their stock. They could track oxygen levels in the water, SERC suggests, bubbling extra oxygen into dead zones. Or, it may help to keep young oysters in tanks longer before moving them into the field. Protecting the oysters while they’re young is the key.

“Of course it’s more of a time investment to have to move oysters around or look at dissolved oxygen profiles on your farm, but it could be worth it,” Donelan said.

Morgan State U Gets $1 Million to Study Bay Microplastics

Baltimore’s Morgan State University is diving into the issue of microplastics in the Chesapeake Bay, 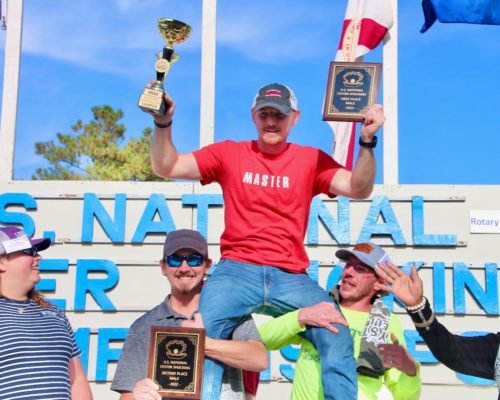