The Chesapeake Bay’s oysters already have plenty of challenges to deal with — nutrient and sediment pollution, parasitic diseases and harvest pressure, to name a few.

One thing they won’t have to worry about is getting sunburned. A new study finds Bay bivalves are apparently ingesting sunscreen ingredients from the water and sediment around them.

A team led by researchers from the University of Maryland, Baltimore County found ultraviolet-ray filtering chemicals used in commercial sunscreens, along with antibiotics and endocrine-disrupting hormones, in Bay water, bottom sediments and oyster tissue taken from the mouth of the Chester River and three water bodies on the Lower Eastern Shore.

The study, produced in collaboration with researchers from the University of Maryland School of Medicine, U.S. Forest Service and Maryland Department of Natural Resources, appeared in the August issue of the journal, Science of the Total Environment.

“Every day, we use these specialty chemicals, like antibiotics, like sunscreens, to improve our personal health, and these molecules go down the drain and eventually get discharged out into the Chesapeake Bay,” said Lee Blaney, the study’s lead author and an associate professor of chemical, biochemical and environmental engineering.

“Until recently, no one has tried to measure them in the Bay and see if they’re at levels that could have impacts…,” he added. “We found that indeed these chemicals are out there and at levels that have presented concerns in other places.”

The impacts on the Bay’s critters as well as human health are unknown. But one antibiotic was measured in at least one place at a level high enough to make potentially disease-causing bacteria resistant to treatment, researchers found. And the sunscreen chemicals reached levels that have been implicated in the die-off of corals in tropical waters.

“Are there environmental impacts on oysters? We don’t know that,” Blaney said. But, he added, “we figure it’s better to get out ahead of the issue” and determine if these contaminants are accumulating in sediment or living creatures and warrant further investigation.

Researchers collected water, sediment and oysters and mussels from two sites in the Chester River in 2016, and then sampled 12 sites the following year at the mouth of the Manokin River and in Holland Straits and Kitts Creek. The research work has been funded by grants from the National Science Foundation and Maryland Sea Grant.

Other studies have found pharmaceuticals and sunscreen ingredients in more populated watersheds, especially downstream from wastewater treatment plants. In an earlier study, Blaney said he found those contaminants in sediment and crayfish in Baltimore’s Gwynns Falls, a stream that doesn’t get any intentional wastewater discharges. The sources there could include sewage leaks as well as runoff, he suggested.

It’s not especially surprising that these chemicals turned up in the Chester, with a wastewater plant upriver discharging 2 million gallons daily. But Blaney said he and his colleagues hadn’t expected to spot the same contaminants in more rural areas like the Lower Shore. The sample sites there are downstream from a smaller wastewater plant in Princess Anne, which discharges 1.26 million gallons daily.

But there are also 29 large chicken farms in the watershed that produce about 3.7 million birds annually, the paper noted. It suggested that farm runoff contaminated with animal manure might be a source, or household septic systems leaching into ground water and streams.

At least one of the antibiotics found in the Manokin is not given to people, the paper noted. Two of the drugs detected have been found in poultry litter in other countries; though they’re banned for use in chickens in the United States, they are permitted for limited use in cattle and swine.

The sunscreen levels measured in the Bay were generally lower than what his earlier study found in the Gwynns Falls, Blaney said, but researchers were still surprised by the concentrations they found on the Lower Shore. One sunscreen ingredient they found reached levels that other studies have shown can harm water fleas and corals. The researchers suggested such findings warranted further study to see if sunscreen contaminants could affect Bay creatures, including the economically important blue crab population.

“These results emphasize the need to investigate the potential toxicity of estrogenic hormones and UV-filters to ensure the sustainability of not only oyster populations, but also restoration efforts in the Chesapeake Bay,” their paper concluded. “As Chesapeake Bay oysters are widely consumed by humans, the occurrence of these priority [contaminants] in oyster tissue, along with the continuous exposure to diverse antibiotics, also raises potential human health concerns.”

Blaney said technology exists that could filter out or chemically treat all these contaminants from wastewater. “But these things cost a lot of money,” he added.

“We find these everywhere,” he said.

Though sunscreen ingredients aren’t as persistent as some other contaminants impacting the Bay watershed, like polychlorinated biphenyls (PCBs), or per- and poly-fluoroalkyl substances (PFAS), Blaney said it’s clear they do linger in the ecosystem at least for a while, and more are getting into the water all the time.

“We’re not trying to tell people, ‘Hey, don’t wear sunscreen!’” Blaney said, because those compounds help prevent skin cancer. Rather, he said, he hopes research will prompt the public and policy makers to consider the environmental and health implications of chemicals used widely in food, cosmetics and other personal care products.

“Ultimately, they go down the drain,” he said. “It makes sense to start thinking about them now.”

Lighted Boat Parades: The Bay Does it Best

A lot of people across the country have similar childhood memories of the holiday season: 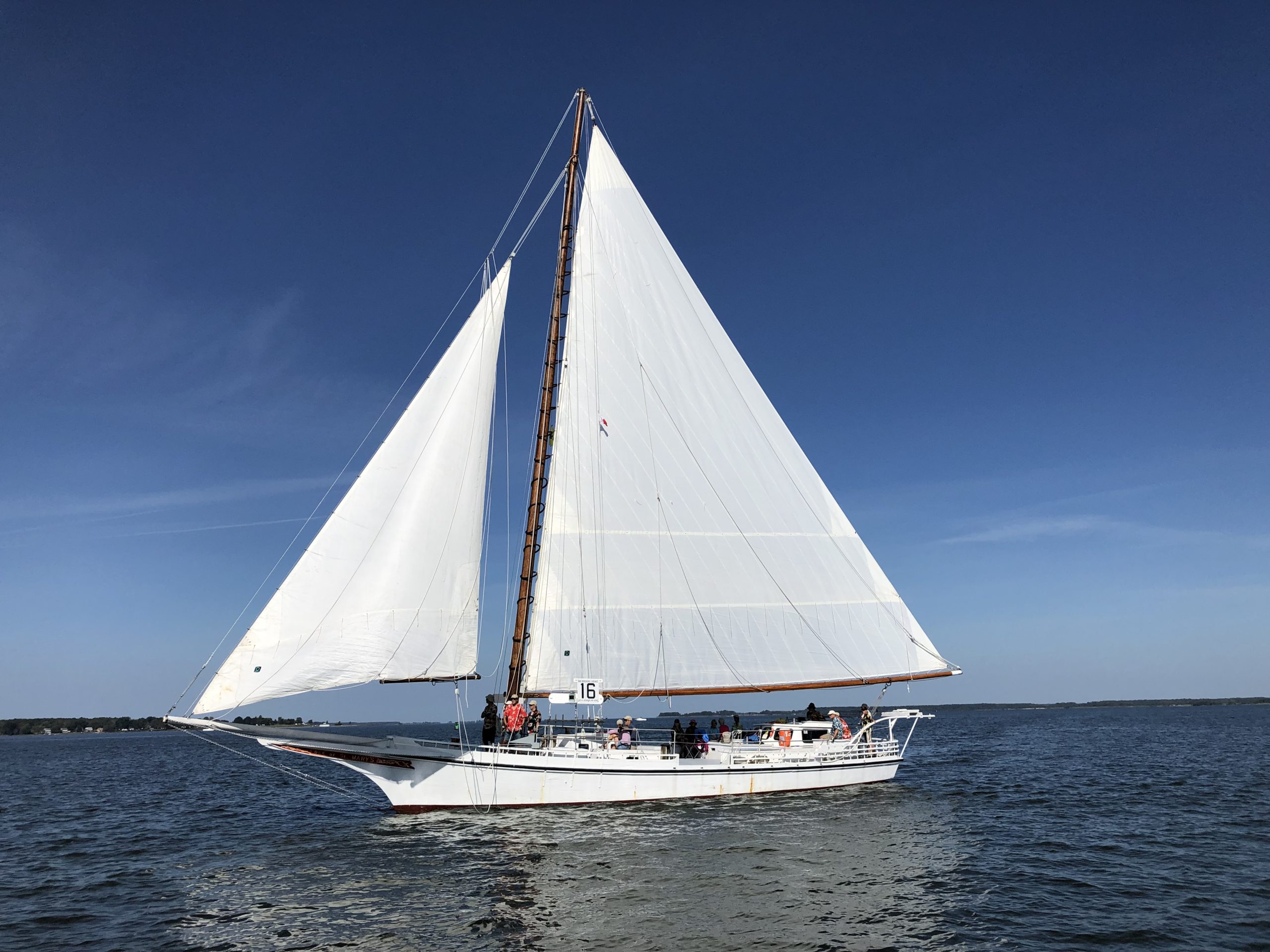