What happens to an abandoned boat?

There are few more pitiful sights than a badly neglected boat, half-sunk and forgotten. When I see one, I can’t help but wonder who left it there and why.

But an abandoned boat is much more than a sorrowful sight: It’s a crime, punishable by imprisonment and steep fines.

One such boat appeared in Martins Lagoon off Middle River last year: a 37-foot Egg Harbor powerboat, tied to a rundown pier and more than halfway submerged.

Neighbors filed complaints with Baltimore County. At first crack, authorities couldn’t trace the boat’s owner. Things grew more mysterious when the county dive team went looking for the hull identification number: It wasn’t there. But they did find the Maryland registration number. And that led Maryland Natural Resources Police officers to the boat’s former owner on the Magothy River.

Apparently, he was not the one who abandoned the boat, but he held a key piece of the puzzle. The owner had posted an ad on Craigslist, offering to give the Egg Harbor away to a good home. Restoring the older wooden boat had become too big a project for him. He found a taker—“a married couple,” he says. “They seemed legit.” Mark and Kimberly Bartels, from Essex, told the owner they wanted to restore the old boat, but balked at the restoration expense. In a fit of generosity, the owner agreed to cut them a check for $1,800 toward expenses if they would take the boat.

The Bartels towed the Egg Harbor using their own 33-foot Chris-Craft. The former owner snapped some photos as they motored away—photos that would later become evidence in a criminal case. 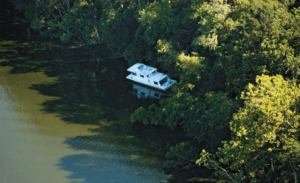 Someone, presumably the Bartels, cashed the check the next day, according to charging documents, and within hours, the first complaint came in: an abandoned 37-foot Egg Harbor, in Middle River near Martin State Airport.

Thanks to the former owner’s testimony and photos, police were able to track down the Chris-Craft that towed the Egg Harbor away, and ultimately, they found the Bartels.

Mark, 49, and Kimberly Bartels, 43, were charged in May, 2016 with illegal commercial dumping, abandoning a vehicle and altering the identification number on a vessel hull. Their case is being put to trial in Baltimore County District Court, and as of this writing, is still open. If they are convicted, the Bartels face fines of more than $31,000 and five years in prison.

Is prison time a harsh punishment for leaving a boat behind? The Natural Resources Police (NRP) say it ought to be. An abandoned boat is more than just an eyesore. It can be a navigational hazard and an environmental threat.

NRP public information officer Candy Thomson describes abandoning a boat, “littering in the grossest sense. You’re dumping it in someone else’s backyard, or just a public waterway,” she says. “You’ve made it somebody else’s problem by being selfish. You’re a slob!”

And there’s more: many times the state is left to clean up the mess. If the dumper can’t be tracked down and ordered to pay restitution, taxpayers foot the boat-removal bill. The money comes out of Maryland’s waterway improvement fund.

As a boatowner, you may not be able to control what happens to your boat after it’s hauled away. But, Natural Resources police stress, always use a professional salvage company.

Thomson points out, “[Professionals] do this for a living. They are the experts; they know how to dispose of a boat properly.”

Captain Dale Plummer, operator of TowBoatUS Annapolis, Baltimore and Middle River, advises boatowners to scope out a salvage company
before you actually need one. “Your insurance company should be able to give you a referral,” he says. “It’s bad enough that you have to get rid of your boat, but then you have to deal with companies that are not professional and can’t complete the job or worse.”

But caveat emptor: Buyer beware. When you do get rid of a boat,
make sure you have proper documentation and photographic proof so if the deal goes south you can exonerate yourself.

Talk of the Bay

OCMD Among 25 Best Beaches in U.S.