They go down the hill to the boathouse with intent, on bikes and on foot, wearing sailing gear with backpacks slung over their shoulders. It is a breezy May afternoon on the Rappahannock River, the Christchurch School Seahorses’ first day of practice after finishing third in the 2018 Mallory National Fleet Racing Championship in Texas. You might expect a little celebration since it was their first top-three finish in that prestigious event, but they are focused, almost businesslike, their eyes scanning the water.

Winning is not new to these teenagers. They are arguably the best high school sailors in the east, garnering firsts in the 2018 Atlantic Coast Championship and the Mid-Atlantic Scholastic Sailing Association (MASSA) Spring Fleet Championship and finishing in the top three at a half-dozen other major events.

It’s an impressive record for any team, but even more for the Seahorses, because the school enrolls just 211 students. Compare that to their toughest opponents at the Mallory Championship. Point Loma High School, which took first place, is a big-city school with nearly 2,000 students. San Diego-based Francis Parker School, which edged out Christchurch for second place, boasts an enrollment of 1,200 students. Christchurch is a David among Goliaths. So how did this rural school nestled in Virginia’s quiet Middle Peninsula become a high school sailing powerhouse?  It depends on whom you ask. 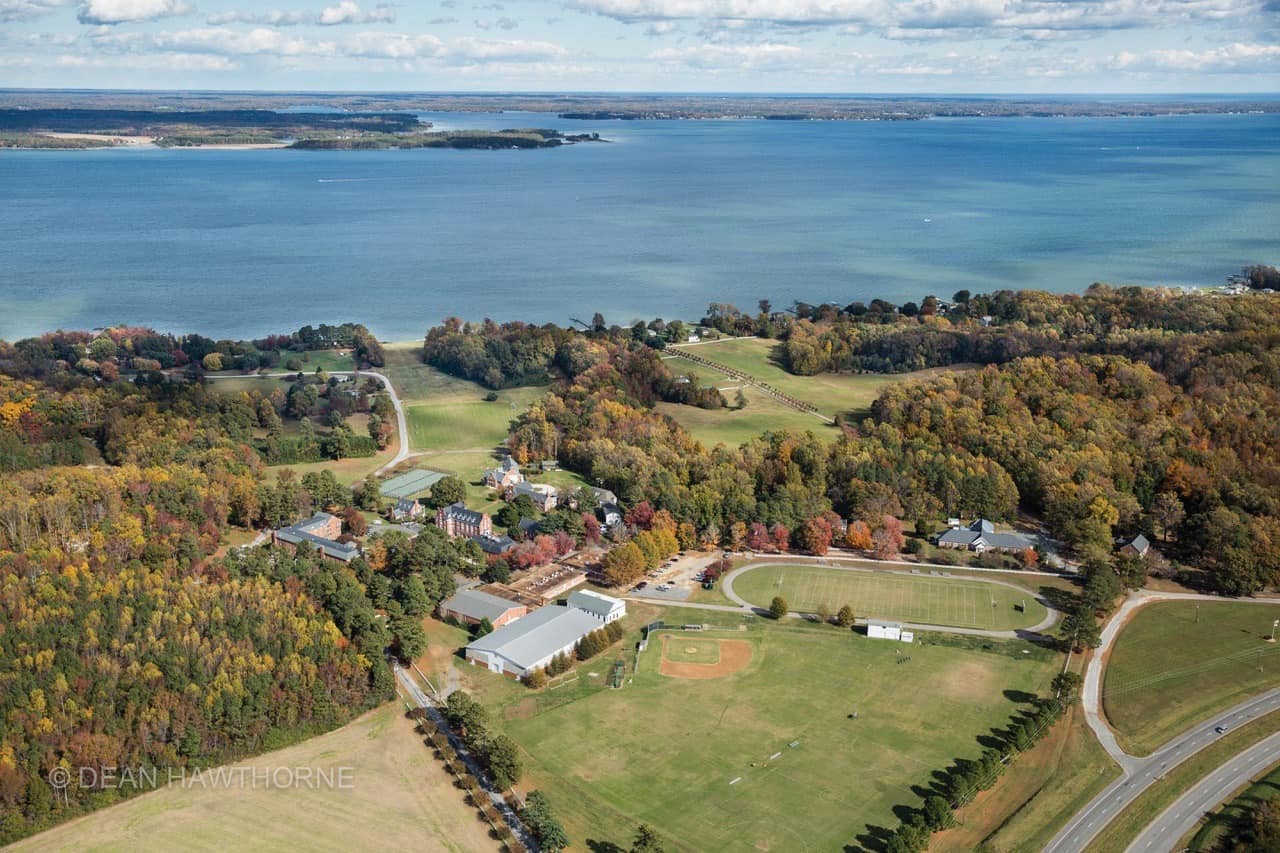 The school’s 125-acre waterfront campus is certainly a factor. Christchurch is one of only two high schools in the Virginia Interscholastic Sailing Association (VISA) to have its own onsite racing venue and fleet. Coach Kiernan O’Connell views the location as his best recruiting tool.

“If we can get prospective athletes to come here and see what we have to offer our team, we have a 95-percent chance of getting them to enroll.”

But bringing in the best sailors isn’t enough. According to athletic director Shannon Fisher, the magic is in the mission.

Christchurch School was founded in 1921 by the Episcopal Diocese of Virginia with the goal of creating “high character, pure and healthy bodies, well-furnished minds, and the spirit of unselfish service” in its students. For Fisher and her colleagues, the sports program at Christchurch is an integral part of that vision. Competition isn’t just about winning or building better athletes; It’s about building better human beings.

“That’s the bigger picture,” Fisher says, “And no department does a better job of living out our mission than the sailing team.”

For O’Connell, a New Englander with deep sailing roots, that means developing character traits like a strong work ethic, responsibility, and teamwork. This starts with the Seahorses’ rigorous schedule, practicing every afternoon and sailing in competitions year-round, because O’Connell believes there is “zero substitute for tiller-time on the water.”

It is a demanding routine that Mariana Guzman, an All-VISA women’s skipper, admits was her biggest challenge.

“It was hard for me to adapt to this schedule, with practice every day, but it has helped me to be a better sailor,” the junior from Mexico City says. Open and friendly, she is eager to talk about what led her to the banks of the Rappahannock. “My dream was always to study abroad. My oldest brother came here when the sailing team was building, and now he’s at Hobart…So here I am.”

Practice means more than just showing up on the waterfront. Like everyone else on her team, Guzman is responsible for her boat. Coach O’Connell notes that for some high-level sailors, this can be a bit of a culture shock.

“They are often used to their parents rigging for them,” he says. “Here, even the best sailor has to rig his own boat.”

He has also found it interesting to see top sailors from other schools struggle to load and launch their boats, something his students do every day.  O’Connell’s creed of personal responsibility even extends to student involvement in repairs. Maintenance of Christchurch’s fleet is student-driven, from replacing a shackle to patching fiberglass.

“They let me know what they need,” the coach explains, “and I walk them through the process. Having them involved leads to better ownership, and it is one of the keys to their success on the water.”

This team’s emphasis on hard work and accountability extends to academics as well. The students “are balancing a lot more than just sailing,” says Fisher. With more than thirty sports teams and co-curricular clubs available to them, it is easy to get overextended, especially when sailors miss classes to travel. Because the sailing team participates in events from coast to coast, their situation can be especially challenging.

“It takes a lot of discipline,” agrees Sally Johnson. A senior and one of the team’s strongest sailors, she says she struggled with the work load when she first came to Christchurch. “I couldn’t have done it without the teachers here, who accommodate student athletes.”

In fact, every student on the sailing team recognizes Christchurch’s “full-school” support for its students as a crucial factor in the team’s overall performance.

“The teachers understand, and they’ll work with you,” says sophomore sailor John Vail. “Even the schedule helps with athletics.”

Christchurch runs its classes like a college, with courses meeting on alternate days and built-in free
time to get assistance from staff or catch-up on work. Classes also rotate, so students who travel for weekend regattas are not always missing the same subject. All faculty members act as advisers, meeting daily with the students they mentor.  It is an individualized system, which Fisher says, “allows no excuses
for failure.”  Mariana Guzman credits these schoolwide efforts with keeping sailing team students on track.

“We couldn’t be this successful without all the support we get from the administration and the teachers,” she says. 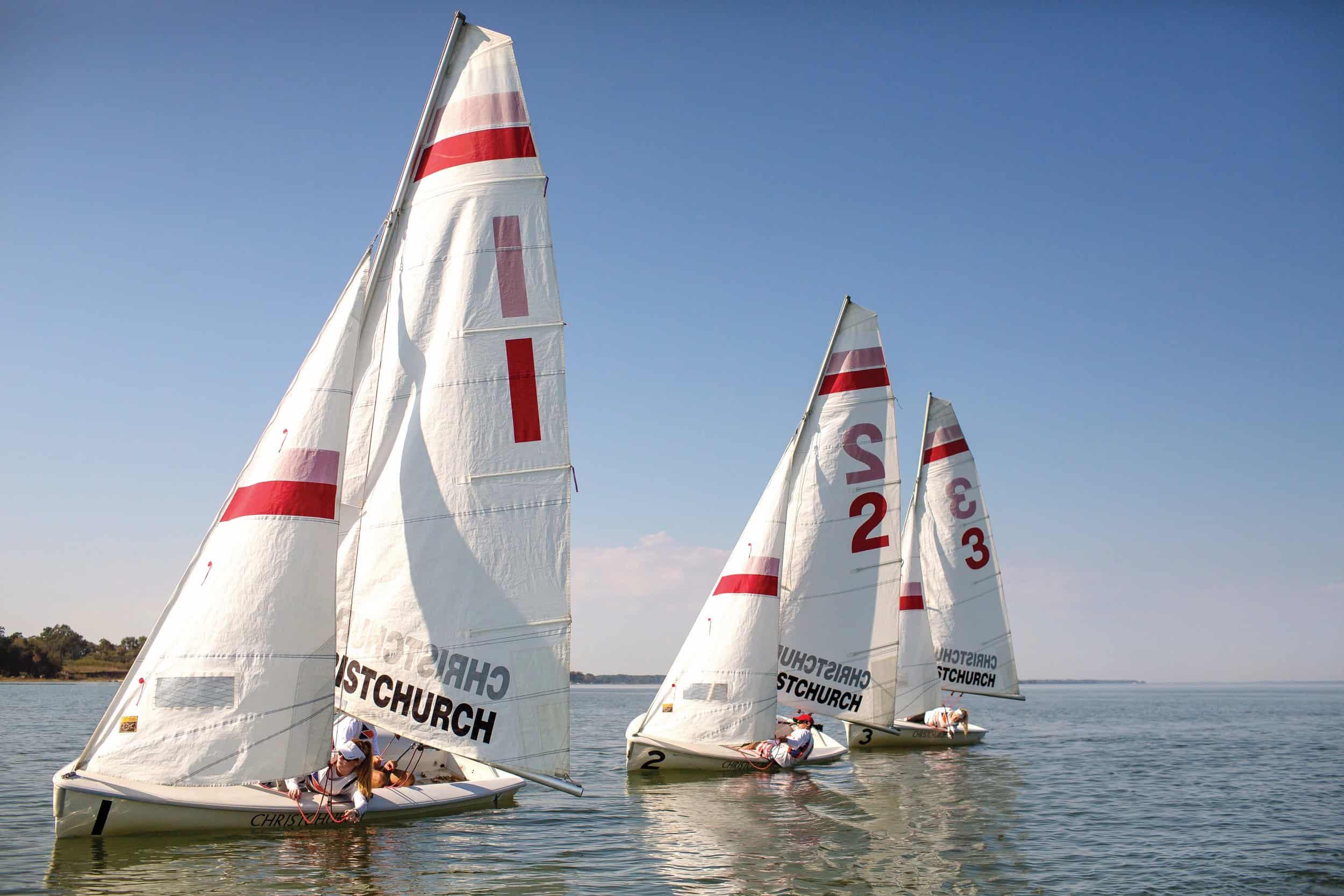 That support is financial as well. O’Connell points out that providing a program like the Seahorses sailing team is “a huge expense” and Christchurch’s commitment to funding is “second to none in the country.”
His position is proof of that commitment—he is one of only three full-time sailing directors out of the more than 600 high schools with sailing teams in the United States. He is also rightfully proud of the Seahorses’ 34 International 420 Class dinghies and the 21 new Zim Flying Juniors, a fleet which Guzman and Johnson call “the best in the nation.”

But boats don’t win races by themselves. That  work is in the hands of the sailors, and they are quick to acknowledge another key factor in their victories—each other. There is an undeniable comradery and closeness between these teenagers at practice, who are more like siblings than classmates.

“A lot of us knew each other from sailing before we came here, and those we didn’t know, we drew in,” explains Vail. “We’ve bonded.”

There are no stars on this sailing team, regardless of race results. O’Connell’s philosophy is that everyone must work together for the common good, considering the needs of others above their own. He impresses upon his students that a team is only as strong as its weakest link, and he encourages top-level sailors to train their younger, less-skilled and less-experienced teammates. Soft-spoken by nature, he does not bark orders or issue commands, but tries to gently direct his students. When one of his best sailors wanted to crew for an offshore race, an opportunity that would mean missing an important regatta, O’Connell didn’t tell the teen he couldn’t go. Instead, he told the teen it was his choice to make and asked him to consider his responsibility to the teammates. The student decided to put his team ahead of himself.

Living up to that creed isn’t always easy. Used to racing solo, Johnson says she had trouble coming to terms with the idea as a freshman. “Being on a team was a different kind of sailing, and I got frustrated,” she recalls.

She listened to O’Connell’s talk about the importance of teamwork, but it wasn’t until she was at her first national championship that she understood what he meant. She was in her boat, waiting for start, when “Suddenly it hit me. Everything came together. I understood you have to give up a little bit of yourself to help the team get where it needs to be.”

It is a lesson the Seahorses have taken to heart. Perhaps that explains why there is no loud celebration today over their success at the Mallory Championship. This isn’t the time to dwell on past glory—next weekend in San Diego is the National Team Race Championship for the coveted Baker Trophy (“The Baker”), and the team needs to practice.

These students may have a vision for the future, and the path begins again this May afternoon. They do not  know that they will finish out the 2017-2018 school year with a 3rd place finish in The Baker, or that in the fall they will win the Mid-Atlantic Team Racing Championship. But they do know that the next season will begin without Sally Johnson, who will graduate in a few weeks and go on to sail at the United States Naval Academy. It is a decision she says was inspired by her experience with the Seahorses: “Being on the team has taught me that I want to be a part of something bigger than myself.”

Ann Eichenmuller is a freelance writer and the author of two nautical mystery novels. She lives along Virginia’s Rappahannock River where she and husband Eric sail Avalon, a Morgan Out Island.
Share:

Officers of the Maryland Natural Resources Police face a challenging mission that often stretches them to the limits. Most say they wouldn’t have it any other way.

Sometimes the right boat just speaks to you. Story and photos by Joe Evans In