People have been going down to the sea in ships—and coracles, canoes, and strung-together bamboo rafts—since our species first learned how to make a craft that will float, but also carry a little something to sell, trade, or barter. Thus was born the merchant marine. While navies have protected and marauded for their nations (looking at you, Sir Henry Morgan), it’s the merchant marine that was instrumental in building U.S. economic power and providing wartime supply. ¶ “A healthy, resilient marine transportation industry is vital to America’s economic strength and national defense,” says U.S. Maritime Administrator Rear Admiral Mark Buzby. “We must maintain enough ships and mariners to compete internationally, support our military, and remain commercially viable.” The Chesapeake, world-renowned for its pleasure boating, also boasts two of the busiest commercial ports in the nation. Yet the Bay’s multi-faceted maritime operations are some of its better-kept secrets. “Our problem in Maryland is most don’t know we’re here,” agrees Bart Rogers, assistant vice president at Paul Hall Center for Maritime Training in Piney Point, Md. “We draw [many students] from Newbern, N.C., where they make their living on the water.”

There are three ways to enter the merchant marines. One is to go to a maritime college. Another—increasingly rare—is to “come up through the hawsepipe,” by climbing aboard a vessel with little more than a Merchant Mariner’s Credential (MMC), a Transportation Worker’s identification Card (TWIC) and a work ethic. Or, you can get formal maritime training at a dedicated maritime school. The Chesapeake is blessed with a range of maritime schools with training options for mariners of all stripes. And, because these schools are focused on turning out employable mariners, most also have close links to employers.

“We have relationships with people at Norfolk Tug, McAllister [Towing and Transportation], Great Lakes Dredge and Dock, Marathon Petroleum in the Western Rivers,” notes Caroline Smith, coordinator at Mariner Boot Camp, an adjunct of the Mid-Atlantic Maritime Academy (MAMA).

MAMA, which absorbed the Tidewater School of Navigation in 2006, trains approximately 3,000 mariners annually. Courses run the gamut from the Boot Camp, designed for total novices, to longtime professionals updating or upgrading credentials and licenses. Mariner Boot Camp, begun in 2016, has so far trained 104 students, 28 of whom are women. “We have two graduates with NOAA, some on cruise ships, and a whole bunch on the [cruise ship] Pride of America in Hawaii,” says Smith, who holds a 1600 Ton Ocean Master Motor, Steam, and Sail License.

At the northern end of the Bay, the Maritime Institute of Technology and Graduate Studies (MITAGS) in Linthicum Heights, Md. offers an apprenticeship program that connects students to potential employment. It requires the candidate to be sponsored by a company so they can accrue the necessary sea time for licensing. Additionally, an able seafarer (able seaman with a merchant ship deck-department rating) with sufficient sea service can take the needed courses and sit for a license without enrolling in an apprenticeship program. “The beauty of the apprenticeship is, when you finish, pretty much, companies offer a job,” says Glen Paine, executive director of MITAGS. “We have a 90-95 percent retention rate for those who successfully finish the apprenticeship program.”

Founded in 1972 in Baltimore by the International Organization of Master Mates and Pilots, non-profit MITAGS boasts a large campus near BWI and offers about 100 courses that range from entry-level for ordinary seamen (and women) through upgrading for licensed mariners to professional development, including courses designed for individual companies.

Whether licensed or unlicensed, mariner income is appealing. “Entry salary is $4,000 [per month] for whoever you’re graduating,” says Rogers. “And within a year, they’re eligible for upgrade. And when they make it, it almost doubles.”

Thirty-year-old J.W. Abernathy had dropped out of college and kicked around in service jobs for several years before opting for maritime training. He finished the unlicensed apprenticeship at Paul Hall Center (aka Piney Point) in 2015. While the work is hard (and starting at the bottom is rarely fun), he says the effort has been worth it. “I have a career that is going to give me financial stability and a way forward,” he says. “I’m able to buy a house. Plus, the [course] work helps with credits at the College of Southern Maryland, so eventually I’ll have an associate’s degree.” 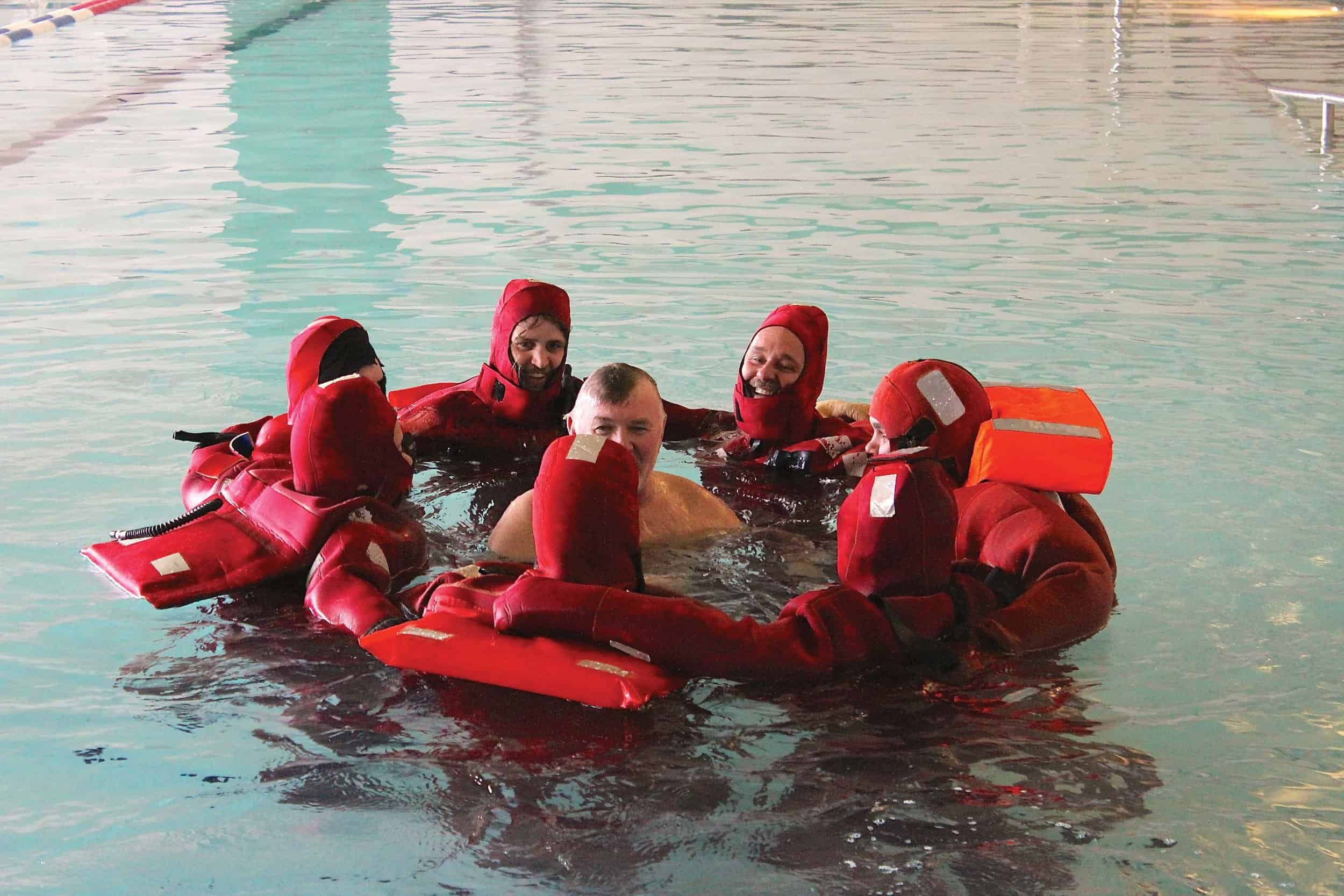 Located on St Mary’s River, The Paul Hall Center was established in 1967 as The Harry Lundeberg School of Seamanship by the Seafarer’s International Union (SIU). It requires membership in the union, but the training, room, and board are free. In addition to classwork, training includes hands-on work at the center. “You’re also working in the galley feeding the rest of the union people who are here,” says Abernathy, who recently took a three-week welding class there. Graduates find employment through the SIU union halls.

A non-union option is Chesapeake Marine Training Institute (CMTI) in Hayes, Virginia. Founded in 1992, CMTI trains those working on private and commercial recreational vessels in addition to the grittier world of tugs and Military Sealift Command ships. “We do a lot of seasoned mariners, who are upgrading and advancing in their career,” says Amanda Symonds, president of CMTI. “We also train those just starting out and getting into the industry.”

Bill O’Donovan, rather unseasoned after a 40-year career in newspapers, took the captain’s course in 2013 and now holds a 100-Ton Master’s License. “My experience was somewhat unique in that most of my classmates were younger men transitioning from fishing boat experience as deck hands,” says O’Donovan. “The entire exercise in gaining my Coast Guard license required 49 compliance hurdles. I would recommend CMTI to anyone who is serious about becoming a professional mariner.”

Kathy Tingley, another CMTI grad, fell in love with the maritime life at age 56 after time on a tall ship. She earned a 100-Ton Master’s License and is now first mate on a paddle wheeler in Rochester, NY, in summer and an ecotour boat in Florida in winter. She chose CMTI, whose courses, like those in the other schools, are U.S. Coast Guard approved, in part because of the class size. “Being an older person,
I wanted somewhere where I could ask questions in a smaller group,” says Tingley. “And the captains there have so much experience and share those experiences in addition to the course work.”

Some, but not all, of the mariner schools have on-campus accommodations. MITAGS and its West Coast affiliate, Pacific Maritime Institute (PMI) in Seattle, have on-campus hotels and other amenities to keep an oft-absent mariner’s family entertained while he or she takes classes. Students at MAMA and CMTI stay in nearby hotels if they don’t live close enough to commute.

“We have several local hotels in the area that we’ve contracted with for a deal for students,” says Symonds.

The Paul Hall Center has a dorm. The Calhoon MEBA Engineering School in Easton has on-site accommodations but differs from the others in its student body. The school was founded by the Marine Engineers Beneficial Association (MEBA), the oldest maritime labor union in the country, which began in 1875. The school was started in 1966 at the request of Military Sea Transportation Service, later renamed Military Sea Command (MSC), which manages transport and supply for our military around the world. “MSC didn’t have enough engineers,” says Chuck Eser, director at Calhoon MEBA. “From ’66 to ’88 about 2700 to 3000 apprentice 3rd engineers came out of that program.” Yet, while it began with an apprentice program, MEBA no longer offers one.  “Everyone who comes here already has considerable credentials,” says Eser. “Our courses aren’t tailored for a young person who’s trying to enter into the industry. For them we suggest they make application to the [maritime] colleges or Harry Lundeberg, which will take kids right out of high school.” 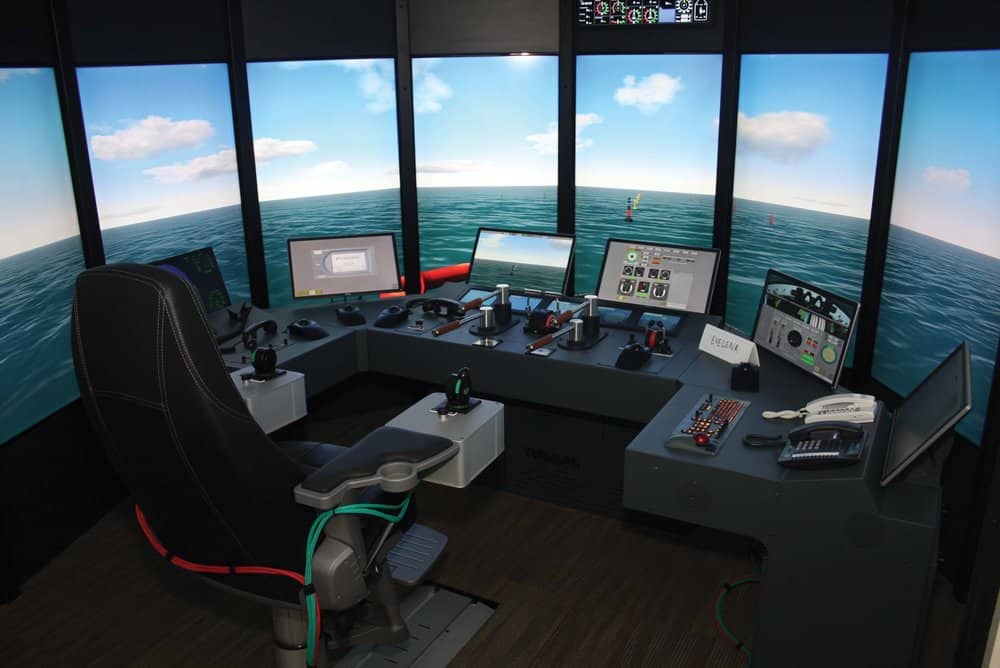 In Eastport, the Annapolis School of Seamanship (CBM’s sister company) began in 2002 by offering courses in basic boating. “We started out with a diesel engine course for recreational boaters,” says John Martino, founder and president of the school. “That moved into electrical classes, marine weather and navigation.” The school now also trains students for the Operator of Uninspected Passenger Vessels (aka “six-pack” license), the 100-Ton Master Mariner’s Captain’s License, and the 200-ton Master’s upgrade. The school has expanded its offerings and its range. “We also do B2B training solutions for other companies and do military and law enforcement seamanship training,” Martino adds.

The merchant marine is not everyone’s cup of grog. It’s a physically and mentally challenging career. It often demands weeks or months away from home. It can strain relationships, though it can help keep the spark in a marriage with each return home a kind of honeymoon once the yelling about who’s in charge is finished. But the skills, the sense of pride and the connection to a millenniums-old tradition can help to compensate for some of the sacrifice that mariners and their loved ones make.

Nancy Taylor Robson, author of Woman in The Wheelhouse, worked for six years on coastal tugs as a deckhand then earned her operator’s license in 1981. She has been married a long time to a longtime mariner.

The US Merchant Marine Academy in Kings Point, NY, like the Naval Academy, West, Point, and the Air Force Academy,
is a federal college. The education is free. In exchange, graduates are required to fulfill a period of military service on graduation. Several states have maritime colleges such as the State University of New York Maritime College (SUNY Maritime), which are maritime-focused. They require tuition but do not commit graduates to a period of service.

Seeing the World on Fisherman Island 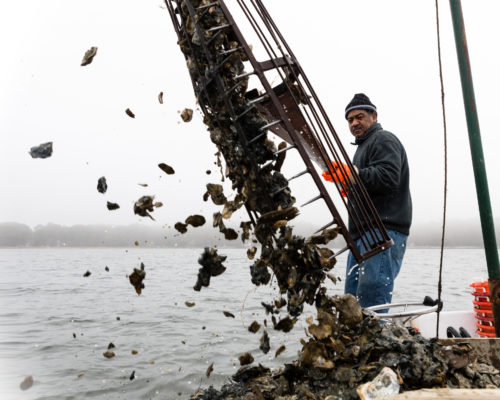 (You can do it, too) Few images evoke the history and culture of the Chesapeake