A historical hotbed for baseball talent

The nine counties of Maryland’s Eastern Shore are known for many things—popular beaches and outdoor recreation, picturesque farms, stately towns, and vibrant communities. But there’s a lesser known claim to fame as well: The region has been a breeding ground for elite Major League Baseball talent for more than a century. The Eastern Shore has even produced a trio of legends who have been enshrined in the National Baseball Hall of Fame: Frank “Home Run” Baker, Jimmie Foxx, and Harold Baines. Here’s a stab at a starting nine (plus the modern flourishes of a designated hitter and a couple of relievers) for the region, which has produced more than three dozen big league ballplayers.

Leading off is Talbot County’s Harold Baines, the most recent denizen of Maryland’s Eastern Shore to be voted into the Baseball Hall of Fame. Inducted in 2019, Baines was one of the greatest prep baseball players in Maryland history, bashing his way to high school All-American honors as a member of the St. Michaels Saints and American Legion Post 70 in Talbot County. Baines was selected first overall in the 1977 amateur draft by the Chicago White Sox. He debuted with the White Sox in 1980 and never looked back, becoming the face of the franchise for the next decade. Baines became a perennial All-Star over his 22-season career (1980-2001).
He began as a right fielder before evolving into one of baseball’s best designated hitters in the 1990s. Baines became an in-demand bat for hire serving six different franchises. He compiled 2,866 hits (34th all-time). His number has been retired by the White Sox and he earned a World Series ring as a coach on the franchise’s 2005 championship club.

Known as “Swish” or “Big Bill,” Bill Nicholson was one of the 1940’s top power hitters and one of the most beloved players in Chicago Cubs history. Nicholson was a corn-fed farm boy who grew into a hulking man on his family farm outside of Chestertown. After starring at the local high school and Washington College, Nicholson plied his trade with the Philadelphia Athletics (1936), Chicago Cubs (1939-1948), and Philadelphia Phillies (1949-1953) for 16 seasons. Nicholson led the National League in both home runs and runs batted in during the 1943 and 1944 seasons, finishing third and then second in Most Valuable Player voting. Nicholson earned five bids to the All-Star Game and generally menaced National League pitching en route to 235 career home runs and 948 career runs batted in. Nicholson was a member of the 1945 National League champion Cubs, the franchise’s most recent pennant until their 2016 victory in the World Series.

Delino DeShields Jr. has emerged rapidly as one of baseball’s most exciting centerfielders. Born in Easton, DeShields has finished in the top 5 in stolen bases in the American League on three occasions. He has earned a reputation as one of the league’s best defensive outfielders, too—well known for flashing the leather and also for gunning down runners with his rifle of a right arm. DeShields began his career with the Texas Rangers (2015-2019) but was traded to the Cleveland Indians before the 2020 season. DeShield’s father, Delino DeShields Sr., was born in Seaford, De., and became a standout second baseman for the Montreal Expos and Los Angeles Dodgers during the 1990s. He is widely regarded as one of the best baseball players to come out of the Old Line State.

Elkton’s own Bob Jones had a unique Major League journey. Following his 1967 selection by the Washington Senators in baseball’s amateur draft, Jones was drafted into the U.S. Army and served in the Vietnam War, earning a Bronze Star for his service. After returning to the United States, Jones worked his way through the Texas Rangers’ minor league system and reached the big leagues in 1974. After brief stints with the Rangers (1974-1975) and the California Angels (1976-1977), the first baseman headed to Japan and spent two seasons with the Chunichi Dragons of Nippon Professional Baseball. Jones returned to the Major Leagues in 1981 and spent the next half-decade platooning at first base and in the outfield for the Texas Rangers (1981, 1983-1986). Following his MLB career, Jones saw great success as a minor league manager. He is the winningest manager in the history of the Texas Rangers’ AAA Oklahoma City RedHawks (2002-2008).

Born in Chestertown and raised in tiny Edesville, Ryan Thompson starred at Kent County High School and was selected in the 1987 draft by the Toronto Blue Jays. Thompson played in nine Major League seasons between 1992 and 2002. He was one of the National League’s best defensive outfielders while a member of the New York Mets (1992-1995). During the strike-shortened 1994 season, Thompson finished fifth in the National League in fielding percentage for outfielders. In 2000, Thompson was part of the supporting cast that led the New York Yankees to their 26th World Series championship.

This one is a bit of a fudge, as Don Zimmer originally hails from Cincinnati. But before going on to spend seven decades in big league baseball as a player and manager, Zimmer began his professional career with the Class ‘D’ Cambridge Dodgers of the dearly departed Eastern Shore League (1922-1949), which produced an abundance of Major League talent despite its lowly status within organized baseball. Zimmer was a scrappy and versatile middle infielder who parlayed his in-game smarts into managing jobs with the San Diego Padres, Boston Red Sox, Texas Rangers, and Chicago Cubs.

Cambridge native Darcy “Jake” Flowers was a scrappy and cerebral middle-infielder during the 1920s and 1930s. Flowers played for the St. Louis Cardinals (1923, 1926, 1931-1932), where he was a member of the Cards’ 1926 and 1931 World Championship clubs. The shortstop-second baseman also spent several seasons with the Brooklyn Robins/Dodgers (1927-1931, 1933) and finished his career with the Cincinnati Reds (1934). Following his playing career, Flowers spent the next quarter-century coaching minor league teams and serving as a bench coach for several Major League teams.

John Franklin “Home Run” Baker was the first baseball great to emerge from Maryland’s Eastern Shore. Baker grew up in the tiny town of Trappe, on a farm that had been in the family since Colonial times. He was one of the greatest sluggers of the “dead-ball era,” when large parks, rule changes, and adulterated pitches held back power-hitters, and he led the American League in home runs on four occasions (1911-1914). He earned his nickname during the 1911 World Series, when he hit a pair of home runs and led the Philadelphia Athletics to a six-game triumph over the New York Giants. Baker played for three World Series champion teams for the A’s (1910, 1911, 1913). Following his retirement in 1922, Baker briefly managed teams in the Eastern Shore League and returned to his hometown of Trappe, where he spent the next four decades serving in a number of capacities in municipal governance. Baker was inducted into the Baseball Hall of Fame in 1955.

“The Beast,” as he was called by the many pitchers that feared him, is undoubtedly the greatest baseball player to ever come from Maryland’s Eastern Shore. Jimmie Foxx grew up on a farm in Sudlersville in rural northern Queen Anne’s County. He played in 21 Major League seasons (1925-1945), and was one of the greatest players in the history of both the Philadelphia Athletics and Boston Red Sox. Foxx was a genuine country hoss, burly and blessed with as powerful arms and legs as anyone in baseball history. He won the American League’s MVP award three times and earned a pair of World Series rings with the A’s. Foxx was the second player in MLB history to hit more than 500 career home runs (he finished with 534). He was enshrined in the Baseball Hall of Fame in 1951 and was ranked baseball’s 15th best player of all time by Sporting News in 1999. Foxx played most of his career at first base, so placing him at catcher is admittedly a bit of a shoehorn, but the fearsome slugger did serve as A’s backup catcher behind the legendary Mickey Cochrane. The town of Sudlersville erected a statue of Foxx in 1997 in a small park on Main Street.

Born in Salisbury, Bruce Howard was ever so briefly one of the American League’s top young pitchers. Howard was a lanky 6’2” fire-baller who moved quickly up the Chicago White Sox’s system in the mid-1960s. He joined a robust White Sox pitching staff, which included all-stars such as Gary Peters and Tommy John, but quickly asserted his position within the rotation. Howard earned nine wins in both 1965 and 1966 while posting an impressive 2.30 earned run average in 1966. Arm trouble soon compromised Howard’s burgeoning big league career, which ended after brief stints with the Washington Senators and Baltimore Orioles during the 1968 season. Howard eventually became the elder of a two-generation big league family. His son, David, spent nine seasons as an infielder with the Kansas City Royals and the St. Louis Cardinals during the 1990s.

Current Baltimore Orioles reliever Evan Phillips was born in Salisbury and spent his early childhood in Ocean City before his family relocated to North Carolina. Phillips starred at UNC-Wilmington before being selected by the Atlanta Braves in the 2015 amateur draft. In three MLB seasons, Phillips has shown significant promise as a long reliever for the Braves (2018) and Baltimore Orioles (2019-2020). He possesses a heavy fastball and an array of off-speed pitches. Phillips is the 25th Maryland native to suit up for the O’s.

Dwayne Henry’s baseball odyssey began in Elkton and took him to six Major League teams over 11 seasons between 1984 and 1995. Henry’s family relocated to Delaware during his childhood and he starred for Middletown High School, impressing Texas Rangers scouts enough to use a second round pick on him in 1980. Henry spent nearly a decade in the Rangers organization, bouncing between their farm clubs and the majors. In 1989, Henry caught a break when the Rangers traded him to the Atlanta Braves. Atlanta manager Bobby Cox turned Henry into a trusted long reliever. Henry spent the first half of the 1990s as an in-demand long reliever on several Major League teams.

Red Sky in the Morning

by Gary Reich Despite avialable warning and accurate forecasting, Bay boaters were caught off guard 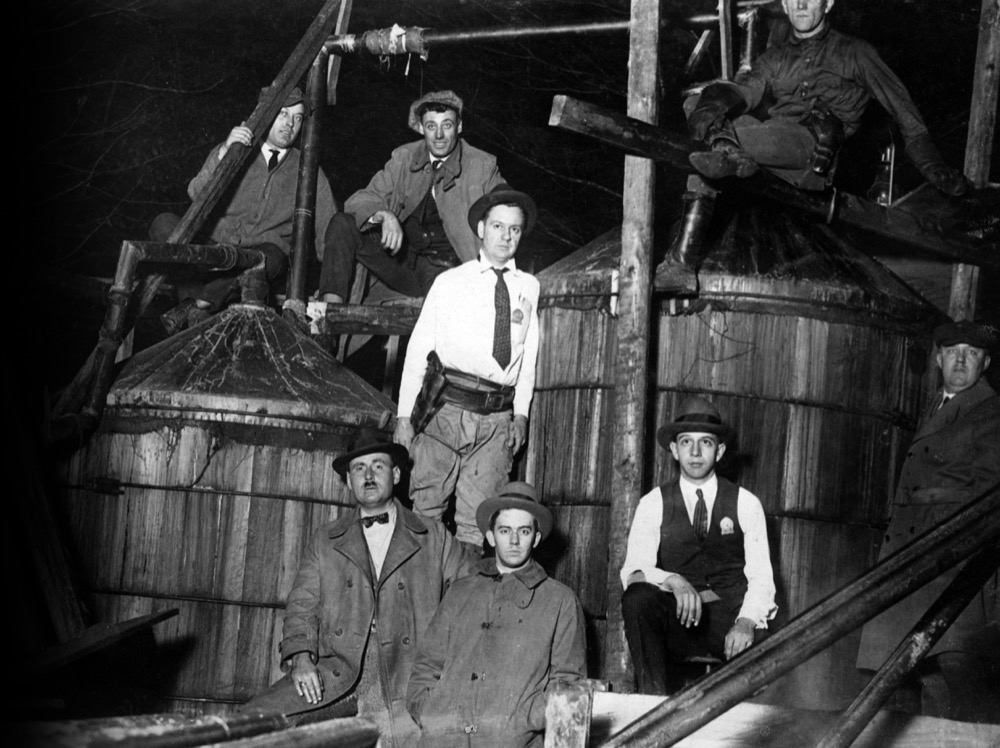 Prohibition on the Chesapeake Bay